A Department of Transportation and Works spokesperson told VOCM on Thursday, November 5, 2015 that “the walls within Waterford Valley High that need further supports are walls between classrooms, and says there are no issues on the walls that provide the main structural integrity of the building.” (underline added)

The Spokesperson was commenting on Uncle Gnarley Blog’s exposure of a cover up of structural deficiencies in a second St. John’s school; this time the new Waterford Valley High.

But a highly experienced engineer, who advised me on this file, says the Department of Transportation and Works is downplaying an important structural issue.

He says that if the walls between the classrooms “need further supports”, as the Government has now acknowledged ,and evening work activities at the school confirm, without those supports the walls can collapse. 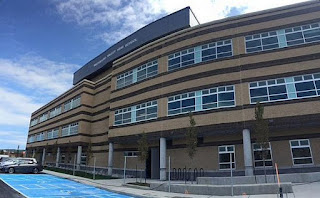 English School District (NLESD), in its communication with parents, also echoed the position of the Transportation and Works Department (TW). NLESD says: “Inspections of our school identified some walls requiring lateral supports; these are partition walls between classrooms. There are no issues with walls that provide the main structural integrity of the school.” (Underline added)

Both TW and NLESD give the impression the missing structural members are unimportant. They seem to have, already, forgotten the Roncalli wall collapse. The walls at Waterford Valley High are also constructed of concrete block.

The engineer I consulted states: “There is no grey here; either the walls conform to National Building Code standards or they don’t.” He says “the Code is very precise; the structural members, including those missing lateral supports, are required to accommodate all the loads which the design engineer has calculated and on which he would have based the design specifications. So, someone has made a decision to occupy a sub-standard structure.”

The Government's own revelations have given focus to a second, and related, issue.

The Transportation and Works Department told VOCM: “It was determined there was no risk to staff and students, and that remedial work could be completed after occupancy.”

The spokesperson did not identify the Structural Engineer or release a copy of that the documentation signed by that engineer confirming Waterford Valley High School is structurally ready for occupancy.

Today, I am calling for the immediate release, to the public, of that Certificate.


Its release will help allay public concern over questions of public safety which have been exposed by Uncle Gnarley Blog.
Posted by Des Sullivan at Friday, November 06, 2015