What is the public to make of the Premier’s ‘scrum’ in Corner Brook, on the Maritime Link? When the Premier states that Emera sanctioned the Link months ago, how is a typical person to recognize danger signals when a political leader engages in an economy of the truth?


One would have to ask: Who can you believe? What is the truth?


The Premier is supported, in her position, by a Nalcor V-P, who is a signatory to the Sanction Agreement with Emera. “The project has already received sanction…” said Gil Bennett, but confirmed, in the same breath, that Emera  "was asked to come up with more energy...we continue to have dialogue with Emera on that point….but the obligation is Emera’s…..”  Gil did his best to avoid the trap, but came pretty close to putting the words “conditional sanction” in the same sentence.
While the Premier detests having to share information, knowing as she does that the Government knows what is best for us, shouldn’t she be challenged on specific details?  A good question might be: can Emera be “in” and “not in” at the same time?    If the answer is “no”, that ‘scrum’ in Corner Brook is a perfect example of why the public are in the dark over the risks of Muskrat Falls.


In addition, the Premier’s reassuring utterance that Mr. Wangersky is no friend of the Tory Government should have elicited a response that reminded her of the supposed independence, not just of Mr. Wangersky, but of all the media.


That said, when the Premier said EMERA had ‘sanctioned’ the Muskrat Falls Project, “months ago”, she implied that BMO Capital Markets was completely out of line in its assessment that the Maritime Link had only a 50/50 chance of being sanctioned.


The public must surely have wondered how it is that the Bank of Montreal, with all its high priced talent, could possibly have gotten it so wrong.  Perhaps, I am overstating the Premier’s credibility. Do you think that the BMO analysts had failed to read the Emera Sanction Agreement? I would doubt that.


When you know something to be true and someone like the Premier says ‘no, you are wrong’, it does cause a bit of whiplash.  You are forced to ring people up and enquire if you had misunderstood certain details, to ask questions, answers to which are boringly obvious.  It gets you told: ”read the bloody legal agreement.”


Was the Premier truthful? Or, did she impose certain efficiencies on that virtue?


Let’s put this matter of “sanction” in perspective.


Individuals who have purchased or sold a house, or know someone who has, understand the difficulties involved.


Just like a person who agrees that the sale is subject to the purchaser obtaining confirmation that the roof doesn’t leak, the Vendor has signed what? He has accepted a “Conditional Sale Agreement”.  If the roof leaks, the Purchaser can walk away from the deal, unless he chooses to waive the condition or the Vendor gives him a new roof.


There is nothing unusual about such an agreement except, if you try and convince yourself your house is sold, even if the “conditions” aren’t satisfied.


Was the Agreement that Nalcor signed on December 17, 2012 “unconditional” or, like the agreement of sale on our typical home, did it contain “conditions”, which if unfulfilled, would permit the other Party, in this case EMERA, to “walk”?    The answer is YES; the agreement contained such “conditions”.


Is it a fact that the conditions have not been satisfied as of this date and that the agreement remains “conditional”? Yes. What else? Emera has chosen not to waive those conditions.


Can I show you further proof that the Sanction Agreement is “conditional”?  Yes, I can.


Let me first remind you that the NS UARB placed “conditions” on Maritime Link construction. The probability that UARB approval might be “conditional” inspired Emera to hedge its bets and to make the Sanction Agreement “conditional”, too.


Am I saying that the Sanction Agreement actually reflected the possibility that the UARB might not give Emera “unconditional sanction”? Yes, it did. Can I show you the “smoking gun”?


How about I provide you with an excerpt from Part 4 of the Sanction Agreement?


What does it say?


It says that Emera shall proceed to construct and commission the Maritime Link in accordance with the UARB decision and the ML-JDA (Maritime Link-Joint Development Agreement) if the NS Regulatory Application is "approved as filed…”  (See the excerpt from part 4 of the Emera Sanction Agreement below.) 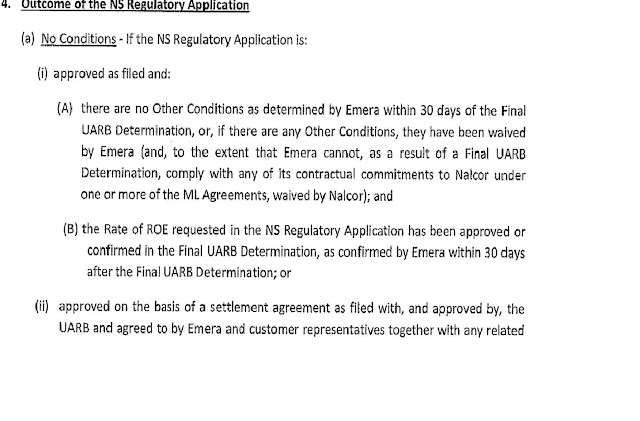 Did the Agreement use the word “IF”? Yes. What is peculiar about that word? Your English teacher would tell you "if" is a subordinating conjunction introducing a dependent clause.  For example: if your paycheck arrives I shall deliver it to you.  Another example might be: if the UARB agrees to Emera's Application the Company will proceed with sanction.

Was the Application to the UARB "approved as filed”?  No.  Has Emera “waived” those conditions, which is its right?   No.  And, to this day, the conditions contained in the “Sanction Agreement” have not been met? That is correct.


Are there other conditions in the “Sanction Agreement”?  Lots of them.
Everyone recognizes that Emera’s investors demand that their investment is paid back along with a rate of return.  That is why the “unconditional” approval of the UARB is essential.


Once again, did Emera “sanction” the Maritime Link “months ago” as the Premier stated? NO.

Did Emera, in fact, sign a “Conditional Sanction Agreement”? Well, the word “sanction” wasn’t used on the cover page of the agreement.  Is that important? Don’t be a smart ass.


Is the Premier being deceitful?  Did she lie?  That is not parliamentary language.


Then did the Premier use “an economy of the truth”?  Now, that phrase is acceptable.