On June 13, the Telegram published a letter I had written under the heading: “It takes a province to stabilize the economy” In that letter, I expressed the opinion that “we are facing a critical period for the next few years, and our MHAs are mistaken if they fall into the mindset that only they have the sole obligation, right, and expertise to solve the problem.” I added that “it can’t be done in four years. It may take four times four years, and even different colours of government.”  I also noted that “the people of Newfoundland and Labrador have indicated clearly that they also get it; they understand and recognize the need to tighten belts, cut back on programs and find more efficient ways to run essential elements, and they even realize they have to pay more taxes.” They just seek less draconian measures!

On June 18, the Telegram kindly published a sequel to the June 13 letter in response to readers who had asked for details on how the public could be involved in the economic crisis, under the heading: “Involve the people in the process”. I suggested a four-step process which called for a meeting of the minds (and bodies) of the Premier, the Opposition Leaders, and the Independent Member of the House of Assembly to establish a dedicated Task Force “which would focus solely on our fiscal and economic challenges in order to develop a long-term strategy for getting rid of our untenable burden of debt while nurturing reasonable (not “mega”) but steady economic growth.”

Email ThisBlogThis!Share to TwitterShare to FacebookShare to Pinterest
Labels: Edsel Bonnell, It Takes a province to stabilize the economy

CAN A DISGRACED P.C. PARTY SURVIVE?

The abrupt end to the Opposition filibuster in the House of Assembly on June 8th served to underscore the larger issue of the Tories’ legitimacy as Her Majesty’s Loyal Opposition.
Government House Leader Andrew Parsons told the media that the Tories “were agreeable to finishing up”. As well they might have been. Even if the Liberals’ budgetary measures were misguided, as many deem the case, only the mindless would be capable of denying that Tory fiscal mismanagement was the root cause of the debate in the first place. 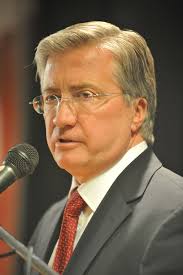 The Sitting was the first of the 48th General Assembly. In the preceding General Election, the remnants of the Progressive Conservative Party had been sent to the Opposition benches less by a Liberal juggernaut than by its own determination to self-destruct.

A province is facing penury from overspending and a reckless energy strategy devised by a bunch of ‘rink rats’. A vulnerable society, one perennially on the edge, has seen its tenuous financial stability frittered away in less than a decade.

Opposition Leader Paul Davis still recites lines that reflect blissful economic ignorance of our current circumstance. More frequently, Keith Hutchings is sent out to play the Opposition role. The smiley Member for Ferryland tackles important budgetary issues as if he were commenting on a sporting event. Gravitas is lost to sound. Incredulity is grafted onto light-weight. Bemusement is the consequence.

My fellow "naysayer", David Vardy, and I had great hopes when we met with the Consumer Advocate following the announcement of the reference to the Public Utilities Board.

The reference followed our request to the then Minister of Natural Resources, Shawn Skinner, to lift the exemption of the project from the purview of the Public Utilities Board. While a reference wasn't what we asked for we felt that it was a positive response and there is no question that a lot of information came out of the process.

At our meeting, the Consumer Advocate outlined a process which would allow for public input into his representation of the public before the Public Utilities Board. That never happened and instead he followed his own inclinations and became a strong advocate for the project.

Introduction
When the government of the day sanctioned Muskrat Falls in December 2012 they subjected the province to enormous risks. They gambled the future of the province and inflicted what is proving to be great damage on a public which was far too trusting of their leaders. They bet the farm on increasing energy prices and we have as a society begun to suffer the consequences.

Since 2012 the fiscal position of the province has eroded substantially, as indicated by the fact that the interest cost on our debt now exceeds our expenditures on education. Our per capita debt is higher than any other Canadian province and higher than beleaguered Puerto Rico. Our deficit, as a proportion of GDP, is 13 times that of the average Canadian province.  We are borrowing 35% of our total spending, a cash deficit of over $3 billion, at a rate which cannot be sustained.

IN PRAISE OF PUBLIC FLOGGINGS

Some people need to be hoisted on their own petard.

Individuals who are paid from the public purse, and who use a public platform from which they derive credibility, should be held to account when they use poor judgement by choosing to favour political interests over the public interest.

A society looks to all leadership, especially those who occupy important positions in our institutions. Memorial University’s Wade Locke is one such example. Such people are often given the privilege to counsel the highest leadership, and to influence public policy.

Others, like the Consumer Advocate, hold an official Office.

Such an appointee is thought to speak for the public at the exclusion of all other interests. The presumption is that he will keep his distance from those who would influence him for a less than honourable purpose.

It is true that the explosion of “consultancy” roles in government and its agencies, especially during the recent years of free spending, has given rise to a new kind of “boondoggle”. Yet the proliferation of paid “advisors” does not justify the lowering of professional standards nor condone any less than the highest levels of integrity in those performing such roles.
Read more »
Posted by Des Sullivan at Monday, July 04, 2016