Regulatory Reviews Did Not Endorse Project
The Report of the Joint Review Panel of August 2011 expressed serious reservations about the project in terms of the business case. They concluded that

“Nalcor had not demonstrated the justification of the Project as a whole in energy and economic terms, and that there are outstanding questions related to both Muskrat Falls and Gull Island regarding their ability to deliver the projected long term financial benefits to the Province, even if other sanctioning requirements were met. The Panel therefore recommended that the Government of Newfoundland and Labrador carry out separate formal financial reviews before sanctioning either Muskrat Falls or Gull Island to confirm whether the component being considered for sanction would in fact deliver the projected long-term financial benefits.” (Executive Summary, page xiii).

The Public Utilities Report of March 30, 2012, on a limited reference from the provincial government, concluded that

“The information provided by Nalcor in the review is not detailed, complete or current enough to allow the Board to determine whether the Interconnected Option represents the least-cost option for the supply of power to Island Interconnected customers over the period of 2011-2067, as compared to the Isolated Island Option.” (page 80)

Principal Beneficiary: Newfoundland and Labrador or Nova Scotia
The Term Sheet of November 2010 provided that Emera would receive 20% of the energy for 20% of the cost. Their 20% investment went into construction of the Maritime Link which would carry up to 500 MW of power. This Link would be made available to Nalcor so that it could export surplus power to customers in the Maritimes and in New England as well as carry 1 billion kWh of energy, representing 20% of the 4.9 billion kWh from Muskrat Falls, the so-called Nova Scotia block.

The federal role in the project was justified on the basis of the benefits to other provinces in the Atlantic region, in addition to those enjoyed by Newfoundland and Labrador. Nova Scotia was fortunate in having a strong federal Minister, namely Peter McKay, who supported the Muskrat Falls project, on the basis of the considerable benefits to Nova Scotia. The federal loan guarantee was contingent upon power exports to Nova Scotia.

The original projections provided for 40% of the power to be used in NL and 20% in Nova Scotia, with the remaining 40% available for export to other markets. The projections released by Nalcor CEO on June 24 suggest that NL load growth was significantly overestimated. Instead of 40% of Muskrat Falls power the amount required by NL in 2021, the first year of full power, will be less than 25%. The share of Muskrat Falls power required in NL will not reach 40% until 2030.

At the outset this project was rationalized as being mainly for the benefit of NL. This proposition was weakly supported at the time and is now clearly inaccurate. It will provide far more benefit to the province of Nova Scotia than it does to our province. The case for a larger federal role is therefore strong, provided that there is an economic case for going forward.

Escalating Equity Demands
The estimated project cost is now $11.4 billion, with guaranteed debt supplying $5 billion and with equity investment of $6.4 billion, with $0.5 billion invested by Emera and $5.9 billion by Nalcor and the government of NL. All increases in cost have been sourced by larger and larger equity contributions by the province.
The following table and chart show the growing equity demands on the province, demands that have been met by provincial borrowing, so that the term “equity” is really a misnomer. 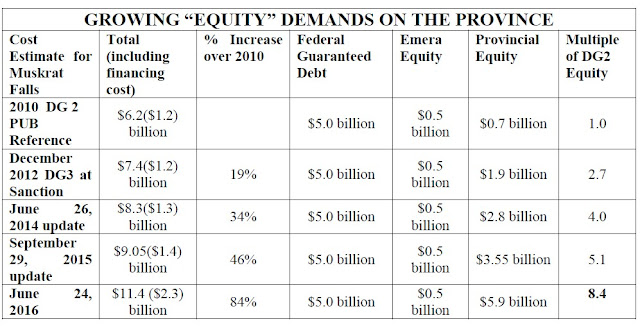 The table (above) and chart (below) show the escalation in cost and how the full impact of each increase in cost is borne by the province. The latest cost estimate of $11.4 billion raises the demand for equity from the province and Nalcor combined to $5.9 billion, a multiple of 8.4 of the 2010 value. The dramatic realignment of the financial burden makes a strong case for greater federal participation. 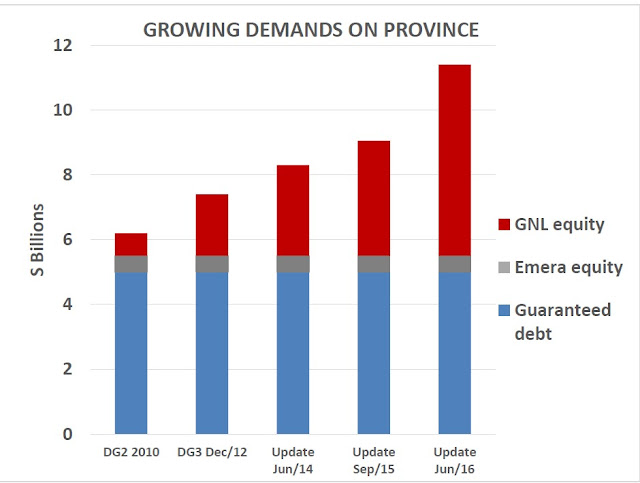 Lower Churchill Development Corporation (LCDC) Model
The Lower Churchill Development Corporation (LCDC) was created in 1978 as a jointly owned federal provincial corporation to develop the Lower Churchill. The LCDC did not proceed beyond the planning stage, partly because of insufficient load growth, combined with the fact that the capacity of the Muskrat Falls and Gull Island projects was far greater than our energy needs. Lack of progress can also be attributed to the difficulty in gaining transmission access through Quebec other energy markets. The formula for equity participation was 49% federal and 51% provincial equity.

The funding formula embodied in the LCDC Agreement should be explored either as an alternative to, or in combination with, the lifting of the $5 billion cap. Money borrowed underthe guarantee continues to be a contingent liability of the province, while federal equity participation reduces the financial burden on the province, making this a preferred option.

This LCDC model would allow for the injection of federal funds in the form of equity. The LCDC was based on 49% equity from the federal government and 51% from the province. Based upon the current $11.4 billion cost estimate the equity share is $5.9 billion. Applying the LCDC model could relieve the province of the obligation to inject $2.9 billion, leaving it to finance $3.0 billion in “equity”. There are many other variations of this funding model but injection of federal equity would reduce the pressure on the province at a time when the province is financially stressed.

First, the burden upon the province has increased significantly since the Term Sheet of 2010 and the decision to sanction in December 2012. It was unrealistic at the outset for the province to assume full responsibility for a completion guarantee pursuant to the loan guarantee agreement.

Second, the federal government was complicit in the decision to proceed, notwithstanding strong caveats expressed by a joint federal provincial environmental panel and by the province’s public utilities board.

Third, the share of the energy which will be consumed within the province has dramatically changed, partly because of Nova Scotia’s strong leverage, arising
from the fact that the federal guarantee was contingent on the participation of Nova Scotia, leverage which was used to renegotiate the parameters of the Term Sheet, giving Nova Scotia access to close to 50% of the energy, compared with the original 20%.

Recommendations
It is recommended as follows:

1. That the province seek an injection of federal equity into the project, along the lines of the LCDC model. This equity should be structured in such a way as to make the return on equity contingent on the performance of the project and should not be modelled on the equity participation of Emera, which guarantees a regulated rate of return.

2. That the federal government and the province commission an independent and expedited cost benefit analysis of a variety of options, particularly that of suspending the Muskrat Falls project at the site, preserving the assets and renegotiating all construction and power supply contracts, as compared with finishing the project as planned. The transmission lines would continue to be built and can be used to carry remaining Churchill Recall Power and also to wheel a block of Churchill power purchased from Quebec. The power purchased could be used to meet our obligations to Nova Scotia. Our own energy demands have now been reduced due to the reduced load growth, reducing the amount of power required for the Island.

3. This independent cost benefit analysis should be considered by the federal government to be a minimum condition precedent to going forward with the project. Failure to conduct such an analysis in the light of dramatic changes in project cost and schedule and the fundamental changes which have taken place in energy markets would be a dereliction of duty by both the federal and provincial governments. Apart from any question of federal funding the province should undertake this analysis before proceeding further.

4. That both governments make appropriate decisions with respect to the completion or suspension of the project, in whole or in part, on the basis of this independent expedited cost benefit analysis, while allowing the project to continue only at a reduced and cautious pace until the analysis is completed.