The energy industry consistently selects projects that can deliver competitively low LCOE numbers, however, Nalcor avoided this technique in favour of a customized and burdensome Cumulative Present Worth analysis that avoided illustrating the true economic merit of Muskrat Falls.  Although the LCOE metric was front and center in the Nova Scotia regulatory hearing for the Maritime Link, it was avoided by Nalcor and Government here.  Little wonder, as Muskrat’s LCOE is nothing to be proud of.

Reference data for this post is sourced from Lazard, an international consulting firm widely trusted for their annual LCOE reports.  Their full 2018 report is available here.

Hydro projects are not reviewed by Lazard because they are so rarely an option for utilities.  Capital cost wise, hydro tends to way up with the most expensive category, nuclear power plants.  At sanction, Muskrat was at Lazard’s low-end of the nuclear cost range but with Muskrat’s updated costs, it is now at the very high end for nuclear.  This is not a promising beginning but LCOE factors in the capital cost and all other operating and maintenance costs.  As water flows are considered a free energy source, could Muskrat’s LCOE look better than nuclear? 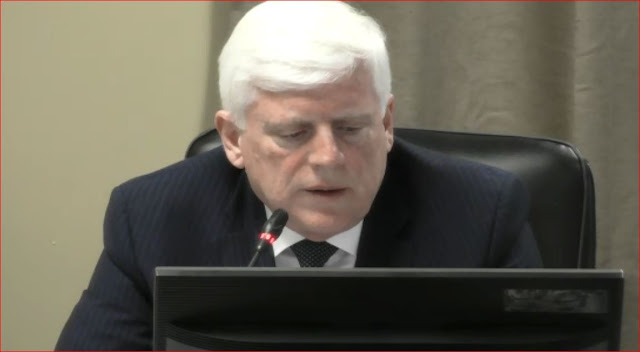 Below is the Lazard chart for expected LCOE in $ per MWh for a variety of generation solutions.  Underlying assumptions include reasonably competitive bidding, ordinary construction challenges, and conditions that are presumed suitable for the solar and wind renewables.  Onshore wind and utility solar lead the pack, closely trailed by natural gas combined cycle thermal: unsurprisingly these are project types most frequently built by utilities in recent years.  Lazard probably isn’t being overoptimistic on their cost projections either: consider both Alberta and Saskatchewan where recent bids for wind projects achieved costs of only around CDN$30/MWh (3 c/kWh), considerably bettering Lazard’s numbers. 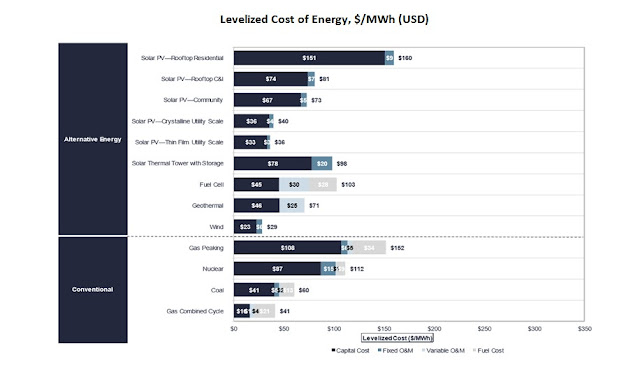 At the PUB Muskrat Review in 2012, Nalcor offered no LCOE guidance until they were compelled to respond to a request to do so from the Consumer Advocate.  Based on the project’s total capital estimate of $5.0B at that time and the energy forecast of the day, Ed Martin’s Nalcor projected Muskrat LCOE to be $208/MWh (20.8 c/kWh).

Reviewing the chart above, Muskrat energy cost is higher than nuclear and the only possible comparable is the “gas peaking” plant.  Such a facility is presumed to utilize inefficient combustion turbines to meet peak loads during high demand seasons, likely running just hours per day.  Peaking plants are standby facilities that deliver relatively little power for their costs: as a result, they are a last resort option within the utility industry.

Conservation measures to reduce high demand peaks would normally be mandated before investing in peaking facilities.  As shown in PlanetNL21, conservation measures would have been ideal to address the Island’s highly seasonal winter electric heating demand.
Nalcor chose to ignore Government’s own Energy Policy objective to pursue conservation, and instead embraced the volatile seasonal electric heating needs: Muskrat is a peaker plant.  This is blatantly confirmed in NL Hydro’s new Cost of Service Study submitted to the Public Utilities Board on November 15, 2018, where the utility has classified Muskrat as a peaker equivalent.

First, given capital cost escalation from $5.0B to $12.7B, Nalcor’s LCOE estimate must be scaled up to over $500/MWh (50 c/kWh).  This is much worse than Lazard’s estimate for nuclear or a gas peaker – industry analysts who’ve never heard of Muskrat would no doubt be shocked at this result for a hydro project.

The next problem is Nalcor’s overly optimistic energy forecast.  Stan Marshall’s Nalcor, in 2016/17, officially slashed the total Island energy forecast, removing most of the new load growth his predecessor had banked on.  If Stan Marshall’s Nalcor were to offer a revised LCOE estimate it would likely exceed $1000/MWh ($1.00/kWh).  That’s nearly 10 times that of a nuclear plant and at least 5 times that of a gas peaker.

That’s not the last issue though.  Marshall’s load forecast remains unrealistically high as presented in PlanetNL20.  Given the big cost increases about to be hurled on ratepayers, those who can dramatically cut their seasonal electric heating usage through substitution will cause a significant drop in total energy sales.  Those who can’t afford to go the substitution route are condemned to energy poverty.  This troubling socio-economic inequality, facilitated by Nalcor and Government’s refusal to sponsor conservation, creates a scenario where some limited usage of Muskrat energy could remain necessary.

At next year’s Muskrat rate mitigation hearings at the Public Utilities Board, Nalcor will presumably be once more asked to formally present LCOE costs to the public.  Despite efforts to keep such numbers very quiet, it’s apparent that Marshall and Premier Dwight Ball already understand the situation.  They have appealed to ratepayers to not abandon electric heat and are encouraging more electric heating on the island, worsening the seasonality problems that spawned Muskrat in the first place.  Even in the unlikely chance Marshall’s energy forecast could be realized, the best-case $1000/MWh supply cost is a disastrous outcome when other Provinces are expanding their electricity supply at just $30/MWh.

Emera LCOE – Nova Scotia Regulator Succeeds in Examining LCOE
While Nalcor and the NL Government exempted Muskrat from a full regulatory review and approval process, Emera was required to have its Maritime Link project approved by the Nova Scotia Utility and Review Board (NSUARB).  LCOE featured prominently in the regulatory hearings and initially the project was rejected by the NSUARB for not being the lowest cost option.

Based on the allotment of 980 GWh of firm supply from Muskrat, as agreed in the 2010 Term Sheet between Nalcor and Emera, and despite the energy being supplied by Nalcor at zero cost of energy, the Maritime Link’s LCOE exceeded $150/MWh (15 c/kWh) and this simply was not competitive enough in the determination of the Board.  The final decision document from the NSUARB contained the chart below where the dotted line at the represents the rejected scenario. 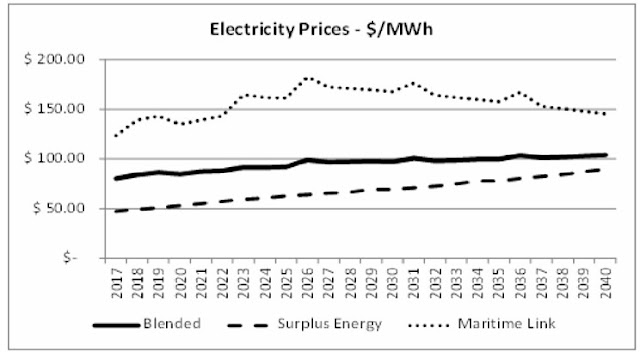 The whole Muskrat project was in jeopardy until Nalcor delivered the Energy Access Agreement, an add-on deal allowing Emera to buy 1200 GWh of surplus power at no higher than New England wholesale auction rates as represented by the dashed line.  The expected average LCOE of the two energy contracts, shown as the solid line in the chart, was then under $100/MWh (10 c/kWh), an improvement that delivered NSUARB approval.
Since then, two additional factors have lowered Emera’s likely cost.  First, New England energy prices have fallen considerably thanks to the effect of increased wind penetration renewables and effective conservation efforts in this key US market.  Second, due to falling demand at home and diminishing export prospects, Nalcor will have way more surplus energy to offer.  Emera’s LCOE could easily fall to $80/MWh (8 c/kWh) or less – a level that competes very favourably with coal-fired plants in NS and will result in rate stability and potential rate reduction for Nova Scotia ratepayers.

While Emera’s LCOE goes from good to better, the LCOE of Muskrat energy sold to NL Hydro for Island ratepayers will be at least 10-20 times higher.
What if the PUB had Been Allowed to Decide on Sanction?
The initial rejection by the NSUARB justifies concerns of critics who decried Government’s refusal to allow the PUB to do a full and proper review of Muskrat.  Surely the PUB would have demanded an LCOE analysis and clued in to how uncompetitive and undesirable Muskrat costs were.  If $150/MWh was too much for the NSUARB, then surely Nalcor’s estimate of $208/MWh using the preliminary DG2 estimates showed Muskrat to be a rather poor value project.  Had updated DG3 estimates been prepared, the revised LCOE would have been close to $300/MWh.

The PUB would also compare Holyrood’s marginal cost of operation to the Muskrat LCOE.  In many jurisdictions, utilities are closing fossil fuel plants because their fuel cost per unit energy exceeds the all-in LCOE of new generation options.  Even in the years of very high oil prices, Holyrood cost no more than $200/MWh (20 c/kWh).  Now that is a very bad number by itself that deserved action, but the right action couldn’t possibly be to replace Holyrood with a project that would cost significantly more.

It is only logical to assume the PUB would have directed Nalcor to devise a strategy to lower the average cost of energy production, not increase it.  Unfortunately, the PUB was not allowed an opportunity to do so.


The Muskrat Inquiry called an expert witness in utility regulatory process, Dr. Guy Holburn, who not surprisingly gave Government and Nalcor an overwhelmingly negative grade for not allowing best practices in utility regulation to be followed as seen in the graphic below summarizing his presentation.  Nova Scotia and NSUARB, however, received an excellent grade. 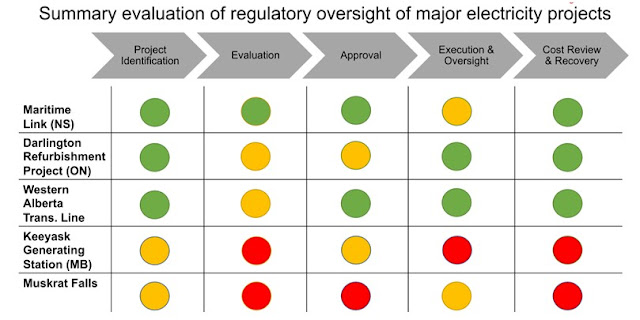 Had the regulatory review process been allowed to occur, Muskrat’s LCOE would have been just one of many red flag issues.  Independent consultants hired by the PUB would surely have taken issue with the massively overestimated energy forecast as well.  Exploration of just these two issues would have shelved Muskrat permanently.

An Expert Witness in Energy Planning is Needed for the Inquiry
Inquiry expert witnesses have offered exceptional insight but none have yet been engaged in the energy planning field.  The near-expert testimony of Philip Raphals and Jim Feehan should make the Commission keenly aware that Nalcor’s strictly internal planning was heavily biased toward justifying Muskrat and impairing the viability of alternatives.  The Commission needs to go the next step.

In brief, the Commission should engage an independent firm expert in supporting utilities and regulators in long-range forecasting, conservation and generation planning with instruction to evaluate the Isolated Island System and to recommend and rank strategies to achieve reliable least cost supply of electricity.  Secondly, the firm should be directed to provide a critique of the two-alternative CPW analysis.

Only by having an independently prepared assessment will the Commission have a baseline to determine the magnitude of Nalcor’s technical error.  While it would have been useful to have this presented prior to this point in proceedings, it is by no means too late.

The effort is simultaneously valuable to the Public Utilities Board and the cost may be more appropriately borne by the PUB.  The Board is likewise improperly informed moving forward without this analysis.  Potentially the Commission and the Board can jointly develop the Terms of Reference so that it fully meets the need of both.

Government – or any future Government – should also be keenly interested to obtain clarity on what the issues and opportunities truly were in 2012.  Democracy and governance will be poorly served if an independent expert technical analysis should never be completed.  Government also needs to realize it needs a solid backup energy plan as Muskrat hasn’t finished creating havoc yet – not by a longshot.