An auspicious start to a new career on the global lecture circuit recently occurred, your scribe having answered in the affirmative an invitation to address a small public policy group, called Ballicatters. The venue was a well-established local Pub, a perfect place to soberly test new and old material, in preparation for the big leagues. Naturally, I selected a barnburner of a title: “Fiscal Crisis: Will ‘hope’ repair a mess too deep?” Pretty catchy, eh? In pursuit of not just their heads but their hearts, too, I even added a subtitle and chose this one: “The Inevitability of Death by a Thousand Cuts”.

Soon after, the fight broke out.

(That’s not actually what happened, but it is as true as the Government’s accounting of the public debt I had planned to discuss.)

Now for the serious stuff. My purpose was to define the “real” debt of the Province and to evict the fictional sum that was reported in the Budget Estimates by the Minister of Finance, and the one reported by the Auditor General too.

I differentiated “Net” Debt ($15.8 billion) from “Total” debt ($24.2 billion, which includes “utility” debt) and demonstrated why neither figure is even close to the actual or “real” Total debt.

To begin with: the Budget Estimates still describe Muskrat Falls Debt as “self-supporting utility debt”. As it stands, the Furey Government is making a second effort to sell “Rate Mitigation” to the Feds. Any amount mitigated by them, or by the Provincial Government, implicitly undermines the notion of “self-supporting”. By what amount depends on the level of mitigation employed and if it must continue. In the case of Muskrat it must. Confirmation of this situation aligns not just with the Government's "mitigation" quest but also with a drop in and declining demand for power in the Province, an over-supplied U.S. market for export power, making surplus power all but worthless, together with the recent decision to keep Holyrood “warm” for back-up purposes.

Not an unwise Government, perhaps, but certainly a well-run public company would have already drastically “written down” the value of the asset, declaring it “sunk” cost. Instead, the fiction that Muskrat still has value is maintained which makes the difference between “Net” and “Total” Debt equally fictional.

Next, I moved on to a category of debt located in the “sleight-of-hand” column. This is debt worthy of the title “Debt by Asterisk” because, in the Budget Estimates, it gets a "Note" specifically stating that the item is not included in the Total Debt, absent even the tiniest explanation when it deserves the relative clarity of line accounting.

Thinking globally for a second, I expect that NL’s Finance Ministers will be sought out by worthies such as Britain’s Chancellor of the Exchequer and the Governor of the World Bank — for their exceptional creativity in the practice of making the obscure seem irreversibly innocuous. After all, the sum hidden from view amounted to $8 billion - no trifling asterisk for sure. (I’ll give the Auditor General (A-G) some credit; at least she includes this sum as a liability, even if she still recognizes Muskrat debt as “self-financing”.)

The Ballicatters Group naturally wanted to know what the (*) represented. Like me, they were gobsmacked by its size more than by its origins. The Exhibit (below) taken from the A-G Report for 2018-19, the latest available, ascribes $4.9 billion to “Unfunded pension liability” — in relation to a variety of public sector pension plans. Another $3.04 billion represents unfunded “Group health and life insurance retirement benefits”, known as “Post-retirement benefits” for public servants. Governments have underfunded those “benefits” for decades and, with public sector bloat, the figure is now an outsized disgrace, conveniently hidden in the Budget Estimates. 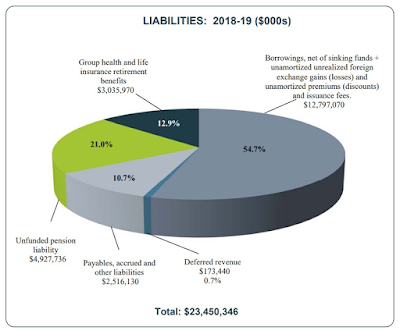 There is another category of debt — even more obscure — that is found neither in the Budget Estimates nor in the Auditor General’s Report.

That is the debt related to a scheme called “Public Private Partnerships” or P3s. You may recall that Premier Ball got very happy about raising this type of “off-balance-sheet” financing.

A scan of various news sites confirms that at least $1.58 billion was committed for the Corner Brook Hospital, the new Waterford Hospital, the HMS Pen, and several long-term care homes. The final figure is likely much larger but the funding requirements (most, if not all, 30-year contracts) are nowhere to be found.

Perhaps, in a new spirit of transparency, Premier Furey will give instructions to his Finance Minister to give a proper accounting of this new category of debt — that will soon become a major burden, further hindering any likelihood of ever correcting the deficit in the Current Account.

For my audience, I calculated the “Total” Debt of the Province as $33.61 billion. That figure was startling enough until, the very next day, I was reminded by someone of a public accounting pedigree that the debt of Crown Corporations (included in the Budget Estimates under “Total” Debt), actually does not include the long-term debt of the Regional Health Authorities. Evidently they have a different pedigree, too. In Yoda-speak, thankful for the advice was I.

In “my day” on the Hill, health care corporations were obliged to balance their Budgets; not now. Successive Governments, unwilling to curtail the spending habits of the health care sector, permitted them to use long-term debt instruments when their excesses struck up a competition with Government’s own.

Accordingly, capital debt and unfunded employee benefits (vacation pay, severance and sick pay) are recorded in the Audits of those entities in these amounts: Eastern Health — $107.4 million, Western Regional Health — $41.5 million, and Central Regional Health — $50.5 million. In total, that is another $199.4 million added to the category of “Total” debt, the Government being the only funding agency of those health care operations.

The additional sums raise the “real” Total Debt of the Province to at least $33.8 billion. Is this the last finding? I can't be sure.

Likely, you will not be surprised that Canada’s Parliamentary Budget Officer did not include NL among the Provinces whose current fiscal policy is sustainable.

I failed to mention to the Ballicatters Group that $33.8 billion represents $152,184 for each of the 222,100 (Sept. 2020) employed in the Province. Except for the ones starting their third pint, I doubt that any of the group left the Pub feeling any lighter than when they arrived.

For all of us, the Total Debt figures allow us to better understand why a "structural" deficit created during the years since 2013 is so difficult to reverse. In a Province that budgeted only $5.4 billion of revenue in the current fiscal year against capital and current account expenditures of $7.65 billion, two facts are sobering - apart from a reminder that pre-COVID revenues were only $0.5 billion higher - a large sum, except when it is compared with our persistent annual revenue shortfall. One is that financing costs (debt charges, pension and post-retirement benefits) ALONE now represent 27.8% of revenues. Add only Health Care and Education and spending exceeds 107% of provincial revenue.

This is sobering stuff in a place undisciplined, drunk on "hope", and misinformed for far too long.

The thought did occur to me though that, to be successful on the global speaking circuit, I might need a silver lining to this message of extreme indebtedness. Unable to think of one — except, that is, for death by a thousand cuts — I thought I might job-shadow the current or a former Finance Minister for a day.

Problem is, when you are told that the Debt of the Province is $15.7 billion and it turns out to be $33.8 billion - less than half of the "real" public debt - I don’t believe I’ll ever be able to write fiction as well as any of them!