Was there a conscious and deliberate decision taken, in 2014, to cover up an incident involving the collapse of a cinder block wall at Roncalli School?

Who knew of the incident? And who took the decision to bury the issue?

These questions are just a beginning.

Who would argue safety at a school is an imperative?

It seems not everyone.

The provincial government chose to permit Roncalli School, located in the Airport Heights area of St. John’s, to continue to function even as it underwent reconstruction on a piecemeal basis.

Roncalli became a school and a construction zone at the same time. That decision held inherent risks, and not just with respect to the additional cost of carrying on a major construction project on an occupied premises.

The risk of combining two incompatible activities demanded the highest possible safety standard for the 410 students enrolled K to Grade 6, distributed throughout 21 classrooms; the statistics provided on the School’s web site.

Background
Premier Kathy Dunderdale and then Education Minister Clyde Jackman announced the $20.7 million project for Roncalli Elementary School, in 2012.  Jackman was quoted in the Government’s Press Statement stating the “…project will see the construction of a large extension as well as the redevelopment of the existing school.

“(It) will include a new food service area, a gymnasium, and 20 new classrooms, while the redevelopment will reconfigure space to include four new classrooms, a multi-purpose/lunch room and a resource centre.”

Fast Forward to September 2014
As the school opening date became imminent, in September 2014, the English Language School District told parents, in a Letter, that the board will not open the school until Monday, Sept. 8; a week later than other schools. The CBC, reporting on the delay, said “Part of the
school remains a construction zone, and fences will be erected to prevent children from gaining access.”

Parents might have been left with the impression not just readiness but safety was a matter of paramount concern to the school board.

But an incident occurred two weeks after the school opened, on Sunday, September 21st 2014, that tested any such preoccupation. The incident brings into question those who had knowledge of the incident - their judgement possibly as deficient as the cinder block wall that disintegrated on that windy afternoon.

The concrete block wall was two storeys high and measured 25 feet by 50 feet.

The Contractor’s Report, found by this Blogger, stated an employee “entered the site at 5:42 pm, Sunday September 21, 2014 and noticed that the wall had collapsed”. Winds, “at that time”, were estimated at between 40-60 km.

The Contractor's Report is important for two reasons. First, it proves there was plenty of time to warn of the need to close the school and to advise the parents and the public of what had occurred.

Of course, if wind was the sole reason for the collapse of the wall the secrecy would still not be justified.

But the wind was just a trigger, not the cause.

As to the reasons the conditions existed, the Report states: “workers didn’t take time to dowel in rebar or ensure that plates were attached to wall”.

It did not say anything about supervision or inspections but then that was not its purpose.

The Report also notes a second cinder block wall was partially completed but had not collapsed.

When the school buses began to arrive 14 hours after the contractor’s man reported the incident, government Inspectors had not written the contractor a “stop work” order.

In fact, no “stop work” order was ever issued.

No structural engineer had even begun to inspect the collapsed works by the time the school opened on Monday morning.

Students were permitted on the site and within the premises; instruction was permitted to continue in the absence of a Report, from either a qualified or an independent entity, detailing why the wall had collapsed or if the building was safe for entry. Government was in possession only of a report prepared by the contractor.

They were not in possession, either, of analysis or investigation as to whether other newly constructed concrete block walls on the premises were built sub-standard and at risk of collapse, too.

In contrast, when a a three pound clamp fell from the GFS Grand Banks offshore drill rig Husky suspended operations pending an investigation.

Material dropped from a crane at Muskrat Falls is described as a “serious safety incident”; the whole site is shut down.

Both incidents lead the news at every outlet.

At Roncalli, the children were none the wiser the school had experienced a significant incident with major safety implications.

The parents weren’t notified that the incident had occurred.

There was no public announcement, then or since.

It wasn’t on the public media; social media or otherwise.

The incident was hushed up.

Isn’t secrecy a corrosion that that facilitates only more secrecy?

Isn’t exposure the only protection afforded a public kept in the dark?

Records obtained by this Blogger, under Access to Information legislation, include emails and a Report by a structural engineer who investigated after the school children were in their seats for most of the day.

One email, dated 11:11 am. Monday September 22, 2014, (a second email was obtained and is attached to this Link) from the contractor to public servants and contractor personnel and to consultants, confirms remediation work on the second wall had not even begun by that time. QUOTE:

A DBA Consulting Engineers Ltd. Report to Department of Transportation and Works, dated October 20, 2014, states that a site visit by the structural engineer did not occur until the “afternoon of September 22, 2014”.

Equally disturbing are other aspects of the Report which confirm the observations of the Contractor’s Report.  But the Structural Engineer adds:

“At the time of the collapse the wall stood approximately two storeys high without any lateral support. It is also noted that another portion of block wall, located on Line Y5 between Lines X15 and X25, was partially constructed, similar to the wall that collapsed, but did not experience the same outcome.

During our visit, preceding the collapse, several structural deficiencies were identified in the wall that collapsed. These deficiencies, however, were not the direct cause of the collapse. The wall collapse occurred because it was not adequately braced at the time of the wind event. The contractor did not provide sufficient bracing to stabilize the wall, during construction, and as a result the high wind speeds caused the wall to become unstable and topple over.”

Then the Engineer describes the specific deficiencies in the wall prior to the collapse:

Photographs of the rubble easily confirm the Engineer’s assessment. The wall was not tied in to the main structure at any location: the roof, foundation, floor beams or columns.

It was an accident waiting to happen.

A windy day accommodated the event; luckily, it did not occur when a worker (or a child) was walking (or playing) in the area.

When have fences ever kept kids out? What if it had not collapsed that day, but some other?

Was the second wall removed so that the original engineering specification was strictly adhered to or was it merely “fixed” with bracing? It is too late to properly tie the wall to the foundation once it is erected.

If something so basic, yet so important, fails the scrutiny of inspection, should we not ask what else might have been overlooked on that construction site?
This Blogger has learned that the scene of the collapsed wall quickly disappeared from view; the cinder block rubble cleaned up and disposed of. One photograph shows the excavator removing the rubble at 9:10 am. that Monday morning. The photographs, at least to an experienced eye, also expose the essential missing parts of a sound and safe concrete cinder block structure.

Undoubtedly, the workers were at greatest risk.  A collapse of that size could have endangered a good many lives.

But what if children had been playing in the area when the construction site was unattended?

What if it had occurred at a different time than on a Sunday afternoon?  It was windy that Monday, too.

Those questions are certainly relevant, but that the school children were actually permitted onto the site and into their classrooms, in the absence of a thorough inspection by qualified people, has no hypothetical underpinning. It is a fact. It happened.

Either someone refused to make a decision to close the school and announce publicly the reason, else someone authorized the school’s opening and kept the matter secret.

Either case constitutes an unimaginable lapse of judgement; in fact, several lapses occurred if disclosure and transparency are matters on which you place a value.

It would be unthinkable that teachers and other staff would have known and chose to place their charges at risk rather than sound the alarm.

Most likely, the decision was made at a more senior level.

There is much about this incident we need to uncover. The public should demand answers to a plethora of questions. I will cite the ones already noted and add several more:

We need to know why government inspectors failed to immediately place a stop work order on the Contractor pending a full investigation of the incident and a full appraisal of the Company’s work.

Why weren’t walls (other than the two noted) examined, by a structural engineer, for possible sub-standard workmanship prior to the school opening on Monday morning, September 22, 2014?

Have they been properly examined since?

Was the temporary "fix" allowed to stand or was that wall demolished and replaced with one that met the standard originally specified?

That said, why wasn’t the school closed, at least until the structural engineer had performed an investigation of the incident and provided written confirmation that the Building was safe to enter?

Why was no public notice issued?

Why were the parents not notified?

Who besides the Contractor, the provincial Department of Transportation and Works, knew about the collapse of the wall and when?

When were officials of the Department of Education informed of the incident? Why did they not act, immediately, to close the school?

When were officials of the Eastern School District informed of the incident?
Why did they not act to close the school?

Was the collapse of a 25 foot by 50 foot cinder block wall and the possibility of other wall failures thought to be significant enough only to be worthy of a cloak of security?

What official(s) made that judgement, that decision?

Or, as seems to be the case, was there a cover–up at Roncalli School involving more than one senior official and more than one Government Department?

The people involved have had nearly a year to reflect on their decisions.

The public deserves answers to all those questions, now!


Or, will we be required to conduct further inquiries via the new Access to Information Act until the truth is ferreted out? 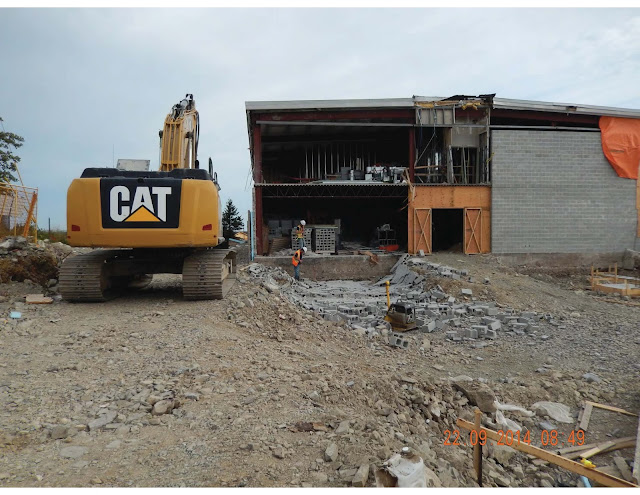 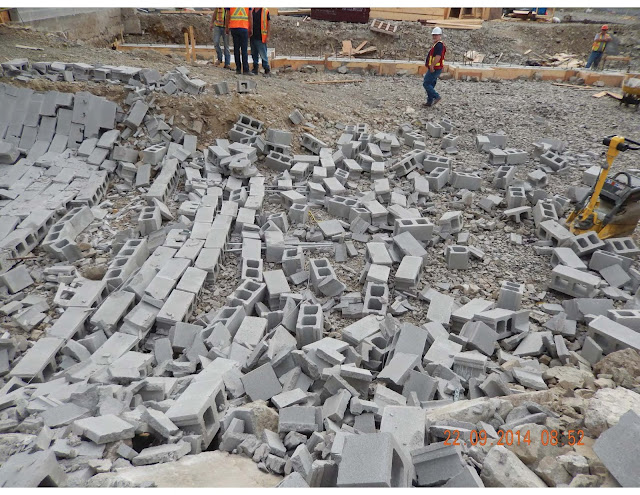 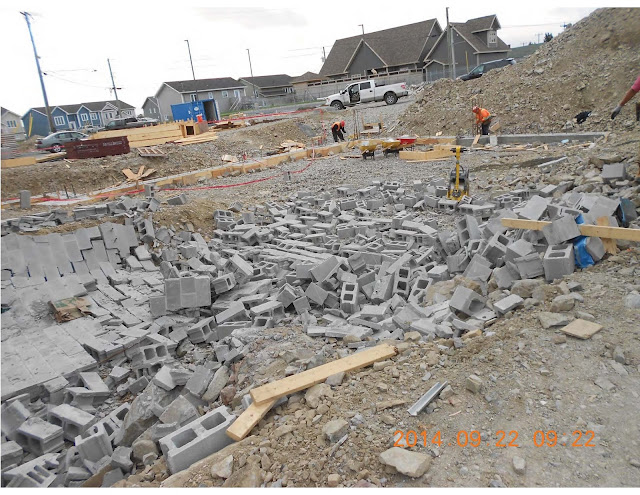 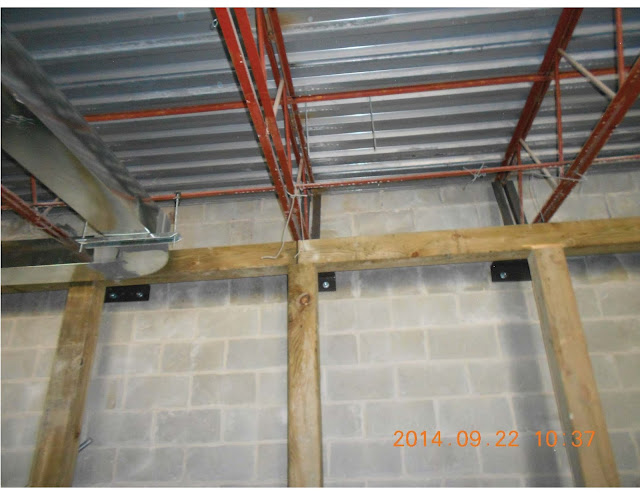