$11.4 BILLION. DON’T DISCARD YOUR CALCULATORS YET

Nalcor CEO Stan Marshall has finally provided the update on the Muskrat Falls project that Ed Martin wouldn’t or couldn’t. He reset the schedule, estimated project costs at $11.4 billion, and advised that we should get ready for electricity rates of 21.4 cents per KWh, roughly double what they are now.

$11.4 billion and 21.4 cents are frightening numbers. They must be laid against a deficit exceeding $2 billion annually, declining GDP, and the reality that we are already paying some of the highest taxes in Canada — all of which is made worse by a shrinking population.

I don’t know if the public really understands the threat the province faces, or if they derive any comfort from a weak Premier stating that he won’t let the province go bankrupt. I hope the public and Premier Ball understand that words, alone, won’t solve this crisis.

Worrisome, too, is that we have heard little more from Stan Marshall than his disturbing arithmetic.

Marshall has changed the tone around the Muskrat issue. He even concurred with the view that Muskrat Falls is a “boondoggle”. To some it is just a silly word. But no one should laugh.

On June 18, 2016, I received an e-mail from Jim Gordon, P. Eng. (Retired) attached to which was a CBC News item entitled “Nalcor investigates inconsistent patterns on Muskrat Falls transmission lines". Gordon, who has frequently commented on aspects of the Muskrat Falls project on the Uncle Gnarley Blog, asked what I thought of the issue. My comments are as follows. 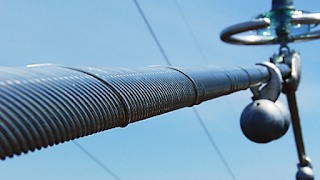 From the pictures included in the CBC News item it is apparent the outer strands of the line were squeezed too close together, causing one strand to “pop out” by an amount which is about half the strand diameter as shown in the photo.  (Source: CBC)

Transmission line conductors are formed by wrapping aluminum wire strands around a central wire as illustrated in the image below. (Source: internet). Layers of strands are added, with the wrap direction alternating to avoid line coiling, until the desired thickness is attained.
Read more »
Posted by Des Sullivan at Monday, June 27, 2016

MUSKRAT FALLS: A FAILED PROJECT BEFORE IT STARTED (and nothing has changed)

I recently had a look online simply using the search criterion, "Muskrat Falls". A NL Govt. website ‎featuring the 'Muskrat Falls Oversight Committee' showed up so I decided to have a look at what this "Oversight Committee" does. I didn't have to look hard to realize that the word 'Oversight' in the name was at best a misnomer.

Amongst other things, the web page states the following: "Chaired by the Clerk of the Executive Council, the committee comprises senior officials from Executive Council and the Departments of Finance, Natural Resources and Justice. It is supported by a working group representing expertise in the areas of law, engineering, project management, accounting and auditing.‎"

‎This sounds like a good beginning for such a Govt. Oversight Committee; the right types of people for undertaking vital governance practices for a mega-project are identified. Apparently, however, the good beginning didn’t get any further than this.

MEMORIAL UNIVERSITY OVERDUE FOR AN OVERHAUL

A full review of our health and education systems, in light of the Province’s fiscal challenges, is an absolute necessity. Those areas of expenditure, aside from reducing the size of the public service, constitute the greatest opportunities to reduce government spending. A review should focus upon the affordability of these services rather than our wants and needs. Otherwise, the growing public debt will require more profound measures to address the problem of excessive public spending.

This commentary will chiefly address spending on Memorial University although there is room for savings in K-12 education. The number of teachers has remained constant at about 5,600 since 1965 even while the enrolment in public schools has dropped from 144,000 to about 66,000 students.

The adjournment of the House of Assembly and the inquiry by the AG into the Nalcor CEO’s retirement benefits should be a springboard for pro-active, revitalized initiatives to chart a new course and to reverse the damage arising from a reactive governance strategy.

When the resignation of the Nalcor CEO was announced on April 20, 2016, I wrote to Nalcor, under ATIPPA, to secure a copy of his severance arrangements and his employment contract. I received this information on May 19, 2016. Since then I have submitted nine other access to information requests on this matter, relating to the payment of over $6 million to the retiring CEO. The most recent reads as follows:

Please provide a list of Nalcor employees covered by employment contracts with severance arrangements modelled on, or similar to, those contained in the contract with former CEO Ed Martin.

THE REAL TRAGEDY OF THE BALL GOVERNMENT

Public anger over the Premier’s handling of the severance issue endures. Yet, it is the perversity of watching the Tory Opposition, engaging in filibuster as it dances on Dwight Ball’s political grave, that gives dimension to the Liberals’ ineptitude. In a world of slightly more skilful people, Ball should be making Davis squirm—the Tories having created our fiscal nightmare.

There is always a cost when the Government is thrown into disarray and the Premier is cannon fodder for dissent. That price is a worry, one distinct from the singular question of the Premier’s integrity.

As always, there are the political issues—e.g. how could he have been so naïve? But others that are more fundamental relate to the budgetary mess, and to a plethora of overdue policy changes needed to transform the processes of government. Chief among them are initiatives to at least slow economic decline as megaprojects wind down.
Read more »
Posted by Des Sullivan at Thursday, June 09, 2016

TIME TO TAKE CONTROL OF NALCOR

The new government of Premier Ball ran on a reform platform of “openness, transparency and accountability”. It is time for them to show strong and decisive leadership and assert immediate control over all aspects of energy policy, including Nalcor and Muskrat Falls. By failing to do so, they have fallen into a quicksand which is not of their making. The sordid severance mess was also the creation of previous governments.

At the center of the mire is Nalcor Energy, a crown corporation which has become a law onto itself and which is building the Muskrat Falls project, behind schedule and over budget. The new government should be questioning the very existence of Nalcor rather than being held in thrall by it.

Termination of the CEO
Instead of responding to Ed Martin’s request for a meeting in mid-April the government should instead, and much earlier, have called him in and dismissed him “with cause”, not “without cause” as the Board of Nalcor is reported to have done.

TIME TO REFLECT ON THE SEVERANCE ISSUE: WHOSE FAULT IS IT REALLY?

In the media frenzy over how Premier Dwight Ball handled Ed Martin’s $1.4 million severance, the spotlight on the real culprits seems to have been switched off.

It is obvious that Ball and his Natural Resources Minister have become embroiled in a web of untruths to extricate themselves from the political fallout of the debacle.

But in the race to parse who said what, to whom and when, the public and the media have forgotten, that beneath all the lies and half-truths, is the realty that Ed Martin used the Crown Corporation he led, helped by compliant friends on the Board of Directors, to enrich himself.

While a more savvy Premier would have dealt with the issue - and Ed Martin - differently it was, nevertheless, the responsibility of the Board, too, to protect the public interest.

But nowhere in the confused and often sorry narrative of a failed CEO, an amateur Premier and his featherweight Minister, is there a single shred of evidence that the Board did anything except facilitate a scandalous ransacking of the public purse as it headed out of Dodge.