THE HARD TRUTH ABOUT THE VALUE OF THE MUSKRAT FALLS PROJECT

PlanetNL36: A Market Value Estimate of the Muskrat Falls Project

Have you wondered what the $13.1B Muskrat Falls project would be worth if it were treated as a business that had to fairly compete on the wholesale energy market?  Was it even worth the original cost estimate of $7.4B indicated by Nalcor at the time of sanction?

This post uses a simple economic analysis method useful for determining the fair market value of most any business or to determine if a project concept may be viable.  The accuracy of the method mainly relies on inputting honest numbers.

This is the analysis Nalcor would not do and still refuses to acknowledge.  You will see why.

Step 1 – Establish the Fair Price of the Product

Electrical energy is a widely traded commodity of known worth.  There is plenty of market data from other jurisdictions and within Nalcor itself that the typical wholesale price of electricity is 4 cents/KWh.

Nalcor Energy Marketing has been getting about that price for surplus Churchill Falls power for the past several years.  It is that same market price Emera will pay to Nalcor (under the Energy Access Agreement) for energy over and above the 1.0 TWh block of zero-cost energy they were granted in exchange for their constructing the $1.58B Maritime Link.

The chart below is published by ISO-NE, the organization governing the New England electricity market.  The chart shows that from 2008 to 2019, market prices have been trending lower.  Advancements in the shale gas industry pushed wholesale electricity prices permanently downward after 2008 to about $40/MWh USD (which is the same as 4 c/KWh; at that time the Canadian dollar was at par).  Since 2016, the price is closer to 3 c/KWh USD (4 c/KWh CDN) as wind power has come to dominate the market and set the price.  Further reduction in average price is probable as more wind and solar capacity enter US markets: NE-ISO capacity auctions out to 2025 (not shown) have declined to record lows, providing evidence that over the next few years, the market price of energy is more than likely to decrease as well. 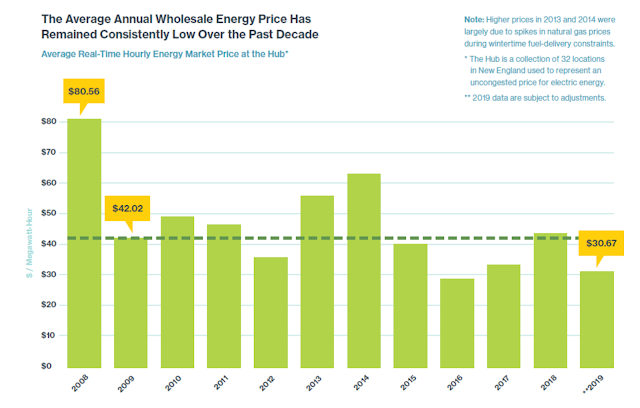 Below is data included in the 2020 Nalcor Virtual Annual Meeting slideshow on June 10.  It appears Nalcor Energy Marketing is consistently underachieving on getting the market price.  In another slide (not shown) for Q1/2021, they are indicating 4.1 c/KWh was achieved.

The 4 c/KWh assumption is reasonable but there is evidence of downside risk. 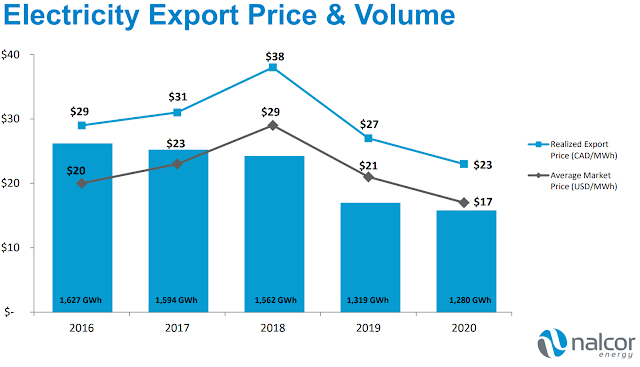 The Muskrat project is estimated to have 4.6 TWh of maximum energy available from the Soldiers Pond terminal station.  At 4 c/KWh, the potential annual market revenue would be $184M.   However, as Muskrat is handicapped by the 35-year agreement to supply Emera with 1.0 TWh of energy at zero charge, the expected revenue in this exercise is $144M.

All direct cost of goods sold must then be deducted from the revenue.  The big charge here is operations and maintenance, presently estimated by Nalcor to be about $80M.  Muskrat is also encumbered by provincial waterpower royalties estimated at $16M and Innu Benefit payments of $6M until 2050, a commitment that escalates to about $60M after 30 years.  As the higher Innu benefits kick in at about the same time as the free energy period to Emera is set to expire, the two can be considered to offset each other.  Subtracting the subtotal of $102M in operating expenses yields net annual cash flow of $42M.

There are three major risks that could seriously impact the net cash flow projection.  First is wholesale market price erosion as covered in the previous section.  Another is higher O&M costs as Nalcor once estimated that cost to be over 30% higher – confidence in the current estimate may be shaky.  The last is system reliability as even minor repairs on such a costly large-scale project, could cost tens of millions while serious events would wipe out many years of net cash flow.  Besides the cost of unanticipated repairs, failure to deliver energy during outages would also impact sales revenue.

Step 3 – Establish the Required Rate of Return and Depreciation Rate

Rate of return includes consideration of debt, equity and risk all rolled into one number.  In 2012, during the Muskrat review at the Public Utilities Board, Nalcor planned for 8% return and that figure will be used in this analysis.

Crown corporations put little value on risk as they can always turn to their government shareholder to provide more cash when troubles arise.  The Federal Loan Guarantee lowered the debt cost and the current overall rate of return target at the utility is well below 6% as bond rates have fallen in recent years.

By comparison, private businesses demand higher return levels to compensate for risk.  Suncor targets 9% in its offshore holdings and Equinor, in recently discussing the Bay du Nord project, stated it will only pursue projects capable of at least 20% return.

While 8% is a bit high for utilities these days, Muskrat’s risk profile warrants at least that bit extra.

Depreciation is the gradual loss of asset value and is accounted for as a current cost.  It allows the equivalent of a rental cost to be added to operations cost.  Nalcor is using the 50-year term typical for hydro projects resulting in an annual depreciation charge of 2% of total capital cost.

Below is a very simple finance formula found at the core of many economic assessments.  Far more sophisticated cash flow and valuation models can be developed but this simple formula will be very close to the most elaborate models:

Based on the estimated $42M gross annual profit, divided by 10%, the market-based Muskrat Falls project Capital Asset Value is estimated to be $420M.  That is barely 3% of Muskrat’s projected final capital cost.

Before settling on that number, however, consider again the key assumptions for high operating reliability, no downtime, zero unforeseen major repairs, and zero error on O&M costs.  Only if the project performs flawlessly on all counts for 50 years is $420M valid.

Based on the project’s track record to date, especially in the Labrador Island Link (LIL) transmission line upon which so much depends, this is implausible.  To date the DC convertors, synchronous condensers, control systems and software, a substantial subsea grounding location, and extensive spans of towers and conductors have all experienced major difficulties.  The generating plant seems quite a bit better, but it remains early days – the stability of the quick clays known to exist within the North Spur should not be forgotten though.

Few of those issues are realistically going away soon and for good.  50 years of trouble-free service is highly unlikely. The risk of costly troubles wiping out net earnings is high.

The simple formula presented above can be used to demonstrate the magnitude of Muskrat folly in other ways.  It is routinely at the core of pre-construction viability estimates.

For example, you want to know how much annual revenue is needed to sustainably cover the probable $13.1B capital cost?  Just multiply it by 10% and add the $102M in operating costs.  The answer is $1.4B, 10 times the expected revenue.

What must the price of energy be forced up to for $1.4B?  Dividing that by the 3.6 TWh of saleable energy yields an average price of 39 c/KWh, 10 times what the wholesale market is paying today.  It is also 10 times that of the four consecutive years prior to project sanction.  Clearly, whichever way you run the numbers; the project was not viable using fair-market prices.

That high average unit price of 39 c/KWh is misleadingly low where ratepayers are concerned as they only need about 1.2 TWh of energy at most.  2.4 TWh of revenue-generating energy will be exported at prevailing market prices of around 4c/KWh yielding just under $100M in revenue.  This leaves NL Hydro to pay the balance due of $1.3B, or about $1.10/KWh to bring the project to break even and satisfy all capital return requirements.  That is about 6 times the cost of operating Holyrood, the plant Nalcor deemed too costly to sustain.

For Nalcor’s $7.4B sanction estimate in late 2012, the required revenue calculation is $840M.  The average wholesale price for breakeven must be 23 c/KWh.  The cost allocated to NL Hydro computes to an energy price around 50 c/KWh, triple the cost of Holyrood.  A finding of complete non-viability was a certainty.  If only this type of straightforward analysis had been employed at the time.

Even when considering the benefit of the Federal Loan Guarantee decreasing borrowing costs and if the required rate of return were 2% lower, the most any of these numbers improve by is 25%.  That benefit is easily offset by the risk of realized market energy prices decreasing to 3 c/KWh which happens to be what Nalcor has already been averaging in the last 5 years.  Carbon credits, excluded from discussion for simplicity, likewise barely move the needle (and are actually irrelevant as they would have been earned equally by any solution that would have eliminated the Holyrood plant).

All analysis above excludes the important issue that the Island, even if Muskrat were to prove itself quite reliable, still needs a backup power plant on the Avalon.  While Nalcor originally denied this scenario, we now know that NL Hydro has gone before the PUB stating that serious reliability risk exists without a backup power plant.

The top solutions are to recondition and continue operation of the Holyrood plant with reduced fuel expenses or outright replace it with standby combustion turbines.  Either is likely to demand anywhere from $60-100M additional required revenue.  This must be regarded as a missed project cost: Muskrat as a business unit needs the backup plant to compensate for its inherent deficiency and the backup plant is not a cash generating business unit itself.

The tenuous forecast of $42M in net cash flow is directly impacted when this directly related cost is added in.  Substantial net losses on operations from the project are assured.

On the balance of probabilities, competent project finance professionals would have found in 2012 and would again find in 2021 that consistent positive cashflows coming from the Muskrat Falls project were unlikely.  They could only logically estimate the appropriate capital asset value as zero.

Despite having built it, given the serious risk of recurring operating losses and of high loss events, professional advice would likely also recommend against putting the project into operation to avoid further financial loss.

Even at the seeming end of the project, and even if the entire capital cost is considered a sunk cost, a careful analysis of better alternatives ought to be considered.  With high reliability risk and capital costs yet to be incurred for backup power, the door is not yet closed to considering mothballing Muskrat and implementing more efficient alternatives.  The LIL risk especially, may be so great that the door could always be wide open.