On the same day as PlanetNL34 was posted on the Uncle Gnarley blog, some pertinent information was discovered while researching for future postings.  The query into Government inaction on the Labrador Industrial Rates Policy (LIRP) is no longer a mystery: It was indeed implemented.

An evidentiary trail of breadcrumbs led to finally finding the LIRP revenue stream in an unexpected place.  This means some key errors were made in PlanetNL34 that will be corrected and clarified here.  At the same time, Government is by no means absolved as they substantially failed to capitalize on the opportunity, and they appear to have committed to the deed until 2041.

From Nalcor’s Financial Statements for Churchill Falls Labrador Corporation (CFLCo), this statement is seen every year from 2015 onward in the Revenue Recognition section:

The second sentence represents the Twin Falls (or Twinco) block of power.  Since the expiry of the Twinco power supply arrangement on Dec.31, 2014, NL Hydro has assumed control to deliver the power.  This is as may be expected, given that NL Hydro is the sole distributor of power on the Labrador Interconnected System.  It was assumed that since January 1, 2015, NL Hydro has been purchasing energy at the current rate of 0.2 c/KWh from CFLCo and that if there were substantial new revenues coming in they would show up on the Financial Statements of NL Hydro.  This was not correct.

In the NL Hydro documents filed with the Public Utilities Board there was an assumption that energy sales were being recovered in the revenues shown in those documents, amounting to a rate of approximately 0.3 c/KWh.  This was not correct.  The PUB is limited to overseeing transmission costs only.

In the 2012 Press Release issued on behalf of the Minister of Natural Resources, describing plans to implement a new LIRP, the language used is suggestive of a matter that is in the exclusive domain of the Province and their wholly owned energy companies.  This was misleading and the assumption that NL Hydro would record the revenue was incorrect.

A comprehensive Electricity System consultant report was issued October 26, 2015 to the Department of Natural Resources.  While checking it for other reasons, the key text section below was found regarding the new LIRP: 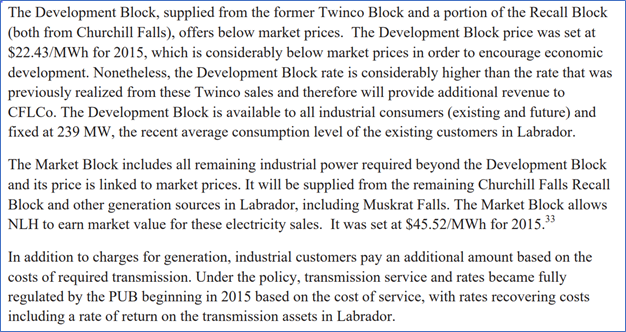 From the text, it clearly appears that the new LIRP was in effect at this time and there should be significant new cash flow showing up somewhere.  While easy to miss, the key words “will provide additional revenue to CFLCo” are there.  That distinction was absent from Government’s 2012 Press Release.  As is often the case, it is the words Government does not use that may best explain the issue at hand.

It appears then that while Hydro has been assigned responsibility to distribute the power of the former Twinco Block, they have zero right to earn money from those energy sales.  The sales revenue is a complete passthrough to CFLCo.  NL Hydro collects only the miniscule fees for cost-recovery of transmission services.

A brief statement in the 2015 CFLCo Financial Statements, under Commitments and Contingencies, indicates that a new PPA was put in place for nearly 27 years, set to expire simultaneous to Hydro-Quebec’s supply contract with CFLCo.

Government did appear to have full control of the rate design and as 65.8% owner of CFLCo, it ought to have been wise for Government to maximize the profit opportunity.  65.8% of the net earnings could potentially get paid out to Government as Dividends.  The incentive to maximize revenue is clearly present.

Yet, Government chose to cut the mining companies a big break and forgo maximization of utility earnings.  Government just does not understand the fundamental economic concept of Opportunity Cost – a very important concept that will be repeated in future posts.

The notion of selling power to IOC, the only company on the LIRP in 2015 when the terms were finalized, a highly profitable company that has been there for over 50 years, at a half-price discount under the guise of “economic development” just does not make any sense either.

In the 2015 CFLCo Financial Statements, revenues from Hydro dramatically increase by $37M (from $6M in 2014), while $0.6M in 2014 Twin Falls revenues disappears altogether.  While the notes to the statements could be considerably more forthcoming about these important revenue changes, it now appears clear that the new LIRP is the only explanation for the $37M revenue increase.

The revenue varies slightly in the subsequent years but is not up as significantly as might be expected with the addition of load from Tacora Resources.  This is likely a result of the fact that market prices have slipped over this period.

The PPA between CFLCo and NL Hydro cannot be found to be examined.  The extent to which it fails to capitalize on maximizing earnings is unsettling.  Could changes be made anytime before expiry in 2041 to address the lost opportunity?

Annual revenue collected through the LIRP since 2015 appears to be about $45M less than it would if calculated at wholesale market prices.  Over nearly 27 years this is an Opportunity Cost of $1.2B (in present day valuation).  The potential lost Dividends to Government total $800M.

How is it that Government saw fit to institute a below market discount for the mining companies, principally IOC, that ensures they earn an additional $1B in profit until 2041?

Is there any flexibility for Government to adjust the rate and remove the discounted rate scheme or is it locked in to 2041?

What does this indicate about the opportunity to implement a profitable pricing regime in the next supply agreement beginning in 2041?   While the existing iron ore mines’ Twinco rights to supply may be expected to survive beyond 2041, is there any clause within that precludes the utilities from maximizing their revenue opportunities?

Did Government simply hand a discount to IOC in 2015 out of weak negotiating strategy or was executive direction from Cabinet responsible for the outcome that may have been at odds with the advice of Government staff?

The loss of $800M should always be a matter deserving of serious inquiry.