Isolation an advantage
In the past our isolation has been perceived as a disadvantage. This is no longer the case, when it comes to the pandemic. As we face this most serious threat to our safety and security we are able to turn our isolation into an advantage. We can be “masters of our fate”. It is not too late but we could and should have acted sooner. We can and must get it right. It is a matter of survival.

The coronavirus is the biggest threat to our province and its people today. The Director of the US Centres for Disease Control and Prevention (CDC), Dr. Robert Redfield, recently said the US would experience a second wave in the fall.  We, in this province, should be able to keep it at bay and avoid a second wave. Fortunately, it is something over which we can exercise some control but only if the public is fully engaged, both individually and collectively, through our provincial government.

Email ThisBlogThis!Share to TwitterShare to FacebookShare to Pinterest
Labels: controlling COVID-19 in Newfoundland and Labrador, COVID-19

Email ThisBlogThis!Share to TwitterShare to FacebookShare to Pinterest
Labels: COVID-19

MOURNING THE PASSING OF JIM LEARNING 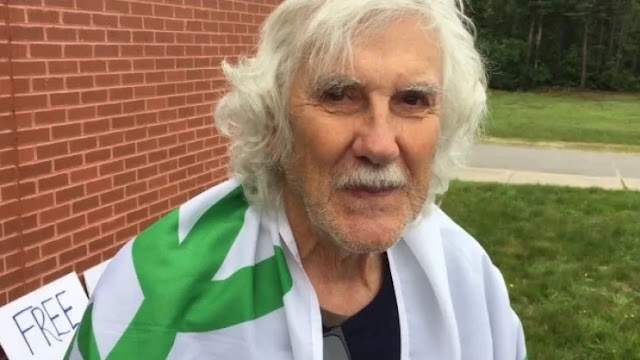 All associated with the Uncle Gnarley Blog wish to join in expressing sincere condolences to the family of Jim Learning, especially his partner, Roberta Frampton Bonafiel.

What can be said except that he brightened the spirits of those whom he met with his laughter and optimism as he contributed to his community and his province, honored his native heritage and traditions, stood up for  the principles in which he believed and passionately defended the preservation of the environment. This he did, not maliciously, but peacefully - employing his democratic rights. And those rights were ones that he was always prepared to defend, even at the expense of his liberty.

What more could any Labradorian or Newfoundlander expect from a native son!

The world is run by egoed fools
That let covirus spread
In planes and boats, around the globe.
For cash, they cancelled dread.

But dread it is, and many dead -
More corpses on way.
For fools, that flaunt reality
All days are all-fools day.

COVID-19: WE STILL DON'T HAVE A PLAN. TELL POLITICIANS THAT TESTING IS THE BEST ONE AVAILABLE.

We should be concerned that the politicians - the one-string violins preaching social distancing - are far too caught up in the daily afternoon “War by Video Conference”. They are not making any real decisions to control COVID-19 spread or how to return the province’s economy to life as fast as possible, without precipitating another outbreak. They are awaiting instructions from Ottawa.

Having emptied the public Treasury these past five years, why would we think that they possess the skills necessary to manage a pandemic, anyway?

Let’s get serious. The afternoon “Video Conference” is nothing more than chatter; it is as predictable as the afternoon Soaps. When you have heard all the admonishments over “social distancing”, what have you learned except that they will return for more of the same the next day?  We hear it all from the PM anyway.

We need a Plan, and we don’t yet have one. This article will suggest one.

EDITOR'S NOTE: The author of today's article is the whistleblower, dubbed the "Anonymous Engineer", who first disclosed falsification of the estimates for the Muskrat Falls project in January, 2017.
…………………………………………………...

The Muskrat Falls Inquiry had a very interesting beginning, which may have been forgotten by now. When the costs of the project started going off the rails, the public outcry for an inquiry began to get louder and louder.  The timing was about mid 2017. The demand for an inquiry was strongly resisted by the leadership at the time, Premier Ball, Minister Coady, and Stan Marshall the CEO (Chief Executive Officer) of Nalcor. The public pressure for that response was too strong to resist. The leadership capitulated and initiated an Inquiry. Time line about mid 2018.

The Apocalypse is Coming

Two weeks ago I wrote a guest blog, Avoiding the Apocalypse, in which I noted that at every step of the way our public health response has been slow and that as a result, we may well have squandered the advantage we have as a result of our geography. As the song goes, with respect to the island of Newfoundland, “thank God we’re surrounded by water.” And, of course Labrador is also very remote from the rest of the continent.

In addition, I pointed out that our isolation meant that we were going to be one of the last jurisdictions to have cases. This result is that we had the advantage of learning from the experiences in other places and could act accordingly.

We have missed that opportunity and, as a result, we are into the pandemic big time. More cases than New Brunswick.

BROKEN TREASURY ADDED TO THE LEGEND OF DANNY

Premier Ball’s March 20, 2020 letter to the Prime Minister was clear: Newfoundland and Labrador had "run out of time". No one, except the Government of Canada, could be found to buy the bonds of a bunch of drunken sailors.

By mid-April the Provincial Government would not have had sufficient cash to meet its payroll or send cheques to the plethora of people, businesses, and organizations who rely upon them to pay their bills, unless the Governor of the Bank of Canada intervened.

The debacle of insolvency now greets all the people of the province at the worst possible time - during a health pandemic and a global economic crisis. I suspect that no one needs to hear the historical parallels – economic or political – with the 1930s. I will save you the imposition.