FINANCE MINISTER SHOULD LET EVERYONE SHARE IN THE GOOD NEWS

VOCM, in a year-end news story, quotes Finance Minister Tom Osborne saying that “the province has made some significant progress in the last three years in knocking down the deficit.” The Minister asserts that “in each of the last 3 years they’ve eliminated $2-billion from the deficit.”

Perhaps such comments should be dismissed as election fever builds and the propaganda machine is stoked. However, I do remember the Premier stating his commitment to transparency, and it is in that spirit I’m hoping the Minister will release details of his quite fantastical assertion.

Could he also inform us why killing the deficit had to be such a painless exercise? How will we ever learn not to repeat the last decade of fiscal irresponsibility if correcting financial recklessness is done so easily?!?

Of course, I am being facetious.

The simple truth is that the deficit was not tackled in one year of the Ball Government, let alone in three.  If proof were needed, readers need only refer to the Auditor General’s Report for the 2017-18 fiscal year, released just last month.

The AG’s Report contains an Exhibit (p. 24) of the Government’s record of operating revenues and expenditures. While it incorporates a ten-year period from 2008 to 2018, the three Budget periods of the Ball Administration — beginning in 2016 — are easily identified. The Exhibit consistently shows a roughly $1-2 billion difference in expenditures over revenues. If the Minister is right, one of the lines in the Exhibit would have to vastly diverge. 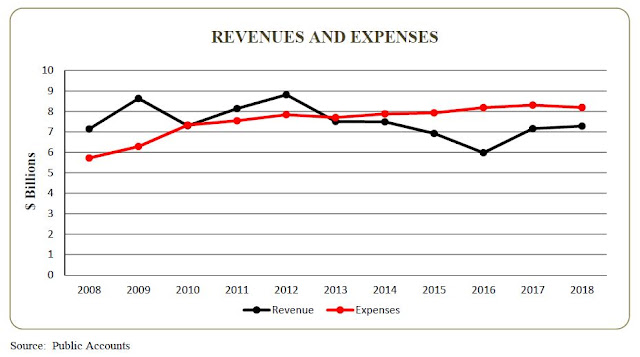 Only the black line, showing the revenue stream, in 2015-16 actually shows significant deviation and then in the wrong direction. In that year provincial revenues took a $1 billion dive as a result of lower royalties and lower oil production. The expenditure column wasn’t given notice that it needed to take a hit too, the Liberals unprepared to take any real deficit decisions except to replace the revenue lost with higher taxes.

Next, look at the red line showing annual expenditures over the period. The AG’s Exhibit certainly proves that the Tories had no spending discipline and were, in fact, reckless. The Liberals at least kept spending below the rate of inflation, but otherwise did not seriously tackle was the problem of overspending. Otherwise, they rode on the rebound in oil prices — which accounted for the good news contained in the November Update, often referred to here as the “Wiseman Plan”, which was based on hope. 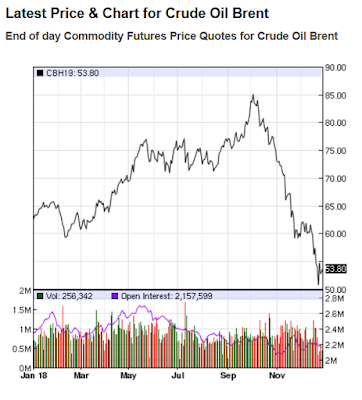 In the Fall Fiscal and Economic Update (2018-19) the Minister informed us that the deficit has fallen to $547 million. Even if that number was a complete representation of the actual figure, it would hardly be a badge of honour. It's just that, in this small province, we have gotten used to slinging around zeros with abandon.

We didn't hear the Minister express concern about the collapse in oil prices this Fall or the Budgetary impact of idled platforms as a result of the severe November storm. Then there is the prolonged shutdown of the Husky Sea Rose. These incidents are not imaginary; neither is the fiscal fallout.

As to the Minister’s claim of deficit cutting, possibly he is referring to the drop in the equity requirement — all borrowed money — for the Muskrat Falls project. But those numbers have never made it into any accounting of the Government’s annual deficit numbers. Similarly, Capital Account expenditures (infrastructure) don’t either.

Provincial Governments — Liberal and Tory — have always applied a self-serving metric to what constitutes “deficit”. The figures announced in any Budget address leave out a host of liabilities that are not even fully accounted for in the Total Debt figures.

Has the Net Debt of the province (liabilities minus assets) come down bearing in mind that it includes the equity for the Muskrat Falls project?

The Auditor General reported a March 31, 2016 Net Debt of $12.7B, noting that the figure “was an increase of $2.3B from the previous year and the highest level in the Province's history.” The implied message ought to have triggered some serious decisions by the Ball Administration, but all the energy had gone into saving $1 million on the closure of public libraries (later reversed). In short, the Liberals had chosen the line of least resistance. They had become drunken sailors, too. More recent AG Reports put the 2017 Net Debt at $13.6B and the 2018 figure at $14.7B.

Why are those numbers still rising if the Minister has slayed the deficit to the tune of $2B annually over the last three years?

Should I be euphoric or depressed? Giddy might work if you are selling cannabis. But on budgetary matters, I’ll take just the facts please.

No discussion of debt/deficit can be carried out without reference to the Total Debt. Besides, it might help us in our search for the Minister's reported savings.

But even this figure is not actually the Total Public Sector Debt. Item #1 of the Notes to Appendix III of the Budget Estimates (Newfoundland and Labrador Public Sector Debt 2014-2018) serves this warning: “The total public sector debt does not include payables and accruals, or unfunded liabilities related to pensions, severance or post-retirement benefits.”

The unfunded pension liability, alone, is a pretty large figure left out of the Total Debt.

To be fair, this Budget’s style of construction long predates Tom Osborne’s appointment to the Finance portfolio. But he is the one now watching as the (real) debt numbers reported continue to grow.

The issue might be less important if the Province wasn’t in such a fiscal mess, if expenditure was seriously being knocked down, or if the deficit wasn't so reliant on the price of oil. But when Osborne could be giving clarity to a very serious problem, he is instead making unsupportable claims.

He could be issuing new rules affording greater transparency to the Public Accounts — including the inclusion of Capital Expenditures in the deficit figure — as is done by the Government of Canada.

Is Minister's Osborne's claim valid that “in each of the last 3 years [the Liberals have\ eliminated $2-billion from the deficit”?

Therefore, to start off the New Year, how can I not look forward to a statement from the Minister giving clarity to, and refuting, the Auditor General’s numbers?

And, anyway, why shouldn’t all the people of the province share in the good news?
Posted by Des Sullivan at Monday, January 07, 2019