EDITOR'S NOTE: The author of today's article is the whistleblower, dubbed the "Anonymous Engineer", who disclosed – on this Blog - falsification of the estimates for the Muskrat Falls project. That was January 30, 2017 . His comments were recorded in a post entitled Muskrat Cost Estimates "A Complete Falsification". A second post called Muskrat: Allegations of Phony Cost Estimates provided significant additional details of low-balling which ultimately were used to justify the Sanction of a project that has become a scourge on the Province's economy. His alarming assertions have been supported with revelations which emerged from Phase I of the Commission of Inquiry. This article attempts to shed light on an issue that is likely to be assessed during Phase II, often referred to as the Construction Phase. — Des Sullivan

It is almost two years to the month since I spoke with the host of the Uncle Gnarley Blog, Des Sullivan, and subsequently with Anthony Germain of the CBC Morning Show. At that time I revealed that  the estimates on which the Muskrat Falls project was approved were low balled and falsified. I am confident that those statements were heard at the political level and that they might have influenced the Government's decision to  commence the Inquiry which, of course, I have been monitoring.

After sixty two days of inquiry and sixty two witnesses I thought it might be useful to offer my observations of what has been disclosed so far. I am also keenly interested in Phase II, which will deal with post-Sanction issues, in particular the matter of the egregious cost overruns, which have been experienced on the project.

In this regard, it is my intention to offer readers  a mathematical analysis of the impact of construction labour productivity, on the project sanction estimate the low-balling of which, I believe,  added greatly to bringing  costs to their current level.
But, first, here are my initial observations of Phase I of the Inquiry's work:

1.      It is abundantly clear that Nalcor deliberately misguided and misled government departments and other organizations that had an “oversight” responsibility. These include as a minimum, the Ministry of Finance, Ministry of Natural Resources, Board of Directors of Nalcor, Joint Review Panel, the Public Utilities Board and MHI. Information that provided a strategic disadvantage to the project was rejected.

2.     Nalcor betrayed the trust placed in it by other Government Departments leading to a feeling of anger amongst the effected Government departments. These departments “swallowed whole” any and all information provided by Nalcor based on their implicit trust of Nalcor.

3.     Nalcor low balled the estimate to secure project approval, making contingencies inappropriately low and dropping “Strategic Risk.” The advice of industry renowned experts suggesting higher contingencies was ignored by Nalcor, who made every effort to restrict access to the base estimate and estimating data.

4.     The construction schedule was at level P1, or P3, that is the schedule was essentially unimplementable. A P75 schedule, most suited for a project of this magnitude and complexity, would have taken 21 months longer, together with the associated costs.

6.     Government officials moved from being in a “judging role” to being advocates for the project, completely losing their objectivity, becoming passive by standers.

7.     Phase I provided  no serious debate about productivity, which was essentially glossed over. Base upon my experience with the Project, I believe that the issue is a matter of paramount importance in arriving at the larger question of why such cost overruns occurred.

8.     The purpose of this write up, therefore,  is to assess issues around  construction productivity more fully and to consider  it’s impact on the “Base Estimate”.

The analysis of construction labour productivity is performed with information in the public domain, principally from  the Grant Thornton Report. 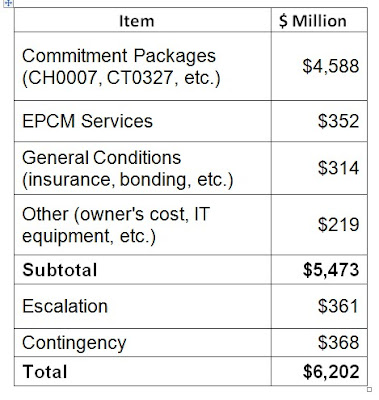 To anyone knowledgeable of Project Management and Estimating, it is immediately apparent that the ratios of numbers are completely incorrect. The numbers just don’t fit.

Each of the gaps will be discussed in turn.

The SNC Lavalin Senior Estimator, Paul Lemay stated in his testimony that there is a 20% allowance for productivity and a $ 300 million allowance in the estimate to cover productivity. This figure is nowhere near sufficient particularly when working with unionized labour agreements, as the following analysis will illustrate.

The Commitment Package Cost includes the labour, construction equipment, specialized equipment such as turbines, converter stations, switchyards, transmission lines and towers and material required to construct the project. As the project is labour intensive, project costs are enormously sensitive to labour productivity.

The 20% allowance carried in the base estimate is consumed by routine items such as morning work session - tool box talks, coffee breaks, washroom breaks, afternoon work session – self clean up prior to lunch , return to work stations, coffee breaks and washroom breaks, quitting time – clean work station and self clean up. These items are inherent in any construction project, even in condominium construction in Toronto, Montreal or Vancouver.

In the harsh construction environment of Labrador, there are location specific multi-variable productivity factors, unique to a northern Canadian climate, that must be considered, namely:

The impact of this productivity factor on the Commitment Package Cost of $ 4,588 million is assessed as follows: (All figures are in millions of dollars)

3.    General Conditions and Owners Cost
These are prorated in direct ratio of the original estimate.

4.    Sub-Total The subtotal is recalculated with the updated numbers.

5.    Escalation – Prorated according to the subtotal.

6.    Contingency – Prorated in the same ratio in the Grant Thornton report page  62, for a P75 probability of successful project implementation. Cost  $2,321

The updated table adjusted for labour productivity , EPCM and contingency is as follows: 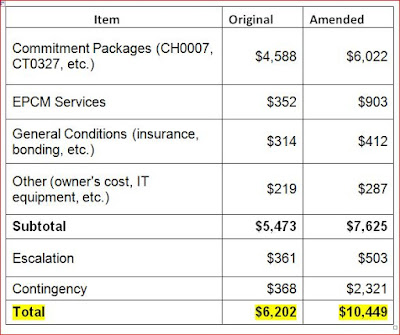 The impact of labour productivity and having the correct amounts for EPCM and contingency at P75 are clearly apparent. These push the estimate over the $10 billion mark. All this information and data was available in October of 2012, long before project sanction.. It was not in Nalcor’s interest to do so. Therefore, it was not done.

Seemingly, this is the reason why senior executives of Nalcor  did not want anyone, particularly competent consultants, getting close to the estimate as they could have easily worked this out.  With a $10 billion dollar price tag there would not have been a project.

A comprehensive review of the estimate was never done at a detailed level as it had no chance of approval. Nalcor strenuously opposed a “ deep dive” into the estimate, depriving consultants MHI, Validation Estimating and Westney Consultants access to the estimate except at a summary level.

Suggestion to the Commission of Inquiry
Finally, I have this suggestion: please have John Hollmann of Validation Estimating and or Richard Westney of Westney Consulting assess the impact of construction labour productivity. The results will be very revealing.

It will be equally  interesting for the Commission of Inquiry to compare the above referenced  estimate to the present forecast at completion.