To sanction the Muskrat Falls project, Nalcor relied on their development of a steadily growing electricity load forecast on the Island.  The assumptions used have proven so weak that in 2016 Nalcor decreased the total Island energy load forecast out to 2040 by 25%.  That’s a major error for any self-respecting utility to make.  By putting forward the 2016 revision, Nalcor has quietly admitted their prime reason for Muskrat sanction, needing a lot of power soon, was untrue.

This posting will challenge why the latest Nalcor load forecast still includes 10% net load growth leading up to 2040 instead of declining.  Does Nalcor believe this province has insatiable electricity demand at any price?  Do they remain shockingly ignorant of global trends and energy alternatives?   It appears their revised forecast was a significant step toward reality but not all the way there.  The analysis also begs the question, shouldn’t a proper pre-sanction load forecast have also pointed to declining power needs instead of increasing?

THE ROLE OF BIAS IN NALCOR’S DOWNFALL

Mr. Paul Humphries, the VP of System Operations and Planning at Newfoundland Hydro until his retirement two years ago, recently appeared as a Witness at the Muskrat Falls Inquiry. Humphries was one of the primary architects of the project, as he stated during the 2012 PUB hearings with this declaration:


“… I'm Paul Humphries, manager of system planning and ultimately the decision on the requirement to move forward and the alternative for the best alternative, and the determination of the cumulative present worth of those alternatives is the responsibility of my department.”


The Cumulative Present Worth (CPW), to which Mr. Humphries refers, is a methodology used to discount to present value, for comparison purposes, the Isolated Island and the Muskrat Falls options. Of course, the calculation is meaningless if the inputs used aren’t prepared rigorously. In such a case, the boosters of the preferred option always win.
Read more »
Posted by Des Sullivan at Monday, November 26, 2018 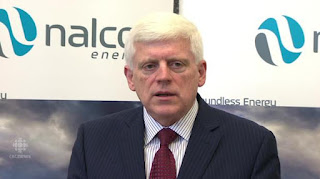 I have attempted below to examine the likelihood that Muskrat Falls will cover all of its costs. To make this assessment I have used the “revenue requirement” projections supplied by Nalcor in response to my ATIPPA request for each component of the project, along with the return on equity assumptions used by Nalcor. The return on equity (ROE) for generating assets is 8.4% and is built into the PPA for 50 years.
Read more »
Posted by Des Sullivan at Monday, November 12, 2018


In this post I examine the underpinnings of this “fundamental assumption”, beginning with the take-or-pay power purchase agreement (PPA), the role of equity and the concept of freedom of choice. Does the PPA lock us in to an abusive relationship, not for 65 years but for 50? Is it another Churchill Falls Agreement which strips us of our rights? In my next post I will ask if the PPA makes Muskrat Falls self-supporting and whether revenues from rates will cover all costs and generate dividends for the government of Newfoundland and Labrador (GNL).
Read more »
Posted by Des Sullivan at Thursday, November 08, 2018

THE SUPREME COURT AND THE LOSER

“Show me a good loser and I’ll show you a loser.”


The message from the hall-of-fame coach to his Green Bay Packers was unmistakable: equanimity should never be perceived as resignation or acceptance even when a loss is beyond your control. Lombardi might have added, for certainty as much as a warning: there’ll be a next time.
Dwight Ball is no Vince Lombardi. The weakling Premier, oblivious to the greatest financial crisis since the 1930s, has confirmed — again — that he does not have the stuff of leadership.
What did he say when the Supreme Court of Canada gave its 7-1 decision last Friday on reopening the Upper Churchill Contract? “The past is the past for us. The decision is the decision,” Ball told the media in a tone of resignation. He added: “It will not interfere with the working relationship we have with Quebec.”


When a kick in the balls for the first player giving the opposing team a compliment would have constituted Vince Lombardi’s sole command, for our leader the ink isn’t dry on the SCOC decision before he is playing supplicant to Quebec.

PlanetNL18: Big Windfalls to Come from Churchill Falls?
For decades, Newfoundland and Labrador (NL) Governments have recited the lost earnings potential of the Upper Churchill and bemoaned the billions earned by Hydro-Quebec (HQ).  They long for the day of August 31, 2041 when HQ’s locked-in low-price contract for 90% of CFLCo’s energy shall expire and most of the profit will flow into NL.

It’s the kind of linear-thinking politicians thrive on: if electricity prices remain constant, demand remains constant, and production costs remain constant, then the dream seems real.  A naïve Premier today may even be thinking of borrowing billions to mitigate Muskrat losses until 2041 because the mighty Upper Churchill will quickly pay it all back and more.
That would be a terrible gamble to take as already there are a number of economic threats to the viability of Churchill Falls power.