ENJOY THE REST FROM SNOW AND COLD, COUNSELS THE BARD 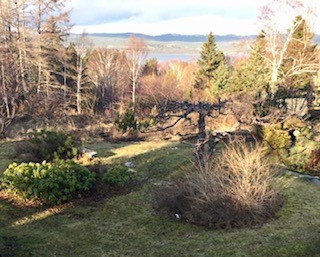 It’s Boxing Day, the lawns are green,
Snow’s all melted from the scene.
The forecast warm for most next week,
Could see New Year in weather meek!
May days in late December!
Sunny skies to long remember.
Is this the Global Warming??
That’s banished winter’s storming,
More likely, winter’s wrath will roar
Before the summer’s at our door -
Enjoy the rest from snow and cold -.
Bring on the ‘Warming’ to winter scold.

PLASTICS INSPIRE THE BARD'S "Humbug" SIDE

PREMIER MUST RESTORE CONFIDENCE IN OUR JUSTICE SYSTEM

The recent controversy about the interactions between the Chief of Police and the former Premier and present cabinet ministers brings to mind the aphorism quoted above, which comes from a decision arising from an apprehension of bias in the judicial setting, but has equally applicability to actions of the police.

Priorities have to be food and shelter,
Heat and health, not helter-skelter,
Not rushing around to party hard
Or relax in the sun on travel card.

Not dollars and cents, makes no sense -
Can’t eat construction, nor money immense
Though gives you the means to provide -
Those at food banks have nowhere to hide.

Donations to charity, won’t bring parity
Or provide for a future fixed with clarity.
Government funds to feed the skint
Needs be provided to prolong life’s stint.

THE TIMING OF THE NEXT PROVINCIAL ELECTION

It is obviously tempting for the new Premier, operating in a minority situation, and having a recent further reduction in his caucus, to call the election sooner rather than later. This is  particularly the case because Dame Moya Greene will provide her interim report on February 28, 2021 and final report on April 30, 2021, focusing in large part on our fiscal crisis and  how we should respond.

In addition, we have so far had a good public health response to the pandemic and federal programs have alleviated to a large degree the economic impact on most families. Given the imminent rollout of the vaccine, and should the caseload remain low, it will be to the political advantage of the government to go to the polls sooner rather than later.

And finally, the governing party is riding high in the polls

The Government should resist that temptation.

If the Industry, Energy and Technology Minister had cleaned house at Nalcor immediately upon his arrival, we would have applauded him. No applause is necessary.

How many successive years has it been; repetitious and frustratingly undeserved bonuses given to Nalcor officials? Why is government so deaf? How is it that no institution in the province possesses the capacity to, at least, nudge them to change?

It seems Andrew Parsons knows not where to begin. It is a far tougher job than the Justice Ministry, a place where rules abound, a bevy of lawyers administer them and even make the political role routine.

Industry and Natural Resources is different. It requires personal energy, brains, creativity, boldness and above all leadership.  The job has been vacant for a very long time.