A Document in Search of Good News

It was a foul day outside so what is a dog to do but read the Nalcor Financial Statements and catch up on the latest numbers as Stan Marshall says farewell at the morning press conference.  This short post delivers two notable items of public interest that went unacknowledged by the executive team at the event.

Big Losses in Oil and Gas

Somehow the loss of $49M in 2020 on “settlement of commodity swap contracts” did not get much attention.  Nalcor did talk at length about oil prices tanking and recovering but not this item.  To do so would be to admit management error.

The power of déjà vu says we have been here before.  Uncle Gnarley rightly chastised Nalcor for the loss of $66.9M in 2017 on a pure financial gambit after receiving $1.8B in funds through the second Federal Loan Guarantee to keep the Muskrat Falls project going.  That was reckless and ugly.  Parking the cash safely was not good enough.

Participating in futures markets for offshore oil sales, along with exposure to exchange rate risk is more obviously a part of the business that cannot be wholly avoided but still: a $49M loss is a major error.  Nalcor’s 2020 oil sales of $182M could have been 27% better.  A lot must have been gambled on the wrong side of the market, time and time again.

It is only reasonable to expect these things to even out in the long run.  The loss of $49M is a lot of coin.  This year may be no better though.  The Q1 2021 report shows a $22M loss on cash flow hedges.  The derivatives side of the business is not working well these and consistently so.

Deep in the notes are details showing that management has committed 56% of all production 12 months forward from March 31 at an average price of $52.72 USD per barrel.  The near 30% discount to the current market price suggests 2021 losses may exceed that of 2020 and may bleed into 2022. 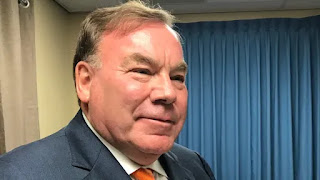 Besides that, two other matters of large financial impact have occurred.  On March 1, 2021, the Nalcor holding in the Hibernia South Extension was redetermined from 10% down to 8.7%.  This means Nalcor received revenue from too many barrels of oil prior to that date and owes the other partners $100M.  $38M was settled in Q1 2021 leading to $98M in comprehensive losses on $55M in net revenue for the quarter.  Its probably going to be a rough year.

Q1 2020 was worse though.  Comprehensive loss was $135M on $82M net revenue.  The 2020 Annual Report advises that an impairment on fair market value of the White Rose Extension and Hibernia South Extension assets was taken totalling a non-cash loss of $225M.  The notes indicate an assumption that long-term oil price to 2024 would average $52 USD.  If oil prices continue at current levels, part of the impairment could be reversed.  However, if current pricing is mostly a post-covid rebound where supply is lagging demand, oil prices will eventually settle considerably lower and the impairment must stand.

It’s a wild ride in the oil business these days but that sentiment is no excuse for the long-term habit of overvaluing assets and being all over the place on hedges and swaps.  Expecting a small Crown Corporation to compete and maximize returns in the oil business may be an experiment that has run its course.  One of the central pillars of the mighty energy warehouse concept is crumbling and should probably be torn down.

The Triple Threat of the Newfoundland Power Rate of Return Increase

Well of course Nalcor did not talk about this during their own Annual Report event!  Newfoundland Power is a completely different and unrelated company with its own General Rate Application now before the Public Utilities Board.  Why would Nalcor comment on this?

The reason is the threat to electricity rates and that Nalcor is supposed to take rate mitigation seriously.  In the Annual Report, Nalcor wants you to believe that they are really trying to assist with rate mitigation.  Despite that, Stan replied in direct response to a question that he hasn’t gotten involved in it.  Well, there is a CEO leading by example.

A CEO sensitive to the plight of regulated ratepayers who make up the majority of Nalcor revenue, might have shone some light on this one.

The Newfoundland Power application was recently covered in the mainstream media as requesting approval for an increase on rate of return on equity from 8.5% to 9.8% that NP says will only affect billings by 0.8% overall.   Framed like that it does not sound like much.  Looking into the NP GRA, reveals that their proposed revenue increase would be over $20M in 2022 and over $30M in 2023.

The issue being raised here for public awareness (and the Consumer Advocate and whoever else may be interested) is that if the PUB increases Newfoundland Power’s return, then two other utilities of interest are also automatically going to get their rate of return on equity adjusted.

The first is NL Hydro.  The regulator is compelled by legislation to give NL Hydro the same rate of return on equity as whatever it decides for Newfoundland Power.  Total revenue increase from this adjustment is likely to be over $30M.

The other utility is Emera whose investment in the Labrador Island Link requires an interest return rate equal to the prevailing rate in effect for NL Hydro.  This adjustment will tack on another $10M in required revenue for Island ratepayers.

The potential rate impact from adding about $60M in revenue requirement in the Newfoundland Power service area will be about 8% resulting in a full 1 c/KWh rate increase.  As rates for rural parts of the Island and the Labrador coast served by NL Hydro are based on the NP rate, they too will see the same increase.  Rates in the Labrador Isolated System would be assessed a much smaller increase, under 0.2 c/KWh.

All that would happen prior to the inclusion of any changes due to Muskrat Falls.  If ratepayers have any capacity to pay more for Muskrat Falls – like just 1 c/KWh – this move by Newfoundland Power ensures they will get it.  The rate mitigation negotiators had better be aware of that.

The PUB must review the evidence submitted and cannot choose to simply cut ratepayers a break.  Last time around, Newfoundland Power withdrew their proposed rate increase but chose to bring it back this year.  If the PUB finds that a fair case has been presented, then the other adjustments will follow on automatically.

At about the time this issue is decided on by the PUB, ratepayers may also learn their fate regarding rate mitigation.   Just like the strange June weather, sometimes when you expect rain, it snows.  Rate mitigation optimists may be best advised to think of something else.