An entire province is witness to a shaky Treasury being toppled as a result of a series of colossally bad decisions, taken first by Williams and Dunderdale and then by people inside Nalcor. Yes, the Wicked Witch has been wealthily retired, but Ed Martin wasn't the only culprit of doubtful competence.

From its very conception, Muskrat was at best a speculation, and at worst a contrivance. Its unfounded fundamentals were made worse by the appointment of an ill-suited cable TV manager to run the megaproject. 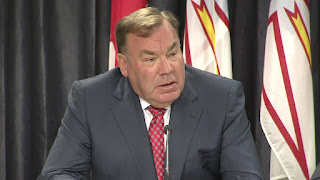 One might have expected Marshall to search world-wide for a few people of suitable pedigree to assist him. That did not occur. Indeed, his feeble realignments are shocking in their short comings.

Marshall did, however, manage to attract at least one fan of this display of dither.

NDP Leader Earle McCurdy ran to Marshall’s press conference fearful he had sold the works to Fortis Inc. and announced feeling relieved. As if private capital seeks out white elephants!

Those exhibiting more common sense would be worried public ownership of anything costs two or three times what it should. They would be preoccupied that Marshall had failed to exorcise the rot from that crown corporation.

Big minds are hard to find. And, in this case, Stan Marshall has waded through a shallow gene pool (and that is being kind!) and has come up with the very same people who helped create the Muskrat disaster in the first place.

Among them is Gilbert Bennett. We will return to him because his wasn’t the only re-appointment about whom we should be concerned. The other is Jim Haynes.

The decision to operate Newfoundland and Labrador Hydro as a separate business unit, engaged solely in activities regulated by the PUB, was a recommendation of the Liberty Consulting Group, an independent consultant acting for the PUB.

Liberty investigated Hydro’s management, maintenance records, and operating culture. The Group ferreted out what led to days of “black-outs” known euphemistically as #DarkNL.  Liberty learned that the security of the electrical grid was compromised by poor management and a lack of focus. Said Liberty: “Hydro needs a single executive under which it can consolidate the principal functions associated with delivering utility service…”

We should ask: just how “steady” was Haynes? Some might rightfully suggest that “motionless” is a better characterization.

When did #DarkNL occur? Only 8 months after Haynes’ retirement. This historic event began with rolling blackouts in late December 2013 which were followed by, as the CBC described, “full blown turmoil” on January 4, 2014.

Can we connect #DarkNL to Jim Haynes? We most certainly can.

It is a fact that makes his re-appointment by Stan Marshall disturbing – that is, unless the Reports of the investigation by the Liberty Consulting Group are rubbish. Here are just a few small items from Liberty’s two reports:

-          Hydro wasn’t using the right models to forecast electricity demand.
-        “Hydro has planned its system to the same overall standard for many decades (which)           provides for lower reliability than what Liberty has observed in other regions of North             America”… Hydro has “roughly twice” the frequency of supply related outages as found         elsewhere.
-          Overall reliability performance (2009–2013) has been below comparable Canadian               utilities.
What were some of the comments of the Public Utilities Board (PUB) following the Liberty Report?

-      The PUB found this statement particularly alarming: “Hydro stated that it is not aware that [it] is normal utility practice to provide the necessary resources to adhere to preventative maintenance schedules in addition to addressing emergent and critical capital work.”

-      The PUB stated: “The resulting findings by the board of imprudence by Hydro are significant and reflect failure on the part of Hydro's management… The consequences of this imprudence for customers are significant, both in terms of impact on service adequacy and reliability, as was shown during the outages of January 2013 and January 2014, and in terms of cost.”

Jim Haynes had a long career at NL Hydro including 12 years at the VP level. Degradation of Hydro’s equipment and the evolution of what Liberty described as a poor management culture were not found to have been the product of VP Rob Henderson’s eight-month tenure alone. Liberty’s damning indictment of NL Hydro, as one of the poorest run Utilities in North America, grew out of a far longer stretch: when Haynes was second-in- command.

This is not the stuff that inspires re-appointment. It merely suggests “good riddance.”

Did former CEO Ed Martin stymie Jim Haynes in his ability to operate Hydro as a modern electrical provider?

Did the PUB deny NL Hydro approval for funding to maintain equipment or to fund competent management?

If Jim Haynes experienced any of those difficulties, he kept them to himself.

Hence, he may have left Hydro enjoying the perception of a public servant in good standing. But he returns with an imprimatur tarnished by objective review—unless, of course, we suffer from the collective amnesia to which Ed Martin was fond of giving reinforcement.

Gilbert Bennett reminds us of what we hate most about recycling.

Stan Marshall, having cut his duties by half, wants us to believe that Bennett represents change.

Yet Gilbert Bennett, a former manager of Danny Williams’ cable company who possesses no experience as a megaproject lead, has been at Nalcor since the Muskrat Falls project was conceived.

He was there to help Ed Martin stick-handle the project away from full consideration by the PUB, to pillory the “naysayers”, and to admonish Dr. Stig Bernander, a Swedish expert on quick clay, over his well-publicized concerns about the stability of the North Spur.

It was Gilbert’s job to decide how contracts should be packaged—to oversee the contract language and project logistics that has Astaldi claiming additional hundreds of millions of dollars.

Did not Gilbert Bennett choose Astaldi—the one with no cold weather experience—as the project’s contractor?

Did he not fail to intervene as Astaldi wasted precious months gearing up for the work? As the schedule fell behind, finally falling off the rails altogether?

Did he not bolster Ed Martin’s assertions about “unit pricing” until they could no longer bear the burden of their inherent deception?

Was it not Gilbert’s job to install adequate standards of Quality Assurance, a problem frequently noted on this Blog, illuminated recently by the failure of a major concrete pour and by the miles of transmission line towers improperly installed?

Wasn’t it Gilbert Bennett’s job to install a competent management team on the project?

Isn’t it under Bennett’s management that the province holds its breath in fear that all those failures, and others, will leave us not with merely the highest electrical rates in North America, but possibly in a state of bankruptcy too?

Can we separate Bennett’s culpability from that of Ed Martin, who was fired as CEO?

On what basis is Bennett’s re-instatement, in any capacity, defensible?

Stan Marshall said he wants to keep him around, along with the others, "because they're good people".

No one has suggested Bennett, or any other executive at Nalcor, should not be considered “good people”. The question is: what are they good for?

Though Bennett’s role has been cut in half, his re-assignment by Marshall confers on him an unwarranted approval of his abysmal past performance. It sends a dreadful message to other executives at Nalcor, and to the other members of the project management team, about any requirement for performance commensurate with their titles and pay packets.

Bennett’s re-appointment is incredulous. It is an explicit commentary on Stan Marshall’s own poor judgement. It is proof that he has already ascribed to this publicly funded corporation a far lower standard than would be applicable to private capital.

Is Mr. Marshall overwhelmed by the mess at Muskrat? Has he been bamboozled by the very architects of the project who, for so long, have layered its complication with their own incompetence?

If Stan Marshall has discovered anything since becoming CEO, it should be that managing Nalcor is not the same as a normal day at Fortis Inc. where growth (organic or by acquisition) is achieved amidst a talent pool assembled over many years. There, questions about the viability of new projects are not smothered by politicians or by the private agendas of a group for whom Muskrat represents a golden chariot delivering a comfortable retirement. Nor did Fortis Inc. thrive by giving career shelter to the ill-suited and letting them screw up.

Nalcor needs steady hands to be sure. But the sheer magnitude of the problems at Muskrat Falls evokes thought of the need for a Hank Van Zente, who put a failing Hibernia GBS back on track. Exxon Mobil did not engage in the wishful thinking afforded by the limp stir of a shallow gene pool.

If Stan Marshall can keep Nalcor executives, including Gil Bennett in spite of his miserable failures, then why didn’t Ball keep Ed Martin, too?

Marshall’s first steps are not just disingenuous; they are perplexing, given the kind of decisions on Muskrat that must soon follow.


Loudly, they make the pronouncement: Don’t get your hopes up that change is any more a part of Stan Marshall’s lexicon than it is of Premier Dwight Ball’s.
Posted by Des Sullivan at Monday, June 20, 2016