In the first part of “Rightsizing Expenditures”, I presented the first five ideas to reduce the annual provincial budget by 10%.  This is a continuation of that post; the ideas discussed taken together, constitute an attempt to identify measures to achieve this recommended target.  As a spoiler alert I should inform you, despite all the austerity measures proposed, I was unable to achieve the 10% target.  Nevertheless, here are my additional views on the subject:

6.            Transportation and Communications
The annual “Estimates”, produced with each budget document, contains an informative exhibit which describes “Where the Money Goes”.  The following is the excerpt from the 2015 Budget. 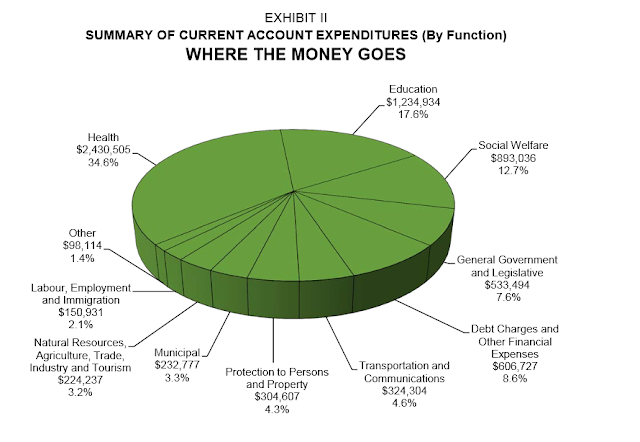 During the current fiscal year, the province proposes to spend $324 million on transportation and communications.  As shown in the graph below, this value has increase by about 120% in real dollars since 1995. 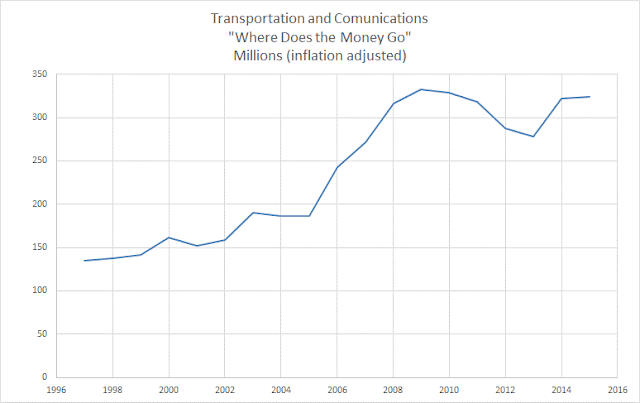 One can’t review the budget allocation for “Transportation and Communications” without having a much larger discussion about services to rural Newfoundland.  Those costs need to be reduced, allowing an historical reference point to guide future expenditures.

One controversial topic is the cost of providing coastal boat services.  I suggest that, within the next five years, we must cut all coastal boat services to any area having a population of less than 500.  Taxpayers can no longer support communities where the cost of a single service is completely disproportionate to its economic contribution. We pay $80M annually on coastal services for less than 15,000 people.  That is $5,000 per person per year! As the rural population declines the per capita number will just increase. As politically unpalatable as all governments regard the subject, I suggest we need a discussion now, to properly plan for specific community relocations.

A similar discussion can be had regarding road and bridge upkeep. The province’s infrastructure is in very poor condition.  Like the coastal boats, this infrastructure cannot be maintained in the smaller areas for a diminishing population, regardless of what politicians say.

Notwithstanding the need for a 10% cut across all government expenditures, transportation and communications cannot be neglected.  I would target a reduction of $30 million from current annual expenditures.

6.       Health
Like transportation, there can be no discussion about downsizing government in the absence of a real debate on the future of health care.  I suggest the discussion needs to be focused on three key points.  They are:

Given our aging population, it is not reasonable to decrease the total health budget (other than through the reduction of staff as mentioned in item 1 in the previous post).  The province should hold the line on current expenditures as it seeks ways of providing more efficient services.

The health care field contains many places where efficiencies can be found and abuses eliminated.  We need to begin identifying the most egregious and start correcting them.  But real change should begin at the top and not just with administrators.  Physicians should not be the oligarchs of Newfoundland society. They are public servants, too.

Although the province has recently made some much needed change to the public service pension plan  government’s claims to long term sustainability seems suspect, considering how minor the changes.  Additional data should be released to substantiate the claims, especially the assertion of an 84% probability the plan will be self-funded in 30 years.

I suggest the government needs to implement the following changes immediately:

1)      New employees should have a defined contribution plan rather than a defined benefit.
2)      The minimum retirement age should be 65 or 35 years of service.
3)      There should be no double dipping on pensions permitted.
4)      Pensions should not be based on the best 5 or 7 years earnings of an employee.  The
pension should be indexed exactly to the average annual salary over the full duration of the   employee’s period of employment.

Anyone in the private sector who has directed that their financial advisor determine their annual RRSP contribution, to ensure 70% of their best 7 work years, indexed, and with medical benefits, will truly understand how difficult it is to retire at age 60.

Conclusions
Each of the eight ideas for cutting 10% from the annual budget could justify a lengthy and detailed post.  So, these comments constitute a mere beginning. Hopefully, readers will weigh in with their own views. However, one thing is certain:  as I studied the estimates in order to address the question “where would I cut?” I quickly concluded it is impossible to arrive at real cuts, unless a fundamental shift in the way services are delivered to the rural areas of the province is contemplated.

In addition, whether it is the College of North Atlantic which operates 17 separate campuses, or the unrealistic demands for a plethora of health care services, in areas with small populations, we can’t have a real discussion on reducing the budget without addressing the two other major issues.

The first of those is the aging demographic, which is a crisis unfolding in front of our eyes - in both the rural and urban centers.

The second is the reality that the small outport way of life can’t be resuscitated, in spite of the amount of government money devoted to the attempt.

My personal story reflects that reality.

The town in which I spent my formative years has a population of about 250 people; the average age is 65.  I will never live permanently in that community again.  This is a choice made irrespective of economic opportunity or job prospects.  Like many of my generation, I simply do not want to live in a town of 250 people. In 20 years, this small town will be reduced to 200 people; the average age will be 75.

The inevitability is that unforced resettlement will continue to occur.

High oil prices have enabled a decade of inaction by government on the problems represented by demography. I suggest that convenience is at an end. The economic realities represented by 50$ oil, declining production, and limited federal transfers, will impose on us the necessity to make tough decisions, and they will need to be made within the next 5 years.  The catalyst will simply be financial disparity.   The first of the baby boomer cohort will start reaching age 70 in 2016; the cost of sustaining small rural towns will be exacerbated, even if the province’s financial situation improves.

The impending provincial election campaign is a time when those issues, and the ideas to deal with them, should be discussed in earnest; though that is not likely.  Our politicians seem inured to fiscal reality.  Whether it is the promise of student grants, the refusal to reign in the size of the public service, except through attrition, or the willingness to ignore the possibility tax hikes may be required,  they are content merely to keep borrowing.

With a total NL public debt nearing $12 billion (Muskrat Falls included) we are nearing a very uncomfortable place for a population of 0.5 million.  Puerto Rico, the Caribbean archipelago that is an American territory, has just defaulted on its public sector debt.  It has reached $72 billion. Puerto Rico’s population is 3.5 million; seven times our own. The math is as compelling as it is disturbing.   We should think about that.

Having chosen to retain his anonymity, JM is prepared let his articles be judged on the research and argument each contains.
Posted by Des Sullivan at Thursday, August 06, 2015