The release, yesterday, of a statement by fired former Nalcor CEO Ed Martin underscores a concluding comment contained in Monday’s Uncle Gnarley Post. It is this:

“That he (Premier Ball) would afford a bunch of Danny Williams’ cronies, including Ed Martin, such power over his own political future, giving himself no protection via a paper trail and having failed to disclose the firing on the heels of Martin’s ostensible retirement, constitutes one of the worst acts of political stupidity since Dunderdale declared DARKNL ‘not a crisis’.

Ed Martin’s written recollection of the two meetings (April 17th and 19th) held with the Premier might give rise to an expectation that Dwight Ball is able to refute Martin’s assertions with the release of his own notes or ones taken down by his own officials.

The Premier could produce nothing of the kind. He is left standing by an inconsistent verbal record, unwilling to release even the Department of Justice opinion on the issue, having promised to so do. He does not afford even a peek into his claims of truthfulness or give us reason to have confidence in his integrity or his leadership.

While the Premier can be condemned for engaging in behaviour pundits call “amateur hour”, it would be unwise to bring the curtains down on Premier Ball just yet, even if any latitude the Caucus or the public may yet afford him is very slim.

Such a caution is warranted for essentially two reasons: 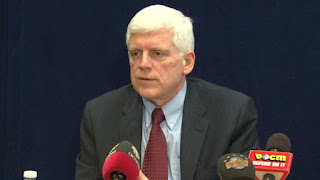 First, Ed Martin has acknowledged he engaged in a charade with the media and the public. The former CEO wrote: “…reiterating my offer to stay on provided the constructive dismissal issues were reasonably mitigated, I choose to accept the government’s decision and depart gracefully by stepping down.”

“Departing gracefully” hardly seems the same thing as fired, does it? When is a lie a euphemism for the truth? Yet both men stood at their podiums and declared Martin had voluntary retired.

Martin proceeded to say in his two page release: “…I cannot stand by, from a values perspective, and allow the lack of clarity to impact the integrity of board members…” Unless you count deceit as a value, the sophistry takes your breath away!

Second, who communicated to the Nalcor Board any decision taken during Ed Martin’s final meeting with Premier Ball?

Did the one who was fired, the one seeking the gift of severance, give those instructions to former Board Chairman, Ken Marshall?

Or, did the Premier, his Minister, or the Chief of Staff advise Ken Marshall of the Government’s position and, through him, ask the Board to comply?

Until we discover if it was only Ed Martin who issued instructions to the Board, or if the communications occurred via the Premier or someone connected with him, Ed Martin’s written cry of righteousness is an indictment of himself as much as it is of Premier Ball.

Still, Martin’s missive hardens the view someone is either lying or trivialized the $1.4 million severance. The Premier, too clumsy by half, is unable to extricate himself from suspicion.

Ball is not helping himself when he should be fighting for his very survival.

He confirms that we have reason to be suspicious of him and to doubt his integrity having asked the Auditor General merely to report on the “appropriateness of the severance benefits received by Mr. Edmund J, Martin…” That is a matter quite distinct from whether the Premier approved the severance arrangement, and whether he lied to the public about it.

The issue involves legal questions to be sure, but even more than the money central to the issue on the public’s mind is whether this Premier is a person of integrity.

The A-G is not equipped to ferret out the issues which cloud that question. It is doubtful he has broad enough powers of inquiry to get to the bottom of the severance issue itself.

The A-G can determine whether, in having granted the severance payment, the proper financial controls were adhered to under various policies and procedures.

But can he establish that under law the severance was legal?

Given he is an accountant and not a lawyer, can he establish the entire sequence of events which led to the payment to Ed Martin, to the decision which saw the Premier make a false public statement, and to the Premier’s subsequent denials he approved severance or ever discussed it?

The Government’s asks the A-G to determine the appropriateness of the severance payment under Section 16 of the Auditor General Act. But it is under Section 18(1) where the A-Gs right “to examine a person on oath or affirmation…” is found, and only then “on a matter pertinent to an account submitted to the auditor general for audit…” It is not certain at all whether the Government’s request is an ‘an account submitted for audit’.

Anyone who reads the A-G’s review of the Humber Valley Paving affair will readily see why he should be excluded from matters outside the accounting field. Not the calculator, but the right to subpoena evidence and conduct a cross examination of witnesses are the tools used in the search for truth. Lawyers and judges serve the purpose well. Ball's reference, in the House of Assembly, to "interviews" the A-G might undertake as opposed to "cross-examinations" suggests he misunderstands the process, else he has taken bad advice.

Indeed, the job given the A-G is best performed by a former Judge whose retirement has not diminished his legal scholarship, experience, or independence. Ball also has the option of referring the matter to a sitting Judge.

If Ball is unafraid of the outcome, he will beg the A-G to defer to a Judicial Inquiry. That is really the only process that will get at the whole truth and restore public confidence in the government.

On the other hand, if Ball digs in his heels, cowering under public outrage, he will receive no relief from this political nightmare.

At the very least, the Premier must give the A-G a wider terms of reference as well as better suited and unfettered powers of inquiry, specifically under the Public Inquiries Act.

Overt transparency is Ball’s only hope of political salvation. The Premier is a man hanging on a thin thread of credibility. It is barely greater than Ed Martin's.

He can hide behind an ill-equipped A-G for now.

But soon we will hear from the former Nalcor Board Chairman, Ken Marshall; likely no friend of his. And the questions will begin again.

Then, too, the Liberal Caucus has a role to play to play in how long Ball survives. If there is a modicum of wisdom among that group they will dictate the terms under which Ball is permitted to stay. What affects him affects them.

Unless they are willing to practice politics under an atmosphere of distrust, they will insist that he call an inquiry under the Public Inquiries Act or move aside.

Ed Martin's allegations are of a kind that not just threaten Ball's but their political survival, too.