RISSA LANDSLIDE AND THE NORTH SPUR

On the 29th of April 1978, a marine clay landslide devastated large areas of the rural district of Rissa in mid-Norway, near Trondheim. One person died while 13 farms, 2 homes, a cabin and a community centre, were taken by the clay masses.

By good fortune there were two amateur photographers in the vicinity with movie cameras who were able to capture the earth movements. One had to run for his life! These have been included in a very interesting 21 minute documentary entitled "The Quick Clay Landslide at Rissa - 1978 (English Commentary)" available on the Link. 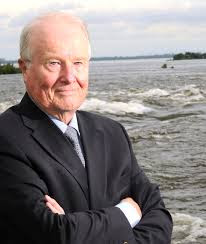 The majority of the Rissa landside occurred within 4 hours. Parts of the slide flowed out at a rate of 30 km/hour. The slide covered about 1km along the shore of Lake Botnen and caused small waves to flow 5km across the lake to inundate the village of Leira, severely damaging all lakeside structures. 200 people were evacuated from the slide area which covered 330,000 square meters (equivalent to 74 football fields), and displaced about 5 to 6 million cubic meters of marine clay.

The Rissa documentary contains a chart (at time 16m 20s) showing the soil properties obtained from drill holes, from which the following data has been obtained.

For comparison, the North Spur data was obtained from the Poster Presentation at the First International Workshop on Landslides in Sensitive Clays, 28-30 October 2013 at the University of Laval, produced by R. Bouchard, A. Ceballos, N. Dayan, A. Tournier and R. Llett, from the Lower Churchill Project Geotechnical Delivery Team, Figure 12.

The soil properties are remarkably similar, except for the undrained sheer strength, which is between 2 and 5 times stronger than the Rissa marine clays. However, from the only drill hole data available, that for hole d2, drilled in October 1979, the log shows a sensitive brown silty marine clay of low to medium plasticity between elevations 10m and 28m, where the sheer strength varies between 25kPa and 37kPa, only slightly above the Rissa sheer strength.

Note that the Spur clay has a very similar salt content. This is of concern at the North Spur dam, since the salt content will be slowly reduced as river water percolates through the dam flushing out the salt, particularly on the clay-silt interface of the marine clay where reservoir water passing through defects in the cut-off wall will flow along the marine clay surface. This surface is sloping downstream, facilitating the development of a massive slide failure.

Roberta Benefiel, President of the Grand Riverkeepers Association, based in Goose Bay, has undertaken a similar liquefaction experiment with the same results, but producing a more viscous fluid similar to cake batter, instead of a fully liquid compound, indicating the slightly higher strength of the marine clays around Muskrat. Roberta’s video, which takes about 4 minutes to download, can be viewed here.

If the download time is considered to be too long, an identical test producing the same results with about the same viscosity as obtained by Roberta can be viewed on You Tube, here.

The landslide danger at Muskrat is not new; it was pointed out by the Geological Survey of Canada in a PowerPoint presentation to the residents of Happy Valley-Goose Bay in 2013, which contained the comments –

This illustrates why it is absolutely essential to review the geotechnical design of the North Spur engineered dam – the risk of a landslide is just too high. The review team should include experts with extensive experience in marine clays.
_______________________________________________________________________
Editor's Note:
Jim Gordon has authored or co-authored 90 papers and 44 articles on a large variety of subjects ranging from submergence at intakes to powerhouse concrete volume, cavitation in turbines, generator inertia and costing of hydropower projects. He has worked on 113 hydro projects, six of which received awards "for excellence in design" by the Association of Consulting Engineers of Canada. He was also awarded the Rickey Gold Medal (1989) by the American Society of Civil Engineers "for outstanding contributions to the advancement of hydroelectric engineering...". As an independent consultant, his work assignments have ranged from investigating turbine foundation micro-movements to acting on review boards for major Canadian utilities. He has also developed software for RETScreen and HydroHelp.