THE BUDGET COLLOQUY: THE FINAL CHAPTER?

The final post intended to conclude the Budget Colloquy on the Uncle Gnarley Blog did not appear during the Summer, as intended.  It was just as well. The pre-Christmas budget “Update” has provided a more current, but no less grim, appraisal of our worsening problem.

The mid-year budget "Update" has shown that the government has experienced both a collapse in revenues, and, unbelievably, an increase in program spending  during 2015: 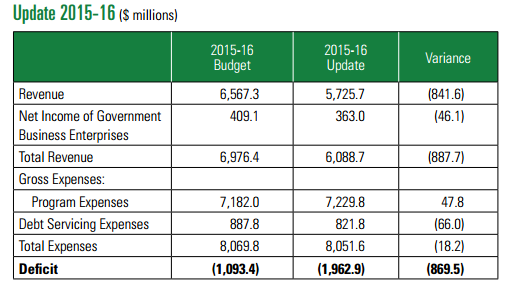 Table 1:  Fall 2015 Update
Based on a more realistic assessment of future revenues there is now a $2 billion deficit forecast for each of the next 5 years.  In the opinion of the Author, even these revised future estimates remain grounded in optimism.  Without real cuts in spending the deficits will only worsen from those predicted by the government.

On a cash basis, the province is now predicting $15.4 billion in new borrowing over the next 6 years!

The figure assumes there will be no further increases in the ‘equity’ required for the Muskrat Falls project.  Again I believe this is an overly optimistic assumption, and it would be wise to assume that at least another $1 billion of new borrowing will be required before that boondoggle is completed. A figure of $16.4 Billion is a staggering amount of new debt for province of our size.  It is not something that should even be contemplated.

I started this budget colloquy with a quote from the 1933 Amulree Report, which reviewed the status of the Dominion of Newfoundland, and which ultimately lead to the abandonment of democracy.  The parallels with the period 1920 to 1930 and the past 10 years are eerily similar.    For those who doubt the severity of our current situation, Table 3 will provide cold comfort.

Table 3 was completed by Ed Hollett of The Sir Robert Bond Papers Blog.  It compares the current program of borrowing with what happened to Newfoundland leading up to the end of responsible government. 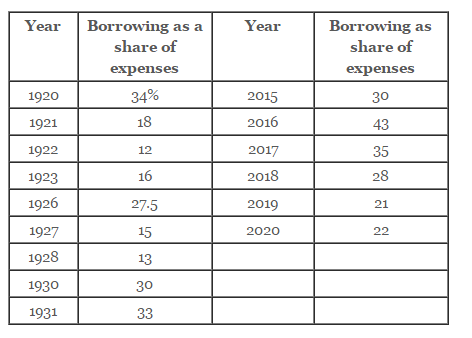 Table 3:  Summary of Borrowing as a Share of Expenses

If we have learned anything from voluntarily giving up our democratic franchise, it is the massive burden of debt servicing and the impact it has on government’s ability to function.   In the period from 2015 to 2020, debt servicing costs will increase from $820 million to $1.4 billion annually.  Without a return to a balanced budget, this will only continue to increase.

We are in the debt spiral.  Urgent action is required. It cannot be delayed.

In my opinion, we are also in a period of prolonged oil price collapse; one similar to that which occurred in the early 1980’s.  If this comparison holds, and we have 10 years period which oil prices remain below 75 $/barrel (real price), we can expect that deepwater development will be stalled, and payout on Hebron delayed.  New revenue growth will be very difficult to achieve in a low oil environment.  Government can not wishfully hope for a return of 100$ oil.  We cannot plan to annually borrow $2 billion in perpetuity either.

Every year we borrow $2 billion will generate nearly $80 million in new debt servicing costs. Every year we delay cuts, will eventually require that we cut another $80 million in program spending to return to a balanced budget.  Any eventual reduction in our bond rating will add another $50-75 million annually in debt servicing costs, and required cuts.

I repeat Newfoundland and Labrador are in the debt spiral.  Urgent action is required. It cannot be delayed.

Although I appreciate the Ball government does not want to accelerate the softening of the local economy, cuts will have to be made.  They are inevitable.  What the Liberal government must realize is that we still have a relatively strong economy.  It is much better to start the cuts now, as opposed to waiting until March 2017 as suggested by their consultation road map. 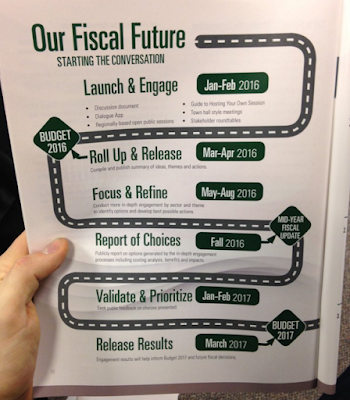 The completion of our resource projects will assure the economy, in 2017, is weaker than today.

Cuts should not be delayed.

The work done by the government departments is adequate enough to understand where the cuts are required, and where are potential sources of new revenue.  More consultation is not required.

The new revenue sources noted in the post "Getting Back to Basics"  are summarized below:

The spending cuts identified in the post entitled "Rightsizing Expenditures"   are summarized as:

These measures may have been originally interpreted as extreme.  But the reader should note that, combined, they would not reduce the current deficit by even 50%!!!

To demonstrate the impact of debt servicing, the spending cuts noted above are not even sufficient to compensate for the $600 million of new debt servicing charges identified by the government in their 2015 Budget Update!

This is why the suggestion, “we are in a debt spiral”, is neither ill-defined nor unwarranted. Indeed, without substantive action our debt will threaten every aspect of our society from health care and education to existing pension obligations.

More borrowing will only exasperate the situation.  Delay cannot be entertained.  We should look to 1929 for an historical reference.

To conclude, we need to immediately start raise taxes to the tune of $500 million annually. We need to cut spending by $700-800 million.  Every year of delay increases the required cuts by $80 million.

We are undeniably in a crisis.  I am deeply afraid that a delay of another 1 year, in consultations, will be the final death knell for the province.