WHO REALLY BENEFITS FROM MUSKRAT FALLS?

Nalcor's most recent estimate of the capital cost for the Muskrat Falls project is $11.4 billion. Emera is spending $1.6 billion for the Maritime link (ML) to NS. The total capital investment on the venture is $13.0 billion.

The table below - at Line 2 - confirms Nalcor’s estimate of total annual power production from the project at 4.642 TWh. The table also puts at 1.192 TWh Nalcor's most current estimate (June 2016) of how much electricity Newfoundlanders will use in the first year full power is produced. The amount committed power to Nova Scotia, under the Nova Scotia Block, is 1.220 TWh. The balance - 2.230 TWh - is the amount Nalcor can export - though approximately 80% of this power is also committed to Nova Scotia.

Nalcor estimates the annual cost of the electricity for the first full year of power at $737 million. Based upon consumption estimates for the Island of 1.192 TWh, the math suggests the rate for the power from Muskrat Falls will cost Newfoundlanders 61.8 cents per KWh.

By comparison, Nova Scotia estimates its costs at $160 million for the 1.220 TWh it will receive. The math calculates that province's rate at 13.1 cents per KWh.

Nova Scotia has the advantage of a contract (known as the Energy Access Agreement or EAA) to buy most of the excess power from Muskrat Falls. It will be purchased at market rates. The table below is based upon 5 cents per KWh (in line with market rates in New England where they are set by auction).

With the advantage of buying the additional power, Nova Scotia has ensured electricity costs from Muskrat Falls will be very competitive. The combined rate - for the Nova Scotia Block and power purchased under the EAA - could reach below 8 cents/KWh, as shown below. Newfoundlanders will have heavily subsidized Muskrat Falls power to Nova Scotia.

In stark contrast, Newfoundlanders will have to pay 52.4 cents for Muskrat Falls power even if Nalcor reduces the rate by the full value of the export revenues. In a nutshell, Nova Scotia has secured most of the power generated from Muskrat Falls for only 12% of the total capital cost. Newfoundlanders, on the other hand, will have to pay 88% of the capital costs while using only 26% of the power.

Readers will recall that under the original plan for Muskrat Falls Nalcor invoked the 20/20 provision - Nova Scotia was to get 20% of the power for 20% of the capital cost.

The public review process protected the Nova Scotia consumers. In this province, the government denied the people their right to public review - a process that might have protected us from the mess our political masters have bestowed on us.

It is reckless for the current government to proceed without giving the public the evidence on which its decision to continue building this “boondoggle” is based.

The government should at least refer the continuation of the construction of this project to our PUB.

We have a right to know whether or not cheaper options are available.

One option that needs review is whether it is feasible to complete the transmission from Labrador and import power at market rates rather than build a powerhouse and dam at Muskrat Falls.

Without a dam and powerhouse, there is no methyl mercury, no safety risk of dam collapse, and power rates that will likely be far less than 61.8 cents per KWh.

In short, Muskrat Falls is denying us very low electricity costs we would have realized from Churchill Falls in 25 years. 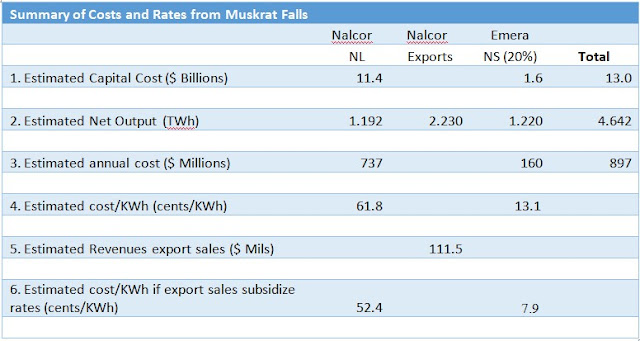 1. based on most recent estimates from Nalcor
2. based on Nalcor’s estimated net MF power generation & contracted power committed to NS
3. based on cost from Nalcor June 2016 & costs presented to UARB in NS
5. assumes export sales at 5 cents /KWh
6. assumes all surplus power is purchased by NS – 80% of it is committed