It was not abnormal for my old friend Uncle Gnarley to pay a visit.  But it was certainly abnormal for him to call in advance.   It was at sunrise, this morning, when the phone rang, the old gruff voice was more effective than any alarm clock in getting my blood moving, “Have you read it Nav….?”


But, before I could answer, he continued with his usual charm, “I am coming over this evening, I want to discuss some if it’s finer points.  Be sure that you drop by the Controller’s today”.  With that the phone went dead.
I was’t sure if I should read the Term Sheet, but I knew I had better pick up a bottle of Oban.  Gnarley may be forgiving with the former, but I would certainly feel his wrath, if I had forgotten the latter.


At about 8 o’clock evening, the knock came on the door and I welcomed the old economist into the den.   Gnarley was the first to initiate the discussion.  “There are presently hundreds of well-trained engineers, lawyers and economists working on the Muskrat Falls project.  With 500 million spent, the engineering is substantially complete, and they are frothing at the mouth to have the project sanctioned, so that commitments can be made on the long lead equipment.
But, Nav, one of the greatest challenges of running such a large project team is to make sure that the engineers, economists and the lawyers are all talking to each other.  They call it the interfaces, and let me tell you they are important.  The success of a project is often defined by good management of the interfaces between the various elements of the team.  Failure is often caused by details that fall between the cracks”


“Now, Nav, this  is why I wanted to meet this evening.  I wanted to get your opinion on this interface issue and how it has manifested itself in the Federal Loan Guarantee”.
I knew that the single malt alone would not be sufficient to pacify my old friend.  I regretted not reading the Term Sheet during the afternoon.  However, I did recall some of the press conference on Here and Now.
“Well, Gnarley, I believe it was a great success for the Premier.  To get an irrevocable guarantee on the project debt is a great success, indeed.  It may well represent the last hurdle for the project”
“Nav, this is what I am trying to get at.  The Premier states that this is an irrevocable agreement.  But it is riddled with legal and technical loopholes which will provide the Federal Government ample opportunity to get out!  My question is this: has the agreement been fully vetted by all the teams within Nalcor?”


“Now, Uncle Gnarley, surely you do not think that the engineers and lawyers of Nalcor did not review this document”?
“Nav…the Premier did not know the Loan Guarantee was completed!  It is safe to assume that the engineering and legal leads were not aware of the final draft.  Was it reviewed by all the required parties prior to being signed”?


Now, I knew the strain of Muskrat Falls was taking a toll on the old man.  His objectivity on the project was lost about the same time as Nalcor’s.  But, I was interested in seeing what else the great economist had to say.  I was also interested in the great stack of papers he had jammed in his recycled binder.  I motioned to his bag and asked “What do you have Uncle”?
“Nav, I have a collection of papers which will hopefully prove my point.  The first is the Loan Guarantee itself”.  He pulled out the 20 page document, dogged and covered in coffee stains.  “Nav, you may not be aware, but the Federal Government can get out of this commitment for a countless number of reasons.  Some of these are normal for this type of agreement, but there are a couple of default provisions which cause me concern.  One of the biggest is the requirement for the work to follow ‘Good Utility Practice’.  That, in itself, is not disconcerting.  What does concern me is, what defines good utility practice, is decided by the Federal Government’s watchdog, innocuously called the ‘Independent Engineer’.  Sure, you should read the language yourself, Nav.  But, the entire Loan Guarantee can be revoked if the Independent Engineer deems that Nalcor or Emera didn’t follow good utility practice.”


With that Uncle Gnarley passed me over the Term Sheet and pointed his finger to Article 4.13: 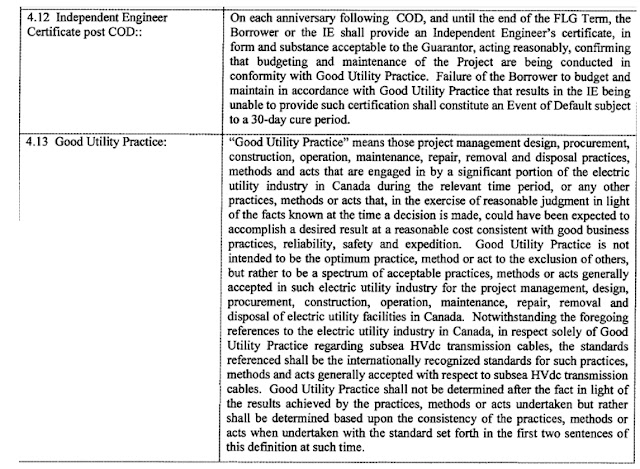 My initial response was that the old Economist was truly wet.  I felt I had to defend the professionals at Nalcor.  “But Uncle Gnarley surely with the 500 million spent in engineering and other works the design is consistent with good utility practice”.


With that challenge Uncle Gnarley stopped and took a wee dram of Oban.  The wink was confirmation of my careful selection for this evening.


“Well Nav, Nalcor may believe they are following ‘Good Utility Practice’ but, it is important that the Independent Engineer also agrees with this evaluation.  Which brings me around to my opening volley this evening about interfaces.  I am not sure if the lawyers who reviewed the Loan Guarantee, for Nalcor, were familiar with all the engineering reviews completed by the various third parties.
The old economist was now clearly in fine form.   His mind was at ¾ throttle, and building speed.


“Now, think back to the Public Utilities Review from earlier in the year.  Despite it being dismissed by Government, there were some very good recommendations.  One was the design criteria for the transmission lines through the Northern Peninsula.  Manitoba Hydro was not blind to the obvious, and suggested that the onerous alpine conditions be used for a 1:150 return period”.
With that Uncle Gnarley handed over a second piece of paper.  “From Volume 1 of their final DG2 Report.   There were several instances where MHI noted that Nalcor does not adhere to best utility practice.  Take for example the design of the HVDC Lines to NERC standards”

Now in Nalcor's Final Submission to the Board of Public Utilities, the Company did note that they may not always follow Good Utility Practices.  They argued that the application of ‘best utility practices’ may be cost prohibitive to the island consumer.  In their response, Nalcor eloquently responded to the various technical issues identified by MHI.  But, in the case of the NERC guidelines and the transmission line design, MHI’s recommendations were largely ignored”.
With that, Uncle Gnarley looked at me.  Like a lawyer in the courtroom, the old economist was pausing more for the benefit of the jury, rather than himself.  He then continued.  “Nav, we all know that there was no opportunity for the PUB to pass judgment on this.  But, these issues were again raised during the DG3 works.  Nalcor addressed the departure from recognized North American standards within their Terms of Reference for MHI.  Gnarley then passed over the terms of reference, his third exhibit in the proceedings:

I was starting to realize the importance of the term ‘Good utility practice’.  I asked, “all of this was almost a year ago; where do we stand now”?
“Well, Nav, you would have to ask the independent engineer, to know with certainity, if Nalcor is meeting ‘Good Utility Practice’.  For it is the only opinion that matters!  But I do want to finish my argument by identifying MHI’s opinion in their October Report on the Muskrat Falls Project.

“Nav, when it comes to the transmission line design, Manitoba Hydro argues that Nalcor still does not meet ‘Best Utility Practice’.  This is where I am not sure the lawyers who reviewed the Federal Loan Guarantee consulted with Nalcor’s engineers.  Right now, according to Manitoba Hydro, the project is not fully compliant with Best Utility Practice.  In accordance with the Loan Guarantee, it is now up to the Federal Government’s watchdog, the Independent Engineer, to make a decision as to what is, in fact, best utility practice.  A negative decision may put the agreement in default.
You see, Nav, this is what I have called the ‘Harper Paradox’.  How can a Loan Guarantee be considered irrevocable when it is in potential default before the ink is dry?
Gnarley clearly proud of his reasoning took up the glass as a reward for his self-proclaimed genius.


I then asked,  “Uncle Gnarley, it seems we have to call the Independent Engineer into the House of Assembly to get answers to some of these questions, prior to sanctioning?  We don’t want to spend 6.4 Billion dollars before we figure out the solution to that particular paradox”.
With that momentary utopian slip of the tongue, we both laughed whole heartedly.  In this democracy, calling witnesses is like the design storm.  It only happens once every 50 years.   I only hope that Harper proves to be more predictable than the weather.  Our Power is in his Hands, now.

JM
(Editor's Note: JM is the anonymous author of a 175 page Submission to the Public Utilities Board (PUB) entitled: Muskrat Falls - The Benefits of a Phased Development. He has also written Labrador Mining - A Reason to Rethink and Upper Churchill - The Unexplored Alternative). He has written several Posts for Uncle Gnarley Blog, most recently, The Pursuit of Apathy.