In recent months, Radio station 590 VOCM has employed the services of Open Line Host, Tim Powers.  The public record confirms Mr. Powers, through his consulting firm Summa Strategies, is a registered lobbyist, to the Government of Canada, on behalf of Nalcor. The exhibit (next page), is located on the Registry of The Federal Office of the Commissioner of Lobbying.  Its reactivation date is 2012-12-01.


Mr. Powers began Consulting for Newfoundland and Labrador Hydro (now a Nalcor subsidiary) having registered, as a lobbyist, in 2006 (Federal Lobby Registration #777504-14002).  The date is important because that is when Premier Danny Williams started putting the Muskrat Falls Project together and confirms Mr. Powers’ long standing relationship with Nalcor as one of the early planners of the Muskrat Falls Project.
More specifically, the Federal Lobby Office records Mr. Powers’ area of activity as:  “assistance related to the Lower Churchill Project. Development of East-West energy grid.” 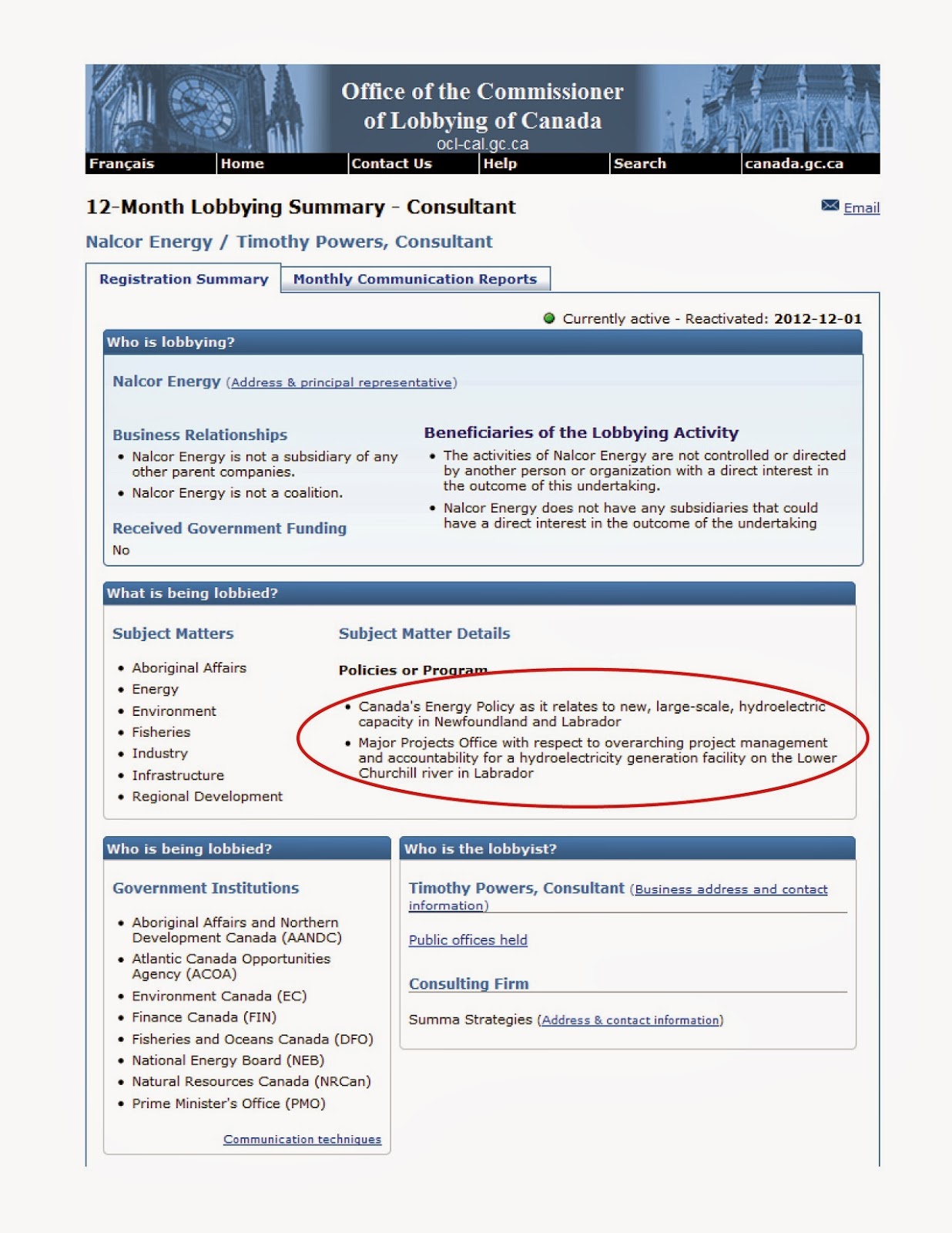 The Registry is accessible via the internet.


The most recent Lobby Registration also lists the issues over which Mr. Powers declared his intention to apply his lobby efforts and are very similar to those described in the 2006 Registration. They include:
* Canada’s energy policy as it relates to new, large-scale, hydro-electric      capacity in Newfoundland and Labrador
* Major Projects Office with respect to overarching project management      and accountability for a hydroelectricity generation facility on the lower    Churchill river in Labrador.

Nalcor Energy Limited is listed as the “beneficiary” of the lobby activity.


The Muskrat Falls Project is being developed by Nalcor on the Lower Churchill.


Lobbying is an accepted practice but only if it is properly disclosed to whom the lobbyist is making representation.  They need to be aware that the lobbyist is serving interests other than theirs.  For that reason the rules around lobbyists and consultants, even after they have ceased the practice, have been well developed and strictly employed in many governments and private firms, not only to avoid conflict, but to negate even the perception of a conflict.

“Purer than the salt from Lot’s wife” is a metaphor some invoke to describe the standard expected from  any professional group.


The Lobbyist's Code of Conduct  is located on the Office of the Lobby Commissioner’s Web Site.


In recent months, Mr. Powers acted as a temporary Host on VOCM Open Line and lately has been heard daily.  He has interviewed the Premier and Nalcor CEO Ed Martin.  He has discussed, on his Show, the Muskrat Falls Project and other electric power issues.


Even as Nalcor’s and the Provincial Government’s competence is questioned amidst a veritable political storm over the failure of the Holyrood Generating Facility and related power assets, Mr. Powers has been at the VOCM microphone.


What are my concerns?  I will describe three.


First, Mr. Powers seems not to publicly acknowledge his relationship, past or present, with Nalcor with the frequency necessary to ensure listeners are adequately informed of his potential conflict regarding electric power issues.


Though I listened to Mr. Powers, at various times during the blackout period and since, I did not hear him warn his listeners he may be in a position of conflict when such issues arose.  Others have reported that they have heard him, on occasion, acknowledge the potential conflict. Evidently, the disclosure is sporadic.


The Public has a vested interest in this matter because they look to VOCM590, among other media, for ‘news’.  If this were a discussion of widgets the public might be unconcerned.  But, news is a far different product; its quality revolves around assurances of integrity and objectivity.


Open Line Shows are a major platform for current political and public policy issues even if some Hosts describe themselves as entertainers rather than journalists.  During the recent days of rolling ‘black-outs’ Open Line Shows engaged in non-stop information sharing on warming rooms, displaced seniors, public charges of incompetence by Nalcor officials, the dangers of carbon monoxide poisoning, press conferences, specific interviews with the Government and senior Nalcor officials, including those directed by Mr. Powers.

Would anyone have thought them matters of entertainment rather than news? I wasn't laughing and I don't know anyone who was.


In the weeks and months prior to these events, as Guest Open Line Host, Mr. Powers conducted interviews on the issue of Muskrat Falls. They involved Government and Nalcor officials and members of the public, too.  I personally did not hear the essential disclosure of Mr. Powers’ relationship with Nalcor.


Can an Open Line Show Host conduct himself without “an apprehension of bias” in the course of interviews with powerful politicians and bureaucrats with whom, directly or through his Company, he receives, or has received in the recent past, monetary compensation?  Is it possible to serve two or more masters?

Perhaps, Mr. Powers can help me out with these questions, too.


Having been on the Nalcor payroll for so long, a Consultant to CEO Ed Martin and by extension Premier Kathy Dunderdale, is it truly possible that Mr. Powers believes that his questions of them throughout the electricity ‘black-out’, were as insightful, substantive and probing, as they might been had he not enjoyed such a long standing business relationship with them?


Would he have meted out a more extensive, intense and demanding cross-examination of their excuses, pretexts and management decisions?  Would he not have used the dire warnings about the state of certain power generation assets described in Newfoundland Hydro's Capital Budget, filed with the PUB, to remind them of what they already knew or ought to have known?

Would a more energetic Host he have better sated the public’s need for clear answers rather than succumb to the prattle of people in search of political cover for the crises unfolding?


Would Muskrat Falls or a latent ‘independent’ Government inquiry go unquestioned, as the proffered antidote to incompetence, were someone on a more singular mission in his seat?


Even the most naïve among us can claim certainty that if the Government’s Inquiry lacks the presiding authority of a Supreme Court Judge, it is not ‘independent’ at all.


What does he take us for? Who does he think he is?
VOCM has an obligation to require Mr. Powers to declare his potential conflict, announce that he works or has worked for Nalcor.  He must be required to perform this function clearly and unmistakeably, not just occasionally but, without fail, every time a caller raises the issue of electric power supply, the current outages and black-outs or Muskrat Falls, every time he interviews a senior official of the Provincial Government on the same issues, and  every time he interviews a Nalcor official on any matter.


Every member of the public does not listen to every word spoken on every Open Line Show.  Hence, such repetition is not only necessary; it represents the best way specific callers and the public can be assured of learning that the Host may possess an apprehension of bias.


Such disclosure would equally apply to issues relating to any other company, such as Alderon Iron Ore, for which company he is also a registered lobbyist (Registration #777504-308605).


Mr. Powers is a well-known political strategist and Consultant.  The Newfoundland and Government has no Registry requirement, as does the Federal Government.  Would Mr. Powers advise if he also a lobbyist for Nalcor lobbying the Dunderdale Administration or if he provides political advice to the Premier or members of the Provincial P.C. Party?


Indeed, Mr. Powers connection with Alderon is an important public matter, too, given his VOCM Hosting role.  Is Mr. Powers playing two sides of same deal?  Alderon seeks a break on a $300 million transmission line to Labrador West.  Would anyone claim that it is appropriate for Mr. Powers to discuss that issue, on Open Line, without referencing his potential conflict as a paid lobbyist for that Company?


Secondly, and this is also a critical point, it is the practice of VOCM to include cuts from interviews, conducted on Open Line Shows in its newscasts.  Just within the last few days, a cut from Nalcor CEO Ed Martin’s interview with Mr. Powers was aired on VOCM News. No disclosure as to Mr. Powers’ potential conflict accompanied that news report.  If this is journalism, in the absence of the interviewer’s disclosure, is it an acceptable standard of journalism?


Thirdly, the Provincial Government is a major advertising customer of VOCM and other radio stations within the Steele Communications organization.  There is nothing inherently wrong with such a commercial relationship.  Media organizations must have advertising revenues to operate and stay viable.


But, the potential for conflict is obvious.  The Nalcor/Powers/VOCM relationship places a heavy burden on the broadcaster to ensure its journalistic role is at arms-length, and perceived to be at arms-length.


Would such potential conflicts not worry the CRTC, the Broadcast Standards Council and other media overseers?


How hard can it be to search the Federal Lobby Registry, to pick up the phone and ask VOCM or Mr. Powers the questions I cite here and, perhaps, others?


Do I overstate the value of an independent media?   Are they the guardians of democracy they pretend to be? Are they on guard only sometimes, when it suits them, rather than when their vigilance is most demanded?  If so, please let me know so that I can lower my expectations!


“No blurred lines”, “no conflicts”, “no perceived conflicts” are valid mantras for VOCM and for all media.


Can you think of any other way to safeguard a disarmed public?