Likely everyone remembers #DARKNL. January 2014 - successive days without power followed by rolling outages - tens of thousands of people huddled in the cold and the dark.

It didn’t sit well with anyone – just ask Kathy Dunderdale.

The PUB initiated an investigation into the root cause of the power failures. The Liberty Group, a Consultancy, was hired to conduct the inquiry - which had two phases.

The Phase I Report, released last year, gave exhaustive details of the poor management culture at NL Hydro, the dreadful state of maintenance on Hydro’s generating assets, and the need for more generating assets to enhance reliability – which led to a new generator (sort of) installed at Holyrood.

The Phase II Report dealt with an “assessment of the adequacy and reliability of the IIS (Newfoundland island system aka “Isolated Island Service”) to meet customers' load both up to and after the interconnection with Muskrat Falls.”  It was released August 19th.

Liberty is quoted frequently in this Post. It is best that this narrative is described in the Consultant's own words. 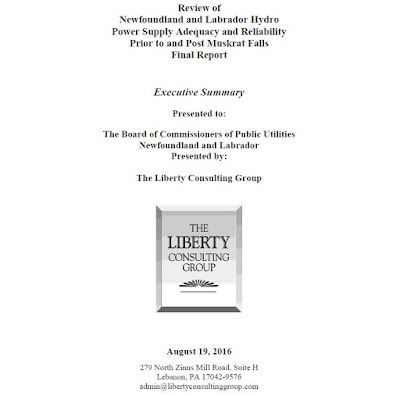 That the investigation occurred at all was a minor miracle.  It was supported by Newfoundland Power – somewhat late to the Muskrat game – their weight critical, nevertheless, to convincing the PUB serious issues needed further study. Several individuals, some connected with the 2041 Group, including this blogger, made submissions to the PUB to support the initiative.

Intervenors were concerned that a prolonged outage associated with failure of the 1100 KM extension cord traversing several climatic conditions including over the Long Range Mountains - given that the bulk of the load was located at the far end, on the Avalon Peninsula - would seriously threaten our economy and society.

Liberty noted that even with the addition of a new generator “more work will be needed …including two major features that Hydro is not necessarily considering at this time. Those features are (1) additional power supply and (2) expanded organizational capabilities.”

Liberty reminds us that the outages which occurred in January 2014 “were as much or more due to organizational issues as they were due to system inadequacies”. The Consultancy stated that those problems still plague NL Hydro. Having been previously addressed on this Blog, I will restrict today's comments to the post-Muskrat phase, except for one.

The source of this concern is what the Consultancy describes as “continuing problems with Hydro’s existing thermal generating units and the delay in the in-service date for Muskrat Falls increase the risk of outages until the interconnection.”

Liberty expects that this additional supply can be obtained “through firm purchases, if available, over the Maritime Link or additional new generation on the IIS”. In their own words, the Consultancy believes “…the supply risks are greater than suggested by Hydro’s assessment and that new generation is likely required prior to the interconnection.”

Liberty’s concern is not based upon an increase in demand as the Exhibit (below) confirms. Readers may remember that Nalcor acknowledged earlier this year that Load requirements will not hit the forecast level used to justify Muskrat Sanction until 2036. (Given a recent CBC report about consumers converting to oil that date may even be optimistic – the public broadcaster may want to inquire about increasing sales of heat pumps, too). 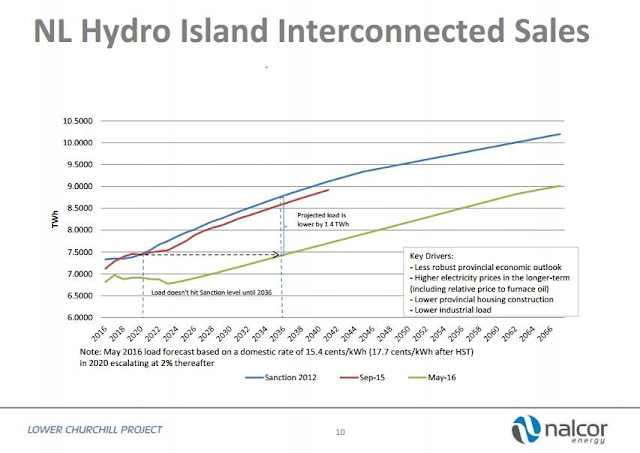 Liberty warned, in its 2014 Report, that despite the addition of a new generator at Holyrood “generation reserves are very low and the risk of outages remains high for the 2015-17 winter seasons.” This concern is now extended because “full power from Muskrat Falls is forecast as “mid-2020”….in time for the winter of 2020-21 (which) contrasts to the original plans of the winter of 2017-18.”

The risks of continuing outages relates not to just the bucket of bolts constituting Hydro’s existing thermal generation but also due to a “…shift to a 90% probability for the peak demand forecast from Hydro’s previously used 50%.” Liberty takes a more conservative approach to the winter peaking problem than does NL Hydro.

Hydro, as Liberty discussed in a prior Report, uses outages as a demand management tool - a practice it condemned. (In fact, the only problem Hydro ever had related to “peak” demand due to the unbridled installation of electric baseboard heating in new (primarily residential) construction which “policy” could have resolved. Nalcor essentially used this “false” problem to justify Muskrat Falls, ignoring the attendant risks.)

Outages Cannot be Avoided says Liberty
Post-Muskrat Falls, Liberty is concerned that the “isolated island system” or IIS is “relatively small…approximately 1,700 megawatts”, with the majority of its load centered on the Avalon Peninsula. It states that the size of Muskrat Falls (824 megawatts) …”is large for the size of the IIS” which “presents challenges from a reliability perspective given the consequences of the instantaneous loss of the LIL” (Labrador Island Link) – precisely the concerns over which the small group of intervenors sought the PUB’s ear - over Nalcor’s objections.

Liberty points out that “outages cannot be completely avoided”.

Indeed, you may find the Consultant’s next comments disturbing. Liberty states:

“Reliability analyses completed by Hydro for the LIL indicate a probability of a full LIL outage every three years with an average duration of twenty-nine hours.” Hydro believes …customer outages will be limited to a few hours…” (but) “Liberty believes…that there will be more LIL …outages than estimated by Hydro”. (emphasis added)

Simply put, if there is not sufficient backup, there will be additional customer impact, including rotating outages. The capacity will have to come from “…new combustion turbines or firm, dependable capacity from Nova Scotia via the Maritime Link”, says the Consultancy.
Liberty recommends that Hydro secure the necessary capacity commitments to mitigate the consequences of an extended LIL bipole (full system) outage. Says Liberty:

“Extended LIL outages are possible, including failure of the overhead line (OHL). Although Hydro’s stated objective is to complete repairs for the overhead lines within two weeks, it is difficult to have confidence that two weeks is the maximum limit for an OHL-related outage, recognizing the magnitude of the challenge of repairing significant OHL damage in potentially extreme weather and in harsh terrain.” (emphasis added)

Liberty wants “…additional studies (to) be completed not only with the (Maritime) Link in service, but also with it out of service”. They acknowledge some of the questions critics of Muskrat have raised from the beginning – in particular, that “(o)n a bipole trip (a complete Labrador Island Link failure), Nova Scotia will have to replace the power it loses from Muskrat Falls and provide additional capacity for the IIS.”

Nalcor has never produced an agreement with Emera (which would likely require the approval of Nova Scotia’s UARB) how the ML will be “a source of dependable generation…”
even after Nova Scotia's coal fired generators are shut down. It need to do just that. This is hardly a minor loose end.

Liberty was charged with investigating issues of power reliability and security. In this Study it was not concerned with the cost of those installations.

Yet, Liberty has serious concerns about Nalcor’s outage claims. Its doubts that a bipole failure on the LIL can be repaired within two weeks. It claims that additional thermal generating capacity is necessary and that another deal with Emera must be entertained.

Taken together, Liberty has kicked the last leg, if any remains, out from under the idea Muskrat was a viable option - even as a secure supply - without refurbishing Holyrood, the very asset, Nalcor argued, it was designed to replace.

None of the “back-up” arrangements proposed by Liberty come for free.

As construction costs mount and consideration is finally given to the costs of insuring against a winter outage extending from twenty-nine hours to in excess of two weeks, we await another of Stan Marshall’s Ed Martin style revisions.

I wonder how many Liberty Reports it would take to convince Danny Williams Muskrat was a dog from the get-go? But, then, it was always all about Danny. Wasn't it?.