LeBLANC’S ADVICE TO BALL AND SIX OTHER TAKEAWAYS

The completion of testimony by Premier Dwight Ball on Friday, June 5th brought Phase II of the Muskrat Falls Inquiry to a close. His comments can easily be described as anti-climactic given the larger narrative that the Commissioner, Judge Richard LeBlanc, has heard. Yes, it was important to hear the Premier’s version of the events that led to Ed Martin’s departure as Nalcor CEO, and about the mess he faced having taken Office. But the Commissioner’s advice to the Premier at the end had far more relevance than anything Ball shared.

It wasn’t as if the Premier had had the intestinal fortitude to let Mr. Martin grovel in front of a Judge pleading for his severance package. Or even that his lack of forthrightness leaves us doubtful how both “ratepayers” and “taxpayers” will escape Muskrat’s underestimated and misunderstood financial burden.
That said, for all its shortcomings, Phase II Witnesses offered the public — if anyone was listening — significant insight into a megaproject ill-conceived from the start and as poorly managed as one might expect from a team of cronies. We heard lots about the Astaldi Contract and the problem of constructing the Labrador Island Link, largely absent geotechnical investigation. We also heard about lost notebooks and listened to plenty of forgetfulness. 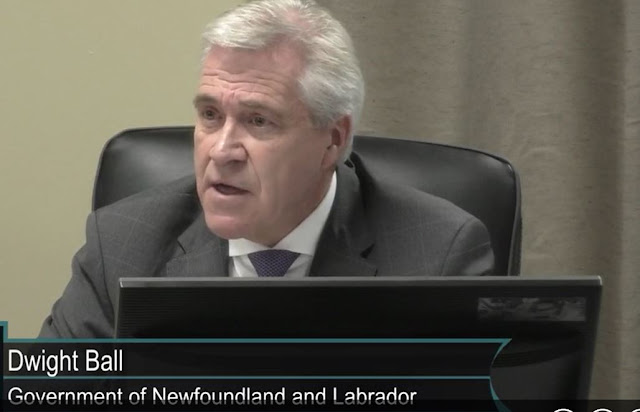 The larger narrative, however, was of a government that gave complete control of the public Treasury to Ed Martin. The Commissioner is likely to have a lot to say about the latter’s copious employment of the “commercial sensitivity” refrain, just as one hopes that he will be merciless with successive Premiers conflicted by the public interest and their own political self-interest.

Concerned about Nalcor’s lack of cooperation, EY, after having obtained evidence that the $7.65 billion project cost released in September 2015 was a fiction, suggested that the reasons given for 10 of 11 issues deemed “commercially sensitive” by Nalcor were bogus.

Indeed, if members of the public wanted to obtain a quick handle on Nalcor’s secrecy and lack of professionalism — and avoid the mind-numbingly poor recall and lack of knowledge of so many others — they might, accompanied by a large double-double, listen to the Examination of EY’s Michael Kennedy, in which he told his story of bureaucratic foot-dragging, complicity by the Oversight Committee, and the complete absence of political leadership at a very critical time.

That said, this item will not attempt to recast the 76 days of Hearings but will simply offer the most compelling takeaways from Phase II. Others may differ on the selection, but this is my take:

1. Confirmation that the Government was not informed at "Financial Close", November 2013 (when the conditions precedent were met allowing access to the Federal Loan Guarantee, at which time the Government could have paused or cancelled the project), that contract bid prices exceeded the amount budgeted by 25% or $600 million. The Bids exhausted a drastically understated Contingency Allowance and increased total project costs from $6.2B to $6.5B (plus financing) only four months after sanction! The Government and the public were not informed. At this point, Nalcor knew that the project was already suffering a delay of 6 months on a schedule given a 3% chance of succeeding by Westney, Nalcor’s Risk Consultant.

2. Confirmation that there were no Reviews conducted of the Project Estimates. Remember how Ed Martin used to say that the estimates and the business case were solid?

The Consulting Firm of Validation Estimating were engaged to review the cost estimates, but weren't allowed to finish the job after they raised questions about risk assessment. If any attestation to its lack of professionalism were needed, Nalcor used an out-of-context comment from Validation Estimating’s Draft Report to suggest that the estimates were “best in class”. The Firm’s Head, John Hollman, also called for a Risk Factor higher than P50, which would have raised Project Estimates at the start. No, Nalcor did not share that information either.

This testimony added to assertions that grew out of Phase I which revealed that Nalcor attempted to manipulate any negative feedback from ostensibly Independent Reports, most notably MHI (which neither assessed the Business case nor received the Westney Risk Report). The latter had recommended the inclusion of $500 million of Strategic Risk in the project estimates.

3. There were no checks and balances on Nalcor, and no Oversight role was played by Government. Neither prior to project sanction nor afterwards did the Finance Department undertake an analysis of the financial risk to the Province of the Muskrat Falls project. The Department of Natural Resources and the Executive Council were little more than conduits for Cabinet Papers in which Nalcor was seeking one formal Approval or another. The Reports claimed by former Premier Danny Williams to have been conducted were not found at the conclusion of Phase II either. Funny that!

Corroboration of the extent to which critical government departments were left out of the Muskrat decision was heard from one Deputy of Finance during Phase I and, during Phase II, from a second Finance Deputy and the Deputy Minister of Natural Resources along with the Clerk of the Executive Council, who served principally under Premier Dunderdale.

No senior bureaucrat stands in line for a leadership award on Muskrat. Rather they exemplify precisely how, in the British Parliamentary tradition, government bureaucracies (including senior officials) are not supposed to behave. Todd Stanley, a former Deputy of Justice, described — even if with some regret — that Nalcor had become a “runaway train”.

The Oversight Committee established by Tom Marshall was completely ineffective — a fact well-known when it was struck — based upon its bureaucratic composition and lack of power; matters confirmed by the Consulting Firm EY, hired to give it guidance and to perform the investigations. It was stone-walled by Nalcor, but the Oversight Committee deferred to Nalcor anyway. They relied solely on Nalcor for their data. Nalcor edited their Reports.

Even the so-called Independent Engineer, acknowledging that his was a perfunctory role, didn't perform a deep dive on any issue. The Provincial Government, having given the Government of Canada a “Completion Guarantee” for the project, was essentially treated by Nalcor as a blank cheque.

4. Ed Martin maintained tight rein on the release of financial information, including to the Nalcor Board of Directors and to the Provincial Government. (No evidence was given that any of Nalcor’s VPs had ever attempted to countermand Martin’s direction). Grant Thornton wrote in its Forensic Audit that Nalcor’s expenditure commitments often exceeded its own official forecasts described in the requests for the Board’s Approval for Expenditure (AFE).

Nalcor had the strangest way (more precisely described by Grant Thornton as contrary to “best practice”) of accounting for cost overruns: it didn't update its forecasts until the cost overruns were actually booked, when most (normal) companies use the results of Bids, trending of costs, and Quantitative Risk Analysis performed by Consultants, like Westney, schooled in the science.

Nalcor did not provide timely information to the Government of Canada or the Independent Engineer, either. The Inquiry heard evidence that Nalcor was threatened by the Federal Government’s lawyer that payments under the Federal Loan Guarantee (FLG) would be cut off if more timely financial information wasn't forthcoming.

5. As reported in a June 17th Blog Post entitled Paul Davis Kept Lid on Release of Cost OverrunsPrior to 2015 General Election, EY, the Firm hired to assist the Oversight Committee, confirmed that the $7.65 billion project cost, released in September 2015, was underestimated. While Nalcor and the Oversight Committee played “footsie” over its claims of “commercial sensitivity”, going so far as to bifurcate the Report in order to isolate the ostensibly more sensitive parts, neither Report was released until after the General Election — held November 30, 2015. Undoubtedly, some partisans will think this decision astute.

6. Stand Marshall's objective — to “Finish Strong” — is in grave doubt, and not just due to GE Alstrom’s lack of readiness with the software required to run the power capacity of Muskrat through the Labrador Island Link.

Although Stan showed up at the Inquiry regaling the Commissioner with his characteristic bluster, no one could mistake victory’s impossibility.

No good choices survived Ed Martin, and Marshall didn’t exactly arrive at Nalcor accompanied by an international skill-set or brilliant ideas. His singular management change was to bifurcate the project. Though it was wise to give Gilbert Bennett less to do, the decision to keep Astaldi around, or any of the Project Management Team, was questionable. He had given the Italian connection an $800 million settlement in 2016, only to see the Company kicked off the site in 2018. Another arbitration of similar size is now underway threatening, in the process, the current $12.8 billion price tag for the project. “Finish Strong" may best be a boast kept within the sphere of personal training outfits like New World Fitness!

7. As noted, the Commissioner’s advice to the Premier outweighed anything Ball had to say. While, for reasons known only to him, Stan Marshall believes that we can trust Nalcor, the Commissioner, on the other hand, is more sceptical. Though the Premier awaits a Report from the PUB on rate mitigation, the Commissioner noted that while he was not “suggesting malfeasance by anyone,” he would like to see the costs tied to the Muskrat Falls project (including maintenance and operating costs) stated by Nalcor to receive independent review.

Stated the Commissioner: “I do believe the ratepayer of the province deserves some form of oversight with regard to the calculation of those costs that are basically going to form that [guaranteed] stream of revenue” required from ratepayers.

Of course, the Commissioner didn’t need to tip his hand as to what his Report might contain. Deception on a massive scale is a theme that has permeated the Inquiry like a noxious odour. Based on the PUB’s Interim Report there is evidence that it has been far too reliant on Nalcor for its data. The PUB’s Final Report on Rate Mitigation will be worth little if this situation persists.

PUB: are you listening?