IN NALCOR WE TRUST

Oversight is one of those complex words in the English language, an auto-antonym, a word having multiple definitions which are opposite in intent.  Oversight can be defined as either (i) the action of overseeing something or (ii) the unintentional failure to notice or do something.

Is there no better word to describe the current government committee which is entrusted with overseeing the giant Muskrat Falls project?

Originally, the Oversight Committee was formed by government to strengthen and formalize existing oversight of the Muskrat Falls Project. It was mandated to provide reliable and transparent oversight so that the public could have confidence in the management of project costs, schedule and risk.  Premier Marshall was clear in this intent when he originally announced the formation of the committee in March of 2014:

"We're listening. We're hearing what people have to say," he said. “It is a big project. It’s the people’s project. We sense that the people want to have more information, they want more oversight, and that’s what they’re doing.”

First of all, I believe the provincial government should be commended for releasing this update on the project schedule, project costs, and major risks.  Although the report does fall short of the content originally envisioned by Premier Tom Marshall  it does provide the reader a snapshot of the project progress, with good narrative, on the challenges facing the project team.

The general observations made in the most recent report include:

·         Project Capital Budget of 6.99 Billion remains unchanged
·         Critical Path to First power in 2017 remains unchanged
·         No changes to the forecast milestone schedule in the current quarter.
·        There are schedule challenges, with production improvements will be required at the Muskrat Falls Site to maintain critical path.
·       Actual construction progress is 23% complete compared to the planned     progress of 25.7, a variance of 2.7 percent

With a first read of the report it looks as if the Committee has fulfilled their mandate of “overseeing” the project.  However, it is clear that the schedule slippage on the Muskrat Falls generating facility is a primary concern, and there are several pages of the report (16, 17) that highlight slippage on this portion of the project.  The Oversight Committee queried Nalcor on the project's biggest risk, the lack of progress by the main contractor, Astaldi.

Nalcor’s answers about management reorganization and schedule recovery plans provide insight into the significance of the productivity problems apparent on site.  There seems to be general agreement that the recovery plans will allow the schedule to remain unchanged and, likewise, minimal impact to the project capital budget.

THE SNOW JOB (PART I)

The question must be asked: is the Oversight Committee committing an “oversight” in believing Nalcor’s management?  Has the Committee probed far enough into the project schedule, labour productivity ratios, and historical performance on the site to truly challenge Nalcor’s claim that a recovery is possible?

Hydroelectric developments of this scale are complex, integrated projects which have a well-documented track record of delay.  The Oxford Paper released in 2014 identified 8 out of every 10 dams experience a schedule over-run with the median delay being 1.7 years.   Armed with the knowledge provided in this paper the Oversight Committee would be wise to challenge Nalcor in a more aggressive manner or, at least, provide the public a more candid narrative of the project performance to date.

In July 2013, and after project sanctioning, Nalcor provided a baseline schedule  for the development of the project.  This schedule is summarized within Appendix K of the November 2013 Independent Engineer's Report.  In July of 2013 Nalcor anticipated the completion of the spillway structures by Q3 of 2014. 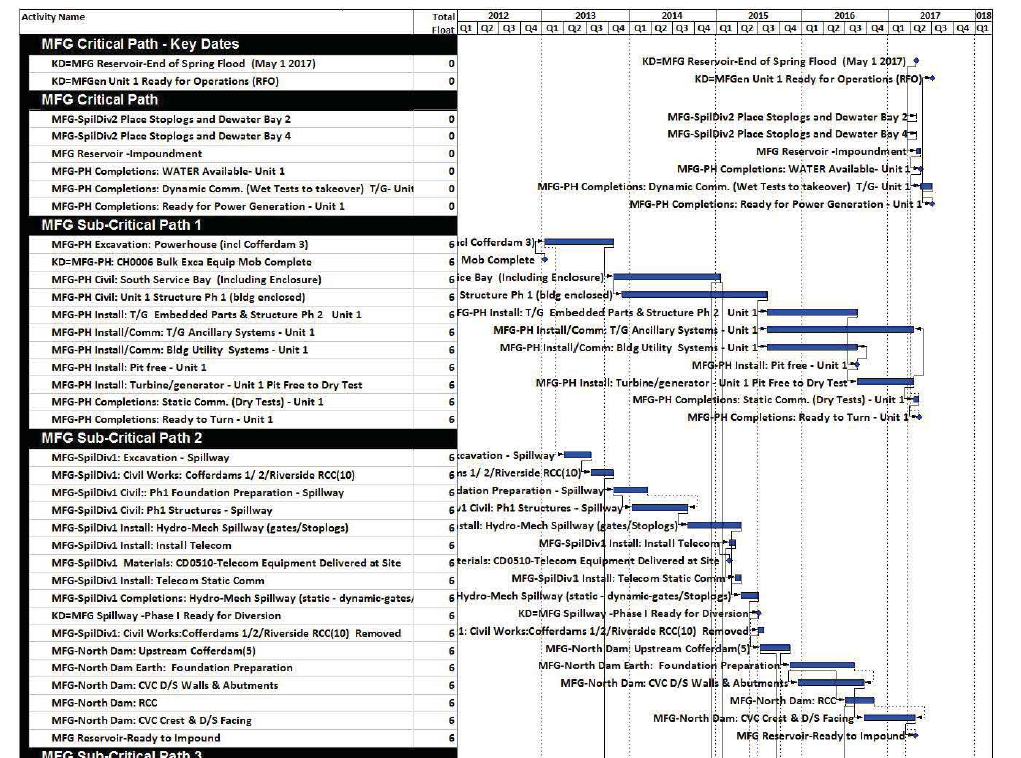 However, due to delays in awarding the contract to Astaldi, and further delays in mobilizing the contractor to site, there was at least 6 months delay to the above schedule.  This problem was recognized by Nalcor in June of 2014.  At that time the project costs were updated and the schedule re-baselined.  It is also when Nalcor advised that first power had slipped to Q4-2017.

The schedule progress now reported by the Oversight Committee is compared not to the project schedule at project sanction, nor to the one issued in July 2013, but presumably to the revised schedule re-baselined in June 2014.  It is worth reviewing the most recent progress of Nalcor when compared to what they predicted in June of 2014.  The actual progress, as documented within the committee reports, are provided in the following table:

On Page 15 of the December report, the committee concludes: “As of the end of December 2014, the actual construction progress for the generating facility was 25.6 per cent complete as compared to a planned progress of 31.3 per cent complete, a variance of 5.7 per cent behind the planned schedule”. This statement is highly misleading.

In reality, in Q4-2014 Nalcor achieved only 2.3% of the planned 6.2% of progress.  This works out to achieving only 37% of what they thought they would when they re-baselined the schedule in June 2014!

When you look at the delays experienced by Nalcor prior to awarding the contract to Astaldi, and poor schedule performance in the first year of the contract, it is clear that this project is having significant schedule pressures.  It must be asked: is it reasonable to assume that Nalcor will be able to implement a recovery plan which protects the project milestones of first power Q4-2017, and the project budget of 7.0 billion?

Irrespective of what Nalcor say they can accomplish, are they actually able to do it?

The Oversight Committee should fulfil their primary objective to provide reliable and transparent oversight on the costs and schedule performance of the Project. To do this they must access and report to the public the information which was requested by Tom Marshall in his July 29, 2014 letter to Nalcor CEO, Ed Martin. Specifically the oversight committee must have access to the performance graph and the trend forecast to determine if the forecasted schedule and costs are reasonable, and determine if they should be adjusted based on the actual efficiency experience at site.

It is not clear to the reader how delays such as those reported in Q3/Q4 in 2014 could not have an adverse effect on the overall project schedule or budget.

What is even more disconcerting, though, is that the person the Oversight Committee reports to, Natural Resources Minister Derek Dalley, was not able to answer the most basic of questions, in the House of Assembly. During the March 18th Question Period Dwight Ball asked whether it was Astaldi or Nalcor that is responsible for the costs associated with the delay.  The Minister did not know the status of the largest contract on the project. He did not know whether the contract was lump sum or reimbursable.

The Minister’s detachment raises basic questions, too: what is the government doing with the information provided by the Oversight Committee?  Has the Government actually demanded proactive measures such as the changing of Astaldi’s management? Or, is this Oversight Committee merely a check in the box, to pacify a public tired of government secrecy?

The inability of the Natural Resources Minister to answer the most basic question, on the biggest contract, on his biggest file suggests that he is indifferent to the content of Oversight Committee reports.  Minister Dalley has put his blind trust in Nalcor, but the public should not.  The public should demand to see documentary evidence of a recovery plan to maintain schedules.  The oversight committee should insists on a true third party challenge of the schedule.  The PUB should require real evidence that Muskrat Falls Power will be ready by the winter of 2018/2019.

I do not blame Nalcor for this delay.  This is normal in large and complex mega projects.  It is also being experienced on other major projects such as Hebron.

What I cannot defend are the decisions made by Nalcor and the provincial government in 2012 and 2013 to sanction the project in it’s current form, and commit the taxpayers of the province to an $8 billion dollar expenditure.  These decisions were made with great assurances about the robustness of the schedule and cost estimates.  The decision-makers suffered from optimism bias. They sold the people of the province on their ability to deliver on those unsound assurances.

Real public oversight has been missing on this project since its inception.

"JM" is the anonymous researcher and writer who presented a major Paper to the PUB Review during the Muskrat Falls Review.  He has written a number of articles for Uncle Gnarley Blog; three are highlighted in the above item.  Others include Gnarley's Theory of Political Devolution, and
The Great Revolutionary From The Shore. Readers are also invited to review major Papers on the Muskrat Falls project listed on The Sir Robert Bond Papers Blog by Ed Hollett.