Earle McCurdy is out of retirement; I don’t think anyone will envy him his new job.

The position which the NDP finds itself is reflected in the most recent CRA Poll which gives the Party 13%; Abacus reports 9%.  McCurdy had better have a new plan; the numbers are proof it will be tough to get more than one or two Members re-elected. Impending boundary changes won’t help.

Like the Tories, the NDP risks being steam-rolled by a Liberal juggernaut as default to that Party is the public’s only option.

McCurdy is intelligent, experienced, and offers management, strategic, and organizational skills.  He is well suited to the job.  The bigger question is whether his world-view has been jaded by too many fish fights with the private sector and with government. Does he possesses a renewal mind-set; one that will put claim to a new NDP political model to replace one most certainly broken?

McCurdy does not have a lot of time to prescribe a makeover.

Yet, the current political environment is fertile, a fact illuminated by the Tories' unspeakable incompetence.

On the other hand, the Liberal Party has been coasting, grabbing the disaffected from both the NDP and the Tories, showing no leadership in return.

The NDP has been incapable of filling that leadership void.

Yes, Chris Mitchelmore and Dale Kirby bolted, speeding the Party’s unwinding, but it suffers a larger arterial constriction than the one those two represent.

To begin with, the last election was an anomaly; a skilful Lorraine Michael levered the star power of Jack Layton.

Thomas Mulcair is no “Jack”.  Those warm winds have dissipated leaving the NDP as vulnerable as it ever was.

The Party is shackled to every social interest group imaginable; few, except organized labour, are large enough to be a source of candidates, money, or grass roots support. Labour cannot perform the role, even when it feigns interest. Union members simply do not define their own political, economic and social interests as labour describes them, magnifying the NDP’s irrelevance.

No party can do without a social policy platform. But the NDP is far too ready to embrace any new cause or social program, even if it only makes sense within a fiscal framework designed in Greece.

When the Tories ran huge deficits, in a period of the highest revenues ever recorded, the NDP’s rallying cry was: we want Government to spend even more!

The Caucus could not even formulate opposition to Muskrat, which constitutes a threat to workers and programs, alike. The Liberals didn’t either, but no one suggests their popularity has anything to do with being smart.  The NDP is simply judged more harshly; penalized for its lack of success and a platform incomplete. 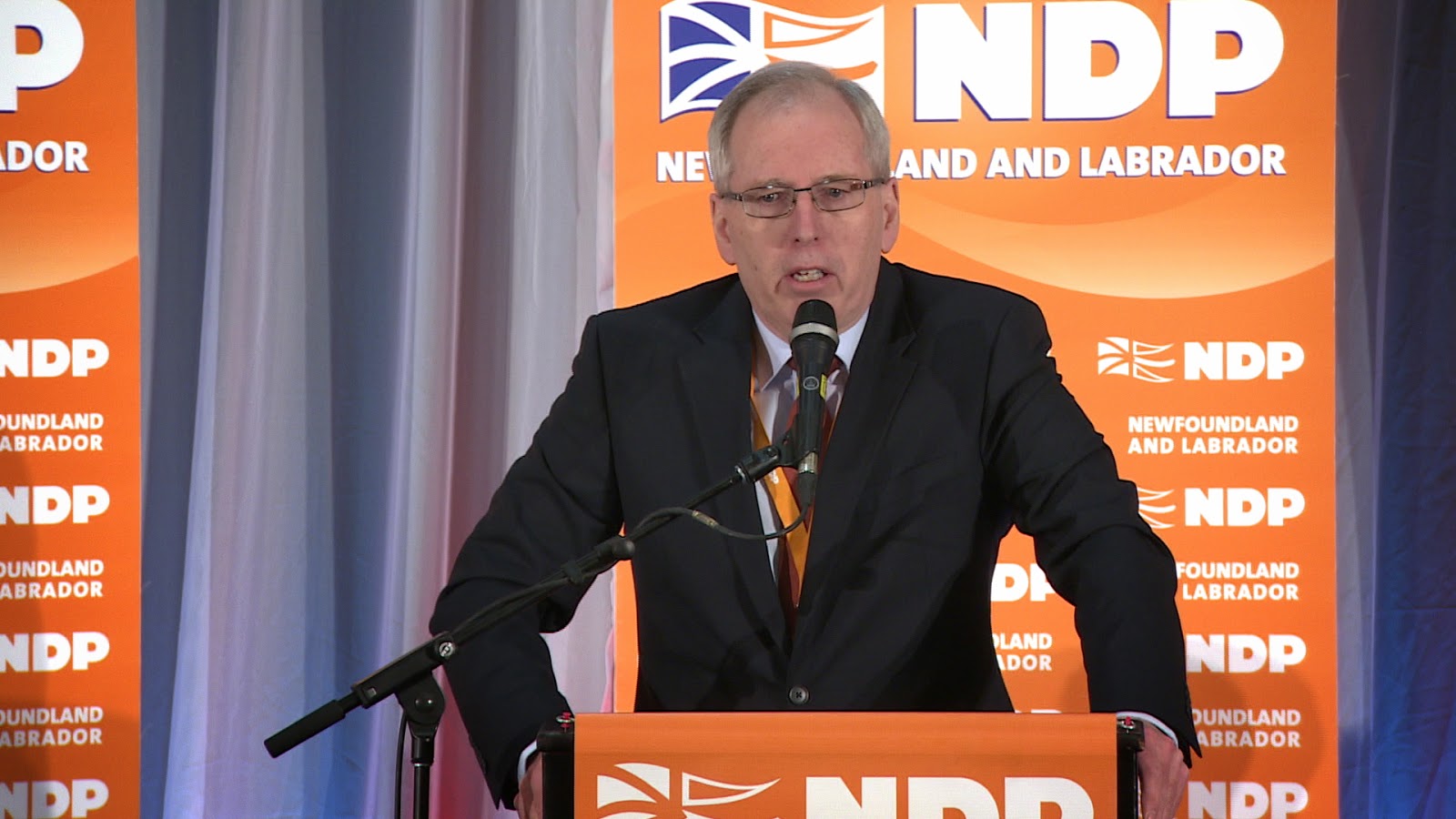 McCurdy can correct this image; one that now defines the NDP more as advocacy group than political party.

A swift repair is to immediately declare himself a fiscal hawk.  He should promise to balance the Budget during his first term of office and during every term the NDP is in power! He should take the lead in re-defining politics as the “art of the possible”; declaring it, instead, a “symmetry of tough choices”. Who would lose sleep worrying the NDP might re-arrange priorities if it commits to not breaking the bank? A former Treasurer of the FFAW, McCurdy might just find the idea an acceptable remedy for stroppy voters.

Politics is merciless; but only because it contains the genetic structure of public self-interest. For that reason, the NDP should know it will never get a free ride.

Some point to NDP Governments in Nova Scotia, Saskatchewan and Manitoba, as if their history manifests an ability to govern here.  That is an indulgence. No one gets to the podium with another’s medal.

Can Earle McCurdy re-define the NDP helping it secure credibility and legitimacy, without which it is doomed? Is he capable of the pragmatism demanded of successful political parties?

McCurdy doesn’t strike me as an ideologue. Indeed, the FFAW found a way to operate training and other programs using funding from the government, with which it is frequently at odds.  Its ability to satisfy competing interests between inshore and large boat fishers, often satisfying neither, also suggests uncommon pragmatism; one that doesn’t let a larger objective become obscured by the thousand voices counselling a different path.

In addition, NDP adherents are tired of the political wilderness. Likely, given his strong union pedigree, they trust McCurdy enough to make essential changes without risking the total loss of its social democratic footprint.

A better question is: can McCurdy see beyond the detritus of failure, risk alienating a few stalwarts, as a “new” NDP rescues the “old” from demise?

The choice is stark: no one is proposing a glimpse at greatness anytime soon;this narrative is about survival.

McCurdy needs no advice about funding, organization and the dangers of expecting progress too quickly. Most immediately, he will be challenged by the reality the NDP is confined largely to a couple of townie enclaves while rural, the cultural home of fish union central, of fish mongers and fish merchants, may as well be a million miles away. Townies are consumed with oil; there is no discipline and less leadership here. People have only the markets to remind them fish has sustained this place for 500 years.

I am sure Ed Martin is anxious to greet him; but McCurdy should first decide if Martin is a liability, a soul mate to the NDP’s image of excess, or whether the Party’s new direction makes Martin a pariah who should go when the Tories are pushed. Either way, he should sew up his pockets before he visits Nalcor.

Finally, the NDP’s political enemy is Dwight Ball, not the Tory Party. Ball has been allowed to enjoy a perch that is unseemly in a competitive and partisan political arena.  Davis gave him a bloody nose on the Electoral Boundary issue, which exposed Ball’s (striking) limitations.

McCurdy needs to rough up both of them, especially Ball – because Davis is finished.

Ball needs to be dragged kicking and screaming into the open. A fellow unwilling to take a position on virtually anything, is fair game in the brutal world McCurdy has joined. Unless I overrate McCurdy, he should be able to inflict some serious lacerations on Ball - but he will succeed only if he has something new to say.

Yet, if he approaches the fight using the same ineffective and out-dated political tool kit carried by his predecessors for years, he can retire again; no one will have noticed that he either came or went.
Posted by Des Sullivan at Monday, March 16, 2015