The attempt to bring some clarity to the North Spur landslide issue seems to be making headway – if in a very disturbing way.

Attached is a letter from Minister Dan Crummell (Minister responsible for Dam Safety) dated August 26, 2015 in answer to my letter to him of August 7,2015 together with my reply of September 11, 2015 to the Minister's latest letter. (Both letters are shown below.)

While this letter exchange with the Minister involves some pretty technical matters, this should not deflect us from the conclusion that an independent, engineering-based and technically competent review is needed. My latest letter closes with a call for a “Hydro Review Board” that would do just that.

That such a Board can, even at this late date, “add value” can be illustrated by the major issues that arise from the Minister’s latest letter and the findings of the recent, long-called for, North Spur Dam Break Analysis.

According to the Hatch Consultants June 26,2015 North Spur Dam Break Analysis, the gap in the North Spur upon failure would be 600 m long and, as the Minister now admits, such failure  “ may indeed increase in depth below an elevation of 10 m” – a point that hydro expert Jim Gordon made in a previous piece on Uncle Gnarley.

The creation of such a deep and wide gap alone would be bad enough as it would result in the creation of a brand new Lower Churchill river course on the north side of Spirit Mountain, leaving all Muskrat Falls generating assets currently under construction high and dry and of no economic value; our billions of dollars of investment would simply evaporate.

But this would be just the start in a predictable chain of events, for:

“… should the North Spur fail, the erosion cut will remove all support that the North Spur currently provides to the very large sensitive clay deposit on the North Bank and its adjacent upslope area, exposing the bank to a massive landslide likely to engulf the powerhouse on the south bank, and cause a large tsunami wave moving rapidly downstream to inundate Goose Bay and Happy Valley.”

The newly exposed and highly unstable stretch of north side riverbank would rise some 150 to 200 feet high and stretch about a kilometer in length leaving lots of potential for both “retrogressive” slides that start at the river bank and even larger Downhill Progressive Slides that would be initiated far upslope as postulated by Dr. Bernander.

It is inexplicable why Nalcor has not, and does not, consider these two issues to be major project risks.

Such a situation clearly makes the case for the immediate creation of a “Hydro Review Board”. 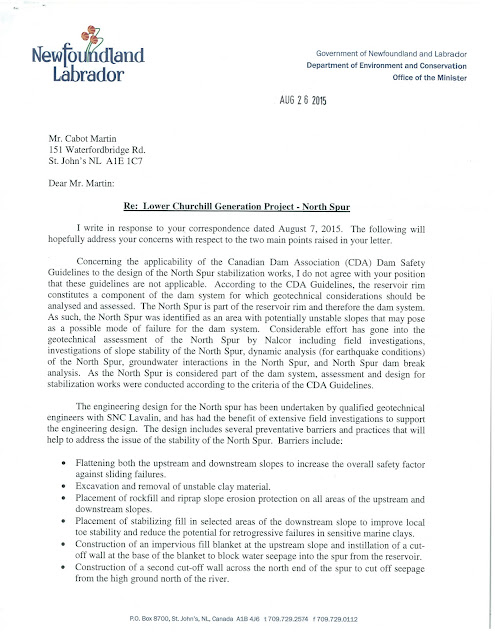 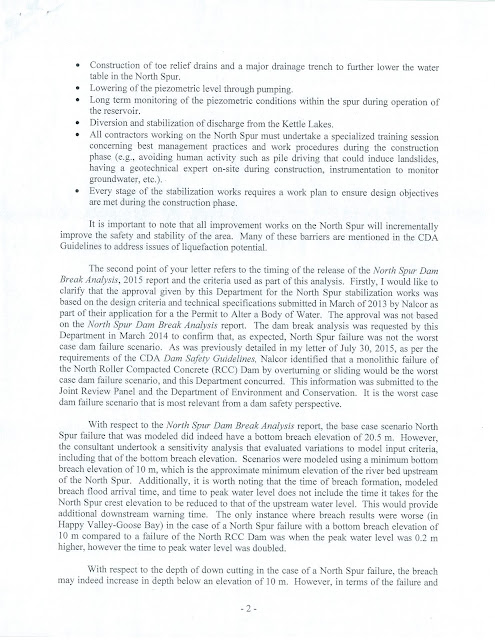 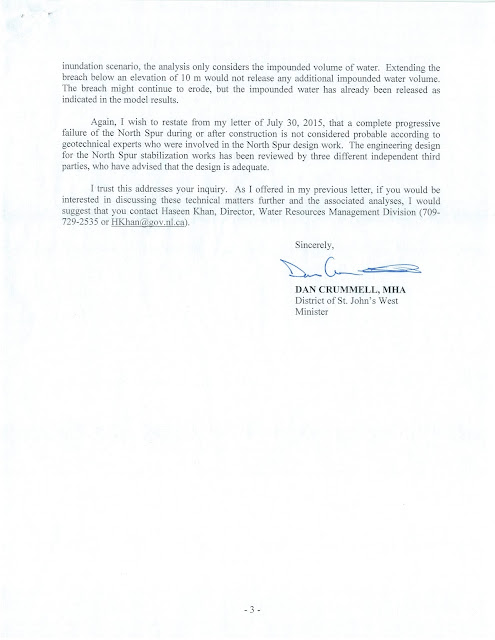 I have responded to the Minister with the letter shown below:

Thank you for your letter of August 26, 2015 in response to my letter of August 7, 2015 concerning the North Spur stability problem at the Muskrat Falls hydro project on the Lower Churchill River in Central Labrador.

On a technical but important point I should point out that your reference on page 1 to “sensitive marine clays” should properly state “sensitive glacio-marine clays” as it is the latter class of particularly sensitive clays that are present at the North Spur and it’s adjacent up slope area.

I note that at page 2 of your letter, you state that Nalcor plans to avoid “human activity such as pile driving that could induce landslides “by which I assume that all parties now apparently understand how risky the situation at the North Spur really is.

In the second paragraph of you letter, you emphasize that the geotechnical investigations have been undertaken according the CSA guidelines. Also you have acknowledged that the North Spur is part of the reservoir containment structures. This is correct. However, the North Spur “dam” will contain quick “marine” clay, a very unstable material, and the CSA guidelines do not cover such a structure for the reason that no such structure has ever been built which includes quick clay within the dam structure.

This basic non- applicability of the CDA Guidelines is not offset by characterizing  the kilometer long 50 m high North Spur  as a “reservoir rim”; and I should say that in any event the North Spur constitutes 50% in length of the entire Muskrat Falls reservoir

In the third to fifth paragraphs, you outline the measures that will be taken to improve the safety of the Spur dam. The question is will they be sufficient? For example:-
·         Will all the sensitive clay be removed? Or will the clay removal be confined to certain areas.
·         Will there be a backup to the cut-off wall? Cement-bentonite sand cut-off walls are very difficult to construct with 100% impermeability. They usually contain several permeable holes formed during the backfill process when sand sloughs off the vertical wall. A backup usually consists of grouting or an upstream blanket.
·         Will the cut-off wall be excavated through sensitive clay? – A difficult task.
·         Are the lower slopes of the dam sufficiently flat to distribute the load onto the lower quick clay?

In your 6th paragraph, you mention that the North Spur dam break is not the worst case scenario in regard to downstream impacts. This point is debatable. The warning time for a “slow erosion” North Spur break may well be significantly longer that for the concrete dam break.

However, this does not take into account that should the North Spur fail, the erosion cut will remove all support that the North Spur currently provides to the very large sensitive clay deposit on the North Bank and its adjacent upslope area, exposing the bank to a massive landslide likely to engulf the powerhouse on the south bank, and cause a large tsunami wave moving rapidly downstream to inundate Goose Bay and Happy Valley.

These concerns are heightened by the potential in this area for Downhill Progressive Landslides as described by Dr. Bernander.

In your 7th paragraph, you assert that my breach assumptions were incorrect, since they did not take into account the cement-bentonite-sand cut-off wall halting the

downward erosion of the breach. This is partially correct. However, the cement-bentonite-sand wall will only provide a temporarily non-erodible surface, eventually crumbling when the downstream material erodes out, removing support for the wall. The result will be a “slow” erosion down to about or below sea level. The warning time for Happy Valley - Goose Bay – Mud Lake in such a “slow erosion” case may well be significantly longer than that for the concrete dam break case.

However, even the “slow erosion” case constitutes a very significant project risk that must be considered.

I have been informed by an experienced hydro engineer that the consequences of a North Spur failure, “from a financial perspective would be unimaginably catastrophic due to the very large expenditure required for a repair due to erosion of the Spur clay foundation down to below sea level. …” … “The cost would be so high, that a more economical alternative would likely be to abandon the site and spend the repair moneys on a re-design and construction of the Gull Island Dam, taking advantage of the lower tailwater level resulting from a dam break in the North Spur to increase the capacity.”

Turning now to your second last paragraph wherein you state that – “The engineering design for the North Spur stabilization works has been reviewed by three different independent third parties, who have advised that the design is adequate”.
I cannot find any corroboration for this statement and would appreciate being directed to where I might find a public source for such opinions.
The Muskrat Development is being built without an independent “Review Board”. This is unusual, since most large hydro projects have review boards to ensure that all aspects have been foreseen. Moreover, the North Spur has unique challenges with a dam being built on a quick clay foundation, with quick clay included within the dam structure.
An independent Review Board should be immediately appointed comprising the most qualified engineers with experience in soft clays. To my knowledge these would be Dr. S. Bernander, and Professor (retired) N. Morgenstern who recently served as Chair of the Panel investigating the failed Mount Polly Dam – it was found to be due to an undetected layer of soft clay below the dam.

In closing, I urge you to immediately advocate within cabinet and generally support the establishment of such a Hydro Review Board.
Sincerely,