A new portfolio awaits Finance Minister Cathy Bennett — assuming she doesn’t quit first, or refuse a demotion. Liberal Party insiders report that Premier Ball’s next Cabinet shuffle will see a new face in the Government’s most important and prestigious Ministry.

Why is the writing on the wall for Bennett?

To begin with, the rules of politics are simply against her. But, in addition, Bennett has not demonstrated either the heft or the skilful art of politics essential to survival in a time of great crisis. Besides, in full public view, the Premier has told the Minster to take her fiscal plan and stuff it!


A weak and vacillating Premier has discovered he is unpopular. The rulebook demands that someone — other than the Premier — is blamed.  Giving the matter additional urgency is that a few people from inside the Caucus, and at least one from outside, want his job.

In theory, the Premier can replace a Minister whenever he chooses. But, in practice, taking such a step so early in the mandate, affecting such a high-profile Minister and poster-girl for the Party, can occur only if the Government is in trouble, if the Minister is at loggerheads with the First Minister, or because the Minister’s poor rapport with Caucus, and her policy direction, has them screaming for her head.

All of those reasons apply to this Finance Minister, further confirming that she is on the way out.

The Premier has been a reluctant bridegroom on the Finance Minister’s proposals to deal with the fiscal nightmare. Demonstrating an almost puerile appreciation of public expectation, Ball embraced her collection of new taxation schemes rather than opt to reduce public service bloat. He can now see that the Minister was a neophyte strategist, and even greener when it came to selling the public on matters fiscal. 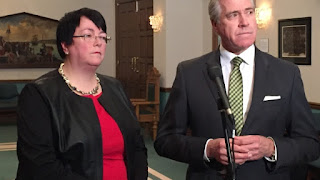 In short, Bennett lacked a steady hand. It is true that she was absent a First Minister capable of rescuing her from a financial “Plan” devoid of context let alone hope. But she willingly chose to go along with Ball’s “Hush Puppy” approach to laying blame for the mess at the feet of the Tories. She wasted a province-wide consultation process, using up precious months to invite ideas for savings, accomplishing nothing more than allowing Ball deference to dither. In the end the public, for all intents and purposes, was left out of the process.

While Ball is equally to blame — along with the Minister of Public Engagement, Siobhan Coady — it is Bennett who will take the hit for what has occurred to the Liberal Party’s fortunes. A savvy Minister would have put her foot down at the start. Knowing, as she should have, that bringing off a more focussed and sensible plan would have still been a tough slog, one with buckshot aim was sure to get everyone’s dander up.

Discounted, too, was an increasingly awakened public, following the imposition of the levy and Stan Marshall’s single outburst of truth — the “boondoggle” at Muskrat. Some of the Minister’s initiatives were plainly dumb — like closing community libraries to save pocket change — and the course was reversed only when most of the political damage to the Liberal brand had been done.

A neophyte politician, over-confident and relying upon a shrewdness she did not actually possess, kept no bag of tricks in reserve, except the assurance that the Liberal Caucus would spend their entire first term in a political grinder.

Ball has earned the moniker “ditherer”. Insiders freely acknowledge that the Premier’s “in” basket remains a convenient resting place for decisions which will never see the light of day. But notwithstanding such dysfunction, having watched the Premier ignore her and the advice of her Department — from the get-go — a skilful Cabinet Minister would have made sure that she wasn’t swimming solo. A savvy Minister would have known the piranhas in the Caucus simply by their name tags.

Liberals are aghast — nay, furious — that the Party is in a race to the bottom of public opinion polls, as the Tories are given a free ride. That Tory Leader Paul Davis feels unhindered from another run in the next election is, alone, indicative of how poorly the Liberals have managed their first year in Government.

Then, too, the Premier is trailing his own Party in the Polls. Ball’s 17% voter satisfaction rating stands against the Liberal Party’s 34%. Even the Tories still picked up the support of 33% of voters — a group that, by now, should have been driven out of town!

As payback for such failure, the Liberal Caucus would love to throw the Premier to the wolves at this fall’s Liberal Convention. But that decision would trigger an election within a year of Ball having been replaced. (A real Premier would have discarded all the phony electoral reforms of the Williams era as the Government’s very first legislative measure.)

The Liberal Caucus understands self-preservation far more than it does good fiscal management. Of course, they are on the front-lines. All that MHAs hear is kickback from their constituents over the levy and over a plethora of other issues, too.

Aside from the Polls, what bothers them most is their embarrassment over Ball’s unwillingness to demonstrate even a smidgen of moxie. They have put the Premier on a very short leash.

The impending departure of the Finance Minister will constitute Ball’s first signal — to the Caucus — that he is willing to change and that he has their back.

There will be no repercussions over Bennett’s departure. From day one this Minister has isolated herself, not just from the Premier’s Office but from her Cabinet and backbench colleagues too. She will be easy pickings for a Premier preoccupied with his own political survival.

More problematic for Ball, however, is that there is no one in the Liberal Caucus with a decent finance or senior business background; hence, he will be forced to choose an even poorer amateur to speak for a province on its fiscal knees. Secondly, though Bennett spoke to the detail of what the fall Budget might accomplish, Ball is also associated with last April’s disclosure of the “mini-Budget”.

After two days of Cabinet Meetings at the Rooms on July 28th, he declared that the mini-budget was not off the table. According to the CBC, the Premier said: “There's no date yet for the supplemental budget this fall.”

It wasn’t until September 6th that VOCM News, among other media outlets, reported that the “provincial government is changing its tune on what was originally being billed as a mini-budget…”

According to the story, Premier Dwight Ball “is no longer calling it a mini-budget. He now says a fiscal update is expected sometime this fall.” It continued: “He says fiscal responsibility is not just about cuts, but about doing things responsibly.”

Confronted by the disastrous Poll results, the Premier at least understands his tenuous hold on power amidst a Liberal Caucus ready for revolt. Ball is ready to make at least one decision that just might begin to disassociate him from so many poor judgments.

A Minister serves at the pleasure of the First Minister. Hence an unpopular Premier,
one under extreme pressure from his Caucus and facing a fall Liberal Convention that promises to be as exciting as a wake, has to find a way to change the political narrative.

There is no solution anywhere in this equation for a province in deep financial distress. And only a temporary one for the Liberal Party.

If she was politically astute, she would leave before she is pushed.


But why should we expect her to demonstrate such cleverness now?
Posted by Des Sullivan at Monday, September 19, 2016