"Falsification of information on a massive scale.” That’s what the Anonymous Engineer told the Uncle Gnarley Blog in January, 2017 about the estimates for the Muskrat Falls project.


The public now awaits follow through by the Premier and the Minister of Natural Resources on his call for a forensic audit. The audit would detail the origins and extent of the “low-balled” estimates and confirm whose signature(s) authorized their use.


In a conversation with him recently, the engineer reflected upon his disclosure and the response of the Government. Said he:


“Even though Minister Siobhan Coady has already indicated she accepts what I have said as part of the narrative and that she has questions, too, the Minister must know my warning was completely supported by the EY Interim Report, which the Government commissioned.”


“Essentially she had the same information nine months before I spoke out on why Muskrat was failing so badly. And EY actually said a great deal in what was just a preliminary report…the proof is all there…it needs only the forensic audit to confirm time-lines, how the detailed estimates evolved, and who signed off at each stage. But the outlines of the low-balled estimates are there. Read the EY Interim Report and you’ll see how deeply concerned EY was over the $7.65 billion forecast that Ed Martin announced in September, 2015 which EY termed “not reasonable.””


Of course, the Nalcor whistleblower was correct.


Following his advice, I again reviewed the document EY gave the Ball Government on April 8, 2016.


Its principal conclusions are well worth noting:


The Report also noted that the all-important Schedules had not been updated in three years.


They were exactly the observations which the Anonymous Engineer discussed with me back in January 2017, and more recently with CBC’s Anthony Germain. They constitute part – but only a part – of the basis for having called Nalcor public utterances "Falsification of information on a massive scale.”


A couple of points need illumination. 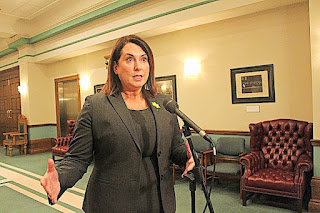 The Premier and the Minister would have received a verbal Briefing from EY and possibly other documentation, too that was not available to the public. They would have been informed by April 8th, 2016 – likely earlier – that something was seriously amiss at Nalcor.


Ed Martin left the Nalcor CEO Post on April 20th. Stan Marshall was introduced by the Premier the following day, telling the media he was “deeply troubled” by the delays and cost overruns.


A key limitation on EY was that the Consultancy did not have a mandate to review or investigate the development and approval of the alleged $6.2B fake estimate used to obtain project sanction.

In his recent CBC interview, Stan Marshall added what EY did not: "The estimate was way, way too low. They would have never built it for that price."


Commenting on Marshall’s remark the anonymous engineer suggests “estimates are not catastrophically low due to a mistake by a junior employee. They are low by policy, design, intent, and decisions made at the highest level in the organization.”


Nevertheless, the EY Interim Report served a second function beyond even its explicit warning that project costs would dramatically increase.
In essence, EY had readied Ball and Coady for the statements of the anonymous engineer. When he made his allegations they had heard much of it before!


The anonymous engineer is careful to repeat his very simple message: “the cause of the falsification reported on the Muskrat Falls project can be established only through a Forensic Audit.”


The Government – the Premier and the Minister of Natural Resources, owe an explanation to the people of Newfoundland and Labrador of their long long silence  As the Minister said, the people need to know, and she needs to know.


The only way to know is to initiate a Forensic Audit.
Posted by Des Sullivan at Thursday, June 08, 2017