THE END OF THE BEGINNING FOR MUSKRAT FALLS

Monday, July 22, 2013 will go down in infamy as the date on which the wheels finally began coming off the Muskrat Falls Project.


Some would rightfully argue that the wheels, on this Project, were never properly attached anyway. Who, except Kathy Dunderdale, Ed Martin, Jerome Kennedy and Cathy Bennett would disagree.


Likely, at this very moment, the Dunderdale crowd, in Confederation Building, are enjoying the relaxation of summer; the House of Assembly is closed, Ministers are off to their country places and the oppressive heat, wrought by an angry public and pesky Pollsters, is a distant memory for a battle weary Government.  I doubt that a single one of them appreciate that the Dunderdale train just got side tracked and is now hanging over a very steep political and financial precipice.
Ed Martin, the stone-faced Chairman and CEO of Nalcor, is probably slightly more conscious than the Premier.  Martin had not received knowledge of Hydro Quebec’s decision to refer the Water Management Agreement to the Quebec Court, until just before he entered the news conference, on the Nova Scotia Utility and Rate Review Board (UARB) Decision. The news must have been a devastating blow to one who, for more than two years, has been playing a high-stakes game of Russian roulette with public money.  Two successive bullets were fired, on Monday, from “guns”, the Nalcor Conductor was frequently warned about!


Nevertheless, it is not Ed Martin’s bruised ego that should give us pause.  Martin put the best 'spin' he could have  on a very bad decision, for Nalcor.  More importantly, this day of ‘infamy’ is merely an affirmation that the poor taxpayers, of this Province, are in for a royal screwing.


And, just because I like to note those things, while the UARB Report and the Hydro Quebec legal action were reported top of the NTV News, it took approximately 23 minutes for the CBC to realize that these were important issues which also deserved airing. Yes, the CBC skipped over a whale of a story for a ‘whale’ story; two of them, actually, and a bunch of others. None was as dramatically important to the future of this Province, as the UARB Decision.   I suppose they have their priorities!


Contrary to anything CEO Ed Martin (or the CBC Web Site) may have stated, the UARB did not approve the application by Emera (actually the reference is to Emera Subsidiary “NSPML”).  The approval was “conditional” and that condition was no minor matter.


What Newfoundlanders and Labradorians need to note, however, is the fact that the NS UARB wants access to the 40% percent of Muskrat Falls power, deemed surplus to the Province’s needs. That is in addition to the 20% already committed to Emera (known as the Nova Scotia Block) offered in return for having Emera fund the Maritime Link (ML).  Nova Scotia wants the additional power for even LESS than it is paying for the Nova Scotia Block.  It wants more power at a price established by the Massachusetts HUB, where market prices for the New England States are established; right now, that would be 3-5 cents per KWh, when adjusted for 'wheeling' fees and other costs.
In case you are unsure, this “surplus” power is the ‘juice’ Premier Dunderdale, Ed Martin and Jerome Kennedy, all at various times, said would be available for the New England market, for Labrador Mining including Alderon, for industrial development within the Province and to meet the forecast increase in domestic demand .


For clarity, what we call “surplus power” is called, by the UARB “Nalcor market-priced Energy”.   The "blended" price is achieved by taking the Nova Scotia Block (20%) and giving that Province access to the cheap "Nalcor market-priced Energy".  This “blended” price is now the price of Nova Scotia’s participation in the Muskrat Falls Project. It is also the price NL must pay if it is to receive the Federal Loan Guarantee.
The Nova Scotia Block will already cost their ratepayers less than half the rate, Newfoundlanders will pay for Muskrat Falls power.  But, the UARB wants to lower the cost further.
What should Newfoundlanders and Labradorians fear? That CEO Ed Martin and Premier Cathy Dunderdale will attempt to accommodate Nova Scotia’s demands.


Below, Figure 4-4 Weighted Average Electricity Prices Per MWh - the solid black line depicts the "blended" cost of the power; that is the whole basis of the UARB Decision. 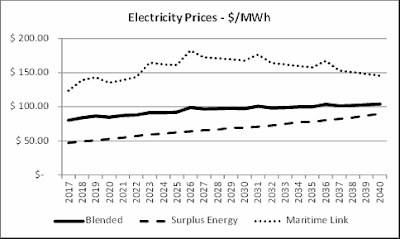 So again, what is the UARB decision all about?  It is about securing a low price for 60% of Muskrat Falls power for Nova Scotian ratepayers.  We pick up most of the cost and virtually all of the financial risk.

The UARB Decision is clear and unequivocal.  I have extracted relevant paragraphs.  (The number to the left of a “UARB DECISION” is the denoted numerical paragraph from which the quote is taken).
(Any underlining is mine.)

The UARB believes Nova Scotians are entitled to the "Market-priced Energy" because Emera framed its Application in a way that assured the UARB that NS would benefit from surplus ‘cheap’ power and thus make the ‘expensive’ NS Block less costly, through averaging, over the long term. Note the phrasing and the word “underpins” in the next UARB paragraph:

[455] The fundamental assumption which underpins the Application is that NS
customers will enjoy a blended rate for electricity which is comprised of a weighted
average of the costs reflecting the NS Block and the projected amounts and prices for
Market-priced Energy over the 35 year term.

Again, Emera assured NS access to surplus cheap power; now the UARB is coming to collect and to confirm the promise by way of legal agreement.

For this purpose, the UARB uses the phrase "enforceable covenant". See para 457 below:

[457] The Board concludes that the availability of Market-priced Energy is
crucial to the viability of the ML Project proposal as against the other alternatives. More
importantly, the Board finds that without some enforceable covenant about the
availability of the Market-priced Energy, the ML Project does not represent the lowest
long-term cost alternative for electricity for ratepayers in Nova Scotia.

Comment:
Guarding against the risk that the Nova Scotia Government or Emera might fail to understand its position, the UARB laid down a specific condition for approval of the Maritime Link:

UARB DECISION:
[459] Accordingly, the Board directs as a condition to its approval of the ML
Project that NSPML obtain from Nalcor the right to access Nalcor Market-priced Energy
(consistent with the assumptions in the Application as noted in NSUARB IR-37 and
Figure 4-4) when needed to economically serve NSPI and its ratepayers; or provide
some other arrangement to ensure access to Market-priced Energy.

Comment:
Note the words, in para 459 above, “or provide some other arrangement…”  Even Ed Martin noted the "other" UARB reference, in his Press Briefing.  There is no "other" provider of 'cheap' energy to secure the Muskrat plan.

Note, in para 460, that such a "condition" should be a simple matter, because it is only arranging to give “effect” to the deal Emera and Nalcor has already entered into:

UARB DECISION:
[460] In the Board's opinion, such a condition should not create any practical
difficulty because it would simply codify what NSPML asserts is the effect of the
arrangement in any case. It would also confirm what NSPML already states is Nalcor's
view of their future relationship.

[461] This is a simple remedy to the fundamental risk underlying NSPML's
Application for approval of the ML Project. If no such condition was imposed, the Board
would fail in its regulatory oversight by approving an application that could potentially be
commercially disadvantageous to NS ratepayers.

The UARB is treating the matter of Surplus or “Market-priced Energy” so seriously that it is not prepared to leave the issue, to the discretion of the Nova Scotia Government.  The UARB is demanding, not just that Nalcor’s (or an alternative proposal) be submitted to it again, but that the Interveners will be given another opportunity to comment on whether such an agreement meets the Conditions it has prescribed.  The UARB also tells Emera how it will assess the acceptability of any ‘alternative’ pricing mechanism on which the parties may agree.   See Paragraphs 230 and 231 below:
UARB DECISION:
[230] The Board will make itself available on an expedited schedule to review
commercially reasonable terms submitted by NSPML and Nalcor and for comments by
the Intervenors.

[231] The Board notes that NSPI will be required to act prudently in the
acquisition of Market-priced Energy as it would with all other fuel related decisions.
Decisions related to the purchase of Market-priced Energy will be subject to the
provisions of NSPI’s Fuel Adjustment Mechanism and the oversight that occurs under
that mechanism.

In summary, if the UARB is to approve the ML, Nova Scotia must be given, not just access to 20% of the power from Muskrat Falls, it must have access to 60%.  The 40% ‘surplus’ block must be cheaper than the first 20% Block.  Nova Scotia wants more power for less money.
Remember the Upper Churchill deal where Hydro Quebec gets a lower price for the nest 25 years than it received during the first 40 years of the Contract?  Nova Scotia wants its Upper Churchill Deal.  And, while you nod in agreement, it wants you to pay for it!
That was just the early part of yesterday!

In the afternoon, Hydro Quebec (HQ) reacted. It has filed a lawsuit in the Quebec Court. Likely, the only person surprised was Ed Martin, though he should not have been.

Ed Martin was warned about the matter of the Water Management Agreement, by Members of the 2041 Group, and of the likelihood that HQ would contest an Agreement its Members, on the Board of CFLco, refused to sign.

Coffey wrote in the Telegram newspaper, “Based on the data and scenarios in Nalcor’s own Pre-Filed Evidence, without a working water management agreement Nalcor would be limited to approximately 175 MW of continuous delivery in a long-term power purchase agreement for Muskrat Falls.”

Coffey might well ask again: should the Muskrat Falls Project continue, in the absence of that “legal certainty” and given that, in return for $7.6 billion, we will get a mere  175 MWs and all the penalties for non-delivery of electricity that will be brought by NS and Emera?

While the patience of all Newfoundlanders and Labradorians is stretched to the limit, with the intransigence of Quebec, it would be silly of us to get back at Quebec by pointing the gun at our own head.

If you thought our troubles over Muskrat Falls, ended upon Project sanction, the events of Monday serve to confirm otherwise.  In the immortal words of Sir Winston Churchill, whose very name is invoked with most every reference to hydro power in Labrador: