Competitive tendering of government services, including capital projects, is not just important; it is a key feature of honest, fair, and transparent governance.

Introduced in this Province following the ouster of the Smallwood Administration (known, among other things, for its arbitrary award of government business and cost plus contracts) the Public Tendering Act (though still flawed) is viewed by many as a bulwark against the corruption, nepotism, and excess, experienced in an earlier time.

The Humber Valley Paving Contract, arbitrarily cancelled by a former Minister of Transportation and Works spoke to a demand not to return to a time when select political cronies got rewarded for their partisan fealty. It elicited a storm of protest.

Nalcor is exempt from the Public Tender Act. Does that mean Nalcor spending should have no oversight at all? 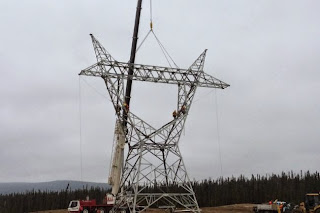 The recent announcement that the first HVdc tower on Labrador-Island Transmission Line (LIL) was erected on April 12, 2015 inspired a person to contact me and offer his trail of documents detailing how the work got awarded.

I don’t know if he worked for Nalcor. He said “just call me Tender Man”, with more of a smirk than a smile, his sincerity, however, never in doubt.
While the information was located on Nalcor’s web site, it is easy to see this is not the stuff an average citizen would easily identify or pursue.

Two contracts are relevant; to some extent the first one sets up the second one.
The facts are these:
Contract #CT0319 covers construction of the transmission line between Muskrat Falls and the Upper Churchill facility. This is an A/C Line intended to facilitate the Water Management Agreement (now undergoing challenge in the Quebec Superior Court).
On Sept. 28, 2012 a Request for Proposals (RFP) was issued for this Contract; the RFP closed on Jan. 13, 2013.
The Febuary 2013 Report from Nalcor indicates eleven bidders had pre-qualified.
Nalcor awarded the Tender to Vallard on December 17, 2013.
Was the contract awarded to the lowest bidder?  We don’t know.
We only know Vallard Construction LP was awarded the Contract.
If the Tender had been awarded, consistent with the practices of the Public Tendering Act, we might have attended an “Opening”, watched the “Steel Box” unsealed, and the bid amounts announced. The Bidders were “qualified” as the Nalcor documents show. The only issue outstanding was the bid price. The bids would have been part of the public record. The public would have known it received best value.
The figure of $200 million has been mentioned. But, again, we don’t know the precise amount. And, we don’t know if the award was given the lowest bidder.
What comes next is far bigger.
Contract #CT0327 involves the erection of approximately 3,300 towers, over a three year period, along a D/C, 1100 km transmission line stretching from the Muskrat Falls site to Soldiers Pond. It is at least five times the size of the earlier one mentioned. Including Nalcor provided materials this contract is worth $1 billion.
Originally, two contracts were contemplated to construct the Labrador Island Link TL, but one RFP was cancelled quickly. In the end, only one contract was finally issued.
Let’s look at the trail of evidence provided by the Tender Man.
Package CT0327 was issued for one Section 1. A second Package CT0346 was issued for Section 2. (The two Sections represent the entire 1100 Km. of line)
Both RFP’s can seen listed on Table 20 of the Muskrat Falls Project – January 2014 Report indicating that the RFP’s “are expected to be issued during 2014”.

That is the last reference you will see of Package CT0346.

It is missing from the March 2014 Report and afterwards. (The RFP Close date on this Report for Contract CT 0327 is presumably a Nalcor typo).
Nalcor does not provide information on how or why CT0346 was melded into Contract CT0327.
Next, examine Table 19 of the June 2014 Project Report.
Note that the RFP for CT0327 is listed as “Issued”, except it shows no bidders in the “Qualified Bidders” column.
Now, look at the July 2014 Project Report.
The status of CT0327 is reported “Issued and Closed”; that's the entire 1100 Km of Transmission Line and 3300 towers.

No Tender -the Tender process is shut down by Nalcor.
“Tender Man” points out not only did RFP CT0346 disappear, bidders were told not to complete bids for CT0327.
The contract was awarded to Vallard Construction LP, the same contractor given the award of the transmission line to the Upper Churchill.
The Muskrat to Upper Churchill TL had 11 bidders. We don’t know how many of them intended to bid on the TL to Soldier’s Pond.  We do know some of them planned to bid and had begun the estimating process. Some bidders may have already spent tens of thousands of dollars on their bids by the time the process was shut down.
How does a $1 billion Contract (even if it includes Nalcor purchased materials) get pulled back from an independent bidding process?
We need to know.
Over 1100 km. of terrain, vast environmental differences, geographical challenges as to access, equipment, as well as management, all would have had an influence on the final Bid price.  But the scope of the work in this RFP is well-defined. It is as good as it gets for the tendering process.
There is nothing unique about erecting a transmission line.
Major players in the oil industry constantly go to Tender for far more complex and larger projects.
Husky, Exxon Mobil, and others consider it an essential process.
Its importance for government far outweighs… because, at stake, is public money and perceptions of fairness and equity, in addition to value.
Did Vallard offer expertise or skills not found with the other Bidders?
Evidently not.
Vallard Construction LP enjoys no special status in the Tower/TL construction field. The Company boasts the Labrador Island Link TL as the largest contract it has received in its history.  It is also the only Tower/TL work they have undertaken in eastern Canada.
The arbitrariness and secrecy of Nalcor was legendary during the sanctioning process for Muskrat Falls. Its disavowal of any public responsibility for even minimal adherence to the principles of the Public Tendering Act suggests this is a Crown Corporation totally out of control.

We need answers to those questions:
Why are contracts valued in the hundreds of millions awarded without public tender by Nalcor?
Was the Minister of Natural Resources consulted regarding the approval process?

Did the Minister obtain the approval for the two Transmission Line Contracts, and other untendered Muskrat Falls contracts, to the Premier and Cabinet?
Otherwise, is Nalcor CEO Ed Martin’s word enough when major contracts are issue without public tender? Is that all that is required to demonstrate everything was above board?
Where is the Oversight Committee and why has it not reported on those Tenders?
What was the final value of the contract awards and were they within the budgeted amounts for the work?
Meanwhile the Government raises taxes.  It sends another $760 million to Nalcor.

“Tender Man” asks that I write the Premier and demand an investigation.

I will publish the Premier’s reply on this Blog. The Premier and Nalcor CEO Ed Martin have a lot of answering to do.