"RE-IMAGINING" OURSELVES, A GOOD BEGINNING TO 2021

The year 2020 will not be remembered fondly. Covid-19 represented a monumental social and economic challenge for millions. Yet, in NL, a small and dispersed population suddenly found their large landmass a refuge against viral spread, as more populous parts of the Country continued to struggle with the problems of density, stress and indifference.

Now, each Province's capacity to quickly distribute and inoculate large numbers of people will give further testimony to whether our vital and expensive health care service is much more than an overindulged bureaucracy. In NL, too, a review of delayed surgeries, testing and other services will provide greater clarity about a system overfunded by, at least, $400 million and a propensity for inefficiency, inflexibility and resistance to change.

Change is on some minds, including the Premier's, though the jury is "out" as to whether his enthusiasm for political leadership has staying power.

Premier Furey has asked Dr. Patrick Parfrey and Sister Elizabeth Davis to head a Task Force on Health Care, known as Health Accord NL, and to "reimagine" our current system. While the two are capable and well-intentioned people, sceptics worrying of their dislodgement have little to fear. 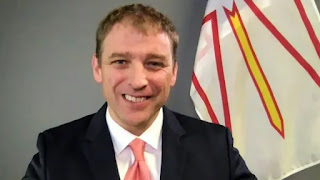 The same can be said of Moya Greene whose "imagination" is also sought. She has been asked to "reimagine" the whole NL economy, as if a mere ascription or description of something never far from dysfunctional can be straightened out by official dictates. Does anyone think that Verafin, the NL technology company recently sold to Nasdaq, grew or was even given birth by a politically-inspired "re-imagining"? As they say, wot rot!

A vast number of economic studies have been conducted on the NL economy since Confederation. Just ask David Vardy, a member of Moya Greene's team and frequent writer on this Blog. He has been involved in a good many of them, including a 1967 Report issued two years after J.R. Smallwood appointed a Royal Commission on Newfoundland Economic prospects, under the Chairmanship of Gordon Pushie. The work, having failed to hail the Premier as the personification of innovation and foresight,  still prompted him to stand in the House of Assembly and called it 90% trash! What number is Moya's Study? How many others have been given the same dusty destiny? Will her Report receive from Furey even less push than Pushie's?

Vardy might be too much of a gentlemen to tell Moya that until the Premier has dealt with the "low hanging fruit" of bureaucratic waste, beginning with Nalcor, he should save the tedium of boors, and special interest groups, for later. Politicians shouldn't need experts to tell them (or us) when it is time to sober up.

That having been said, what incentive is there to make change when, as citizens, we revel in  political hand-wringing and delay?

When "imagination" at the public policy level is just one more rhetorical utterance wrapped inside leaderless-ness of excessive duration, one given extension by an almost universally inspired "need" for a majority government, what does it say about our desire for, or capacity to endure, fiscal repair? Besides, if imagination is so critical, why is it so easily eroded by flat-footedness?

That is one dimension.

Another is this: successive Finance Minister's - both Parties - have complained that they are unable to get Caucus support for fiscally responsible Budgets. Most of Premier Ball's Caucus Members are running again. There is no pleading heard from Premier Furey for competent people to lay down their tools and to enter politics. The same can be said for Ches Crosbie. Consider what is said when 'ol folks make a computer strike more than once, looking for a different result!

Of course, you were thinking about the miracle of Christmas, weren't you!

The pandemic experience has ushered in a new refrain: "we are all in this together".

"Right on", I can hear Snook laugh, derisively, his reflexive aphorism hanging in the air, in search of a suffix - a word, a concept, anything  - that anticipates the sheer nobility of another concept - "self-determination." He might have asked coyly: "Hand-up" or "hand-out?" and admonished the adults for clinging to the hope that, in Ottawa, there is a Santa Claus.

What does Uncle Gnarley want for the New Year? Essentially, a decision confirming our society is ready to stop being self-destructive. How? First, by demanding that we are governed under basic norms of honesty and decency. And, then, some action to tighten the fiscal belt and forestall Commission of Government II.

Commissioner LeBlanc's 1100 page missive wasn't just about the waste of $14-15 billion; it exposed political and bureaucratic mendacity on a large scale.

Many are content to blame CEO Ed Martin which is a good start. Others, former Deputy Minister, Charles Bown, though it is better if you hear the full story; the trail of deceit, the irresponsibility and incompetence, the shirking of duty. It runs wide and deep, too. Some were politicians. A few of the culprits still run Nalcor: Gilbert Bennett and Paul Harrington! And we still haven't given the "pile-driver" - Jim Keating - to Norway.

We would drive off the road rather than ignore any text message. But send a message to the Premier about institutional deception on a grand scale, about a Province broke as a result, and of the need for change; there's no time for that!

Not just Moya Green, Dr. Pat Parfrey or Sister Elizabeth Davis have a lot of "re-imagining" to do; we need to, too. Every one of us!

Believe it or not, there were reasons for optimism in 2020. We witnessed the political "arse-end" of one of the dullest and most spineless Premiers in modern NL history, Dwight Ball. God speed, goddam, for sure.

Then, too, word has it that the wise residents of the District of Avalon rejected former Premier Paul Davis as the Federal Tory hopeful.

On the scale of political leadership, we may have bottomed-out!

Now, the other purpose of today's post, here were...drum roll...please...the most popular Posts on the Uncle Gnarley Blog in 2020:

1. BUBBBLE TROUBLE: WHY ATLANTIC PROVINCES TRAVEL IS A TERRIBLE IDEA
by Ron Penney

2. BROKEN TREASURY ADDED TO THE LEGEND OF DANNY

4. MUSKRAT'S "DOOZY" OF A PROBLEM by James L. Gordon

5. “OUT OF THE LOOP” STURGE: ENTITLEMENTS REVEALED

6. TRUMP FAMILY FIGHT SHOULD INFLUENCE HOW WE THINK ABOUT OUR MUSKRAT     OBLIGATIONS by Cabot Martin

7. ANDREW FUREY THINKS RHETORIC AND IDEAS ARE THE SAME

10. WHAT SHOULD WE EXPECT FROM OTTAWA? (Part 4) by David Vardy and Ron Penney