If you were looking for an adage that perfectly describes the lost opportunity represented by the recent Speech From the Throne, it is this: “You cannot solve what you don’t understand.” Otherwise, think of the Speech as the new fairy tale economic narrative, "sunny ways", spun by the city-folk of Central Canada, with the inspiration of the PM.

At the outset, the Address by the Lieutenant Governor, read at the start of each new Session of the Legislature, is commonly laden with regurgitated bureaucratese, rather than a strong message of intent describing the Government's "thinking" and its priorities. This time, while mercifully brief, the Speech was long enough to confirm that the Furey Administration has not a clue about virtually anything.

It is fine to look for expertise from Dame Moya and her Committee, or to Dr. Pat Parfrey and Sister Elizabeth Davis. They are specialists on whom Government relies to define a path and help guard against the Administration going off madly in all directions. But when the Government embraces a version of Canada that is at best fanciful, offering no grounded view or recognition of the raison d'etre of the Province over which it governs, or why the economy is structured as it is, Greene, Parfrey and Davis are just swimming upstream against a current certain to drown their best efforts, and our essential livelihoods, too.

Put a different way, the Throne Speech confirms that the Premier and his Ministers are ignorant of how economies work, especially the fact that they change organically, political influence constituting barely a nudge, even after spending billions. Just ask the Tories.

A specific example: We live in an economy still very largely based upon the extraction of resources. When key minerals — copper, cobalt and lithium — are in great demand, and are expected to be in deficit, globally, as electric vehicle production ramps up mid-decade, the Throne Speech might have, in response, heralded a new age of mineral exploration on the Island and in Labrador.

The Throne Speech gives it no mention. NADA.

Ostensibly, in this brave new world , the one articulated by Ottawa, mining is an abomination, an assault on "Mother Earth" and must, therefore, not be encouraged.

In place of recognizing a sector that offers the prospect of real new jobs, the Throne Speech informs us that the Government seeks “growth industries” - and not just any growth industry, they want “clean growth”.

On this basis, investors hoping to extract lithium have as much chance of recouping their exploration costs as does Equinor, on the Bay du Nord discovery, when the Company submits a “Development Plan Application” to the “sunny ways” crowd in Ottawa. 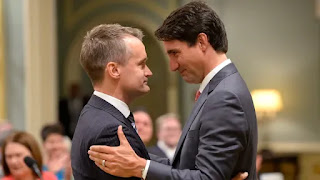 What is “clean growth”? Think of it as little more than a variation on “spending our way into prosperity”. It is the same nonsense offered by the alternative PERT Group (People's Economic Recovery Team) of NAPE, CUPE and MUNFA.

Remarkably, reference to the almost perfectly "clean" fishing industry was limited to how it might provide “a prosperous and inclusive career path for Indigenous peoples, women, and young people.”

In the face of the collapse of the building boom in Alberta — the effect of which on the rural parts of this Province is a matter of great concern — one might have expected the fishery to receive the prominence neglected under ‘Danny bucks’ and later.

Indigenous people, women and the young ought to have a stake in the most important renewable and "clean" industry in the province, but if any of them are looking for this Government's vision as to how the fishery will accommodate them - and continue to employ thousands more - you won't find it in this Throne Speech, or elsewhere.

Rural NL will find no comfort that they have a government that has a clue how they will earn a livelihood in the "new" Canada, now that the old ways are no longer welcome.

Of course, Premier Furey and Seamus O’Regan are of one mind with this misguided view of Newfoundland's future. The Federal Minister told the CBC recently: “we need oil workers to accomplish two things — lower emissions and build renewables.” The view was repeated on two occasions in the interview; it was not misspeak.

If anyone was listening, they might have interpreted the Minister's remarks as a reminder that NL workers have no future in an offshore oil industry or in any other that does not conform to "urban" Central Canada's view of the world.

O’Regan has already shut up the industry groups at NOIA and the Board of Trade with some temporary largesse. Not one of them as much as noticed the Minister’s declaration.

Elsewhere, no one in the industrial development department of Too Good Arm — rural NL still sleeping off the megaprojects — as much as flinched, despite the lunacy of his suggestion.

“There is no overnight solution,” the Speech asserts — because it took a long time to get into the mess. It talks about the need for “bigger, bolder steps", but no effort is made to gird the public for the long, painful slog necessary to lift ourselves from our excessive optimism, overbearing expectations of government, and the belief that someone else, i.e. “the Feds”, will pick up our tab.

Again, the public is supposed to believe  that they — not the Bond Market — will decide how much indebtedness we can bear.

And, though the Province is well into its second year of “negotiating” rate mitigation for the Muskrat Falls Project, the real test of the Government’s leadership is found in just two sentences: “Newfoundland and Labrador will not be left to solve its problems alone. My Government will continue to build on its solid relationship with the Government of Canada.”

If rate mitigation is any test of whether Ottawa shares a similar view, don’t get your hopes up on any relationship AFTER the Federal Liberals have won a majority government.

All things considered, I am unable to understand why Furey hasn’t already put Moya on a plane, having supplanted her with Seamus O’Regan.

Indeed no one but Seamus could have possibly written this line in the Throne Speech:

“Understanding the full magnitude of the challenges will allow this province to choose the right solutions for the future. It will strike the right balance in navigating the necessary transformative change for all people in this province. My Government will focus on responsible debt management while investing in our exciting growth industries.”

There it is folks" "transformative change", "exciting growth industries" - all accomplished  amidst a sparse population, high taxes, high debt and low productivity. The tooth fairy is close by.

Were Furey and Shamus a little older, they might have robbed a single sentence from another self-styled "industrialist" Premier; Smallwood, that is.  All they needed to have written for Her Honour is: "Burn 'yer boats, two jobs for every man (and woman)" and had her deliver it by Skype. In the process, they would have saved the release of at least a ton of carbon, Her Honor's limousine left in the driveway.

Of course, in keeping with the Paris Accord, the people of Two Good Arm are remined that a more environmentally friendly way to prove that you have shod the old ways, having embraced "transformative change", is not to burn them but to pull them upon the land wash and let the boats rot.

For the oil workers eying an opportunity, don't even think about it.

Your destiny has been decided.