THE GHOST OF SIR RICHARD WEIGHS: A BUDGET PRIMER

When Finance Minister Siobhan Coady rises in the House on May 31 to deliver the Furey Government’s first Budget, it will be a test not of her resolve, but of the Premier’s determination to give NL the financial leadership that recent Premiers — from Williams to Ball — refused, or were incapable of providing.

This is Premier Furey’s day. The big question is: in place of leadership will we hear only echoes of NL history’s famed bad boy, Sir Richard Squires, whose Administration in the 1930s offered to sell Labrador for $110 million?1

Hopefully, the Premier will be remembered for more noble reasons. Except, Furey has not yet made a single decision about anything important, so we will have to reserve judgment on this, and on his courage, too.

Moya Greene, notwithstanding the deficiencies of the PERT Report, essentially told the Premier that we have arrived at, in the vernacular, a ‘come to Jesus’ moment.

She omitted saying that we may have left it too late. She would know, however, that not even (real) economists assess their discipline in isolation from politics. Therein lies the part, called “hope”, on which NL clings.

Still, on a practical level, if another year passes without a solid start to fiscal repair, the Budget won’t justify your time anyway.

That is why I am proposing a 30-second plan, one designed for you to avoid the PR “spin” that the folks in Executive Council will happily write up, in an effort to delay their own “write down”.

The mechanics are simple enough.

In place of listening to the Finance Minister, you can go to “Statement I” of the Budget Estimates (see last year's below), located almost at the beginning of the document.

This is an exhibit containing a summary of the Government’s cash requirements for the 2020-21 fiscal year. Look for “Estimated Revenues” — how much money the Government receives — as well as the “Total Net Current and Capital expenditures” — how much it plans to spend on programs, services and infrastructure.

On the same page, further down, the difference between revenue and expenditures is recorded as the “Total Cash Requirement - Budgetary”. This is a euphemism for "borrowing". The previous year’s numbers are there too.

If you see little difference between this and last year’s numbers, you will know that the Government has made no attempt to exorcise the ghost of Sir Richard’s time. 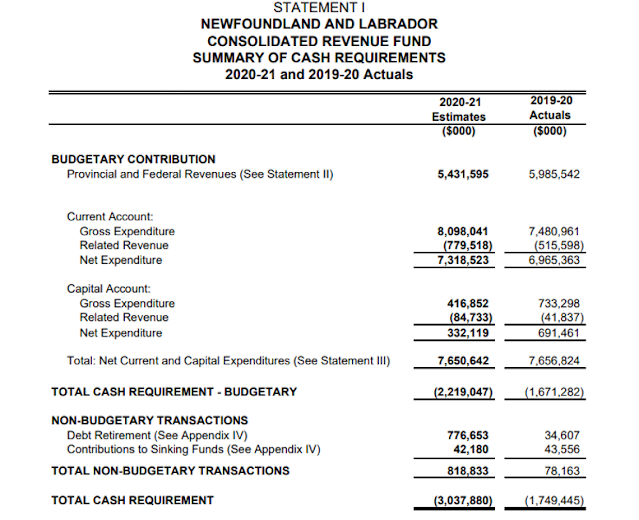 Now, skip almost to the very end of the Budget Estimates, until you arrive on Appendix III.

This is where the public sector debt is ostensibly described. Look for “Total Provincial Direct Debt”, “Total Tax-Supported Debt” and “Total Public Sector Debt” (as if there is any real distinction).

Fair warning: Unless the Department of Finance was embarrassed enough to have corrected several large omissions, considering Moya Greene’s disclosure of what she called “The True Debt”, none of the figures will be correct.

The exhibit is a “lie sheet” for politicians, a falsification that permitted them to report the “Total Public Sector Debt”, last fiscal year, as $24.16 billion when Moya Greene tallies up $47.3 billion.

My advice: Believe the Dame!

Just as you cannot manage what you cannot measure, neither can you objectively assess the Province’s fiscal circumstance based upon contrived Budget Estimates. They only prevent you from ever knowing if the public debt is increasing or declining.

There are two other things you need to look for.

The PERT Report includes a table (below) containing a “Summary of Proposed Fiscal Changes”, beginning in the current fiscal year (2021-22). It states $1.369 billion as the starting point for fiscal repair, which Moya calls “Deficit without the plan”. After cuts and proposed tax increases are applied, the deficit in Year One is calculated as $1.134 billion. 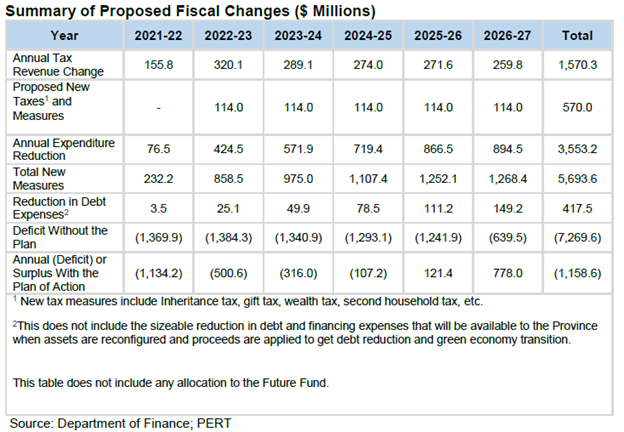 The starting figure when the estimates are produced on Monday are unlikely to be this low. The cash deficit in the 2020-21 was $2.219 billion (refer to Statement I above). How could Greene have missed something this basic?

Don’t count on Siobhan Coady to explain Greene’s omission or even to have noticed. Perhaps an astute reporter will put the question to officials during the Budget “lock-up”.

The second issue is the ghost of “Sir Richard”.

If not Coady, perhaps the Premier can advise if the packaging of the Churchill River assets, as the PERT Report proposes, now constitutes a policy decision of his Administration.

He will need to inform us, too, if it is a replacement for the “rate mitigation” plan he and Dwight Ball assured the public would be forthcoming from their friend, PM Trudeau, and the Government of Canada?

Possibly the “best-before date” of that assertion expired with the General Election.

I am not fond of anyone selling off parts of the ‘ship of state’ as ass-covering for someone else — Trudeau or Danny Williams.

Any eighth-grader can figure out that PM Harper got snookered by Nova Scotia MP and Deputy PM, Peter McKay; the result was the most incompetent due diligence process ever undertaken for any Federal Loan Guarantee.

Indeed, any self-respecting union or business group might have already informed the Premier to begin spoiling for a fight over who pays for Muskrat Falls except that, these days, self-respect seems to be indistinguishable from self-interest.

Finally, it may be unreasonable to expect the Premier to fully quantify the PERT proposals so soon. But we ought to see proof that some evolution in the Government’s thinking has begun. The Budget Address needs to share those ideas.

Otherwise, having given the Budget Estimates your 30-second glance, hopefully you will not have wasted your time.

1 “The territory was offered for $110 million. Squires, who distanced himself from the idea, did not take part in the discussions. Canada, also trying to cope with the depression, rejected the deal.” Dictionary of Canadian Biography Vol 16,  2013. “Squires, Sir Richard Anderson”, by James K. Hiller found under http://www.biographi.ca/en/bio/squires_richard_anderson_16E.html