Recent news reports have disclosed that the November 26, 2021 completion date for Muskrat Falls will not be achieved. No target completion date has been set. Yet the project continues to accumulate costs. A recent Tweet put the daily cost of the delay at $1 million a day. This is an understatement. What is the daily cost, both in total and on a per capita basis?

In this post we set out the bare facts of the unmitigated and misguided Muskrat Falls project, its costs, without rate mitigation, and how they compare with the cost of Holyrood-generated energy, for which Muskrat Falls was intended to offer a less costly solution. We will also look at how unit energy costs for power sold to Emera compare with the costs imposed by the power purchase agreement on local ratepayers. We will show how the project was a misguided, mistaken choice, and how, through the power purchase agreement, it places an unsustainable burden on ratepayers.

The actual cost of servicing the debt, not the repayment of principal and not the operation of the facilities, just the interest and cost of equity, will amount to $770 million a year. This amounts to $2.1 million a day.

What will be the full cost of the project, including principal repayment and operating expenses, in the first full year of operation? How much will the cost of our Island interconnected system rise in the transition from an isolated island to an interconnected island system including Muskrat Falls? How much additional cost will be incurred?

First, let us look at the system without Muskrat Falls, before the beginning of commercial operations of the project. System cost, including Hydro and Newfoundland Power is currently running at about $750 million. This includes the fuel burned at Holyrood. 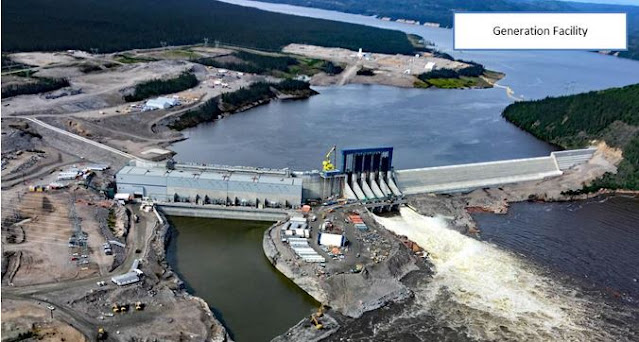 Second, after Muskrat Falls comes on stream what will be the full system cost, taking account of fuel savings, estimated at $178 million? The answer is $1.7 billion. Once export of surplus power has been netted out, estimated at $50 million, we arrive at a full system cost of $1.65 billion, taking full account of interest payments, the cost of equity capital and the return of principal.

Remember that Muskrat Falls was intended to replace the Holyrood thermal plant. Over the past five years the average production at Holyrood has been 1.3 TWh, which corresponds to the amount of Muskrat Falls power which will be needed to supply the needs of the Island. GNL estimated that the cost of Holyrood fuel would be $178 million or 14 cents/KWh. This works out to $1 daily for every citizen.

When we look at NP’s recent application to the PUB for a rate increase, we find they are projecting a decline in sales over the next few years. The surging demand for power on which the case for Muskrat Falls was built has not materialized. Electrification of transportation may increase the demand for power, but this will take time. In the meantime, we have few options other than to export the power or sell it to crypto-currency miners.

We have committed 0.986 TWh of energy for 35 years to Emera with no revenues, no energy charge, to recover the enormous costs we must bear. For the next five years there is an additional 240 GWh which must be supplied, with no revenues, no energy charge. Then there is an average of 1.2 TWh annually which we must supply at market rates. On top of this, if the power is not reliable and we cannot supply power from Muskrat Falls we must buy energy in order to supply Emera, to meet our contractual obligations, thereby fully absorbing the risk to Emera.

The net energy from the project is 4,641 GWh, of which 2.426 GWh is committed to Nova Scotia and 1.324 TWh will be used to replace Holyrood. Revenue-producing exports will be about 2.1 TWh which is unlikely to generate more than $50 million, net of transmission charges.

The Public Accounts disclosed that the deficit for the 2020-21 fiscal year was $1.5 billion. This amounts to $8 per day for each citizen. At $5 per citizen per day Muskrat Falls is a large component of the province’s fiscal dilemma. We do have flexibility to manage our fiscal deficit but the Muskrat Falls shortfall is locked in for 50 years, by virtue of the power purchase agreement. The PPA can only be changed through negotiations with the GOC on rate mitigation.

Muskrat Falls was not the best alternative to Holyrood. The best alternative would have involved a combination of energy initiatives, the most important of which would have been efficient pricing of electricity. Instead of promoting electric space heating the province should have charged a rate higher than the average cost of power production, one which reflected the higher marginal cost of thermal power. This would have modulated the massive switch to electric space heating which exacerbated the winter peak in demand. People would have found more efficient ways to heat their homes if thermal power had not been cross subsidized by low-cost power from Bay D’Espoir and other hydro sources on the Island.

Efficient pricing of electricity, combined with conservation and demand-side-management, would have enabled baseload supply of power to be supplied from our on-Island sources, with Holyrood used mostly for emergency power. Instead, we embarked on an oversized, overpriced, megaproject which will continue to require a large block of emergency power located on the Avalon Peninsula. It was never a choice between Muskrat Falls and Holyrood because of the need for a back-up emergency supply. We will continue to need Holyrood or a replacement thermal plant not too far away from the main population centre.

In the meantime, the costs of Muskrat Falls continue to mount. Even if GE, the software supplier for the Labrador Interconnected system, takes responsibility for the direct cost the province must continue to bear the time cost of the delay. First power was targeted for October 2017, allowing five years for construction. The five years has become nine and counting. The cost of delay is $2 million per day. Once onstream the cost will be $2.5 million daily.

Ratepayers are required to bear the full cost at 67 cents/KWh, under the power purchase agreement, for 1.3 billion kilowatt hours of electric power. This compares with eight cents/KWh for Emera, to obtain 2.4 billion kilowatt hours of electric power. Our province is no longer the “principal beneficiary” of the Muskrat Falls project, given that our exports to Nova Scotia will exceed our own use of the power. Is it fair that we should, by virtue of the power purchase agreement, be expected to pay a power rate which is eight times higher than the charge to Emera?

This could have been a good news story if better choices had been made. We could have maintained our low power rates and kept thermal production costs low. What we needed was practical, frugal, cost-conscious management. Instead, we were seduced by the allure of a grandiose project, offering lots of short-term jobs at high wage rates. We had the option of aggressive policy management to moderate peak winter demand and to focus on Churchill Falls as the long-term solution to the province’s power needs after 2041.

As pointed out by the Joint Review Panel (Recommendation 4.2) the province could have included access to recall power from Churchill Falls as an interim supply of low-cost power to help bridge any deficit emerging before 2041, recognizing that a transmission line would have to be built in advance.

It is noteworthy in this respect that the energy sales of recall power by Nalcor Energy Marketing has been in the same order of magnitude, namely 1.3 TWh, as the energy required to supply the Island and to replace production at Holyrood. Nalcor Energy Marketing (NEM) sells the same amount of power the Island needs to other buyers for 3-4 cents/KWh. It buys the power from CFLCo for only 0.2 cents/KWh.

Instead of redirecting that nearly free power to the Island, GNL sanctioned a project that will instead cost Island ratepayers 67 cents/KWh! However, use of recall power would require a new transmission line to be built well in advance of 2041. An even better solution is to be found through efficient prices combined with energy conservation which was the solution advanced by Dr. James Feehan, and others.

The February 10, 2010 joint announcement by former Premier Dwight Ball and then Natural Resources Minister Seamus O’Regan promised a financial restructuring of the power purchase agreement. Without such a restructuring the ratepayer is exposed to unaffordable, exorbitant power rates which will have a devastating impact on the province.

Did the July 28, 2021 joint announcement by the Prime Minister and the Premier deliver such a restructuring? Did the July 28 announcement satisfy the 10 principles which I set out in my Uncle Gnarley post of June 28, 2021? Did the announcement fulfill the objective a “permanent long-term solution,” which was stated by GOC Finance Minister William Morneau in his letter to Premier Ball in February of 2020 and reaffirmed by Deputy Prime Minister Chrystia Freeland in her letter to Premier Andrew Furey on July 28, 2021, which referred to a “sustainable fiscal path for the province.”

In future posts we will examine the impact of the July 28 Announcement on Rate Mitigation to ask if the new agreement will overturn the fatally flawed power purchase agreement (PPA). If it does not then it cannot form the basis for a long term, sustainable solution which will provide affordable power to ratepayers. The power purchase agreement, between two subsidiaries of Nalcor, must not be allowed to stand.

In the meantime what we are faced with is an unmitigated disaster, not simply a misguided project, as described by Commissioner Richard Leblanc.