THE BUDGET COLLOQUY (PART I): PUT HIM IN THE LONG BOAT TILL HE'S SOBER

The 2015 budget documents contained a piece entitled "Budget Highlights - Balancing Choices for a Promising Future".  This is a glossy flyer which provides a summary of the current fiscal position of the province and a look six years into the future.  It predicts that within five years the province will return to balanced budgets.  It contains sufficient colored graphs, and statistics to seem believable.

All Newfoundlanders and Labradorians are encouraged to read this document.

In a recent Uncle Gnarley post, entitled “It’s the Spending Stupid”, I gave some initial thoughts regarding the 2015 budget. Since then I have been practically consumed with trying to better understand the province's fiscal position; both current and projected. The work has included a financial review of the past twenty years. I hope it will result in additional perspective as I dissect the data.


At  the outset, I can say my conclusions are certainly similar.  I would add, we can’t delay further the massive changes that are required to correct the structural issues that affect the province’s finances.   People should not be influenced by the glossy brochures produced by the Department of Finance. Nor should they suffer the unsubstantiated optimism that an inevitable rebound in oil prices will take care of all our problems; a view held by the Government's advisor, Wade Locke.
Uncle Gnarley has been gracious enough to provide me the space for a three part series to present some of the data from the past 20 years of budget documents (both the estimates, and the public accounts).  Furthermore, I will offer my own opinions on the provinces present fiscal situation, a recommended plan to control spending and restore a reasonable balance to spending. This first Part will review the government spending over past years, with a view to educate the reader as to where the oil money has been allocated.
:
Embedded within It's the Spending Stupid" is a graph containing the inflation adjusted spending for the past 20 years by the government of Newfoundland and Labrador.  The data was taken from “the estimates” and adjusted for inflation in accordance with the Bank of Canada's online calculator.

The data demonstrated that in the period from 2006 to 2010 the annual inflation adjusted spending  increased 35% in four budget cycles.   Despite recent “austerity” budgets, real spending has held steady since 2010, though a surprising increase is forecast in the current 2015 election budget.

This is an alarming increase in public spending.

Even more alarming is the fact that, based upon the 2015 Budget Highlights document, we are about to embark on a borrowing program of nearly $5 billion (new debt) over the next 5 years. Moreover, this new borrowing is not required solely for capital works projects, infrastructure, or Nalcor investments. 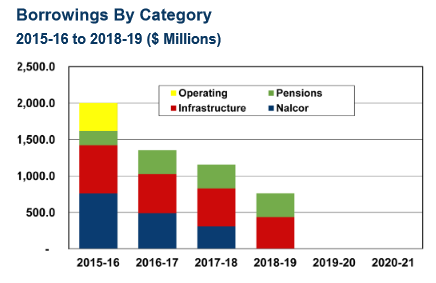 Of the $2 billion being borrowed in 2015, nearly $350 million is required for the day-to-day running of government.  It is reasonable to ask, despite the collapse in oil price, how can we be in an operating deficit position, even with a relatively strong economy powered with 3 simultaneous mega projects (Hebron, Vale, and Muskrat Falls)? Let's remember either of those projects would have been an economic messiah in the pre-oil economy of Newfoundland and Labrador.

The answer lies in the spending trends over the past 7 years when compared to the historical norms.  The author has investigated 20 years of data from the public accounts in an effort to determine the trends in spending.  The data comes from the annual report of Program Expenditures and Revenues contained on the Department of Finance website.  Unlike the “estimates”, this data is based on the accrual accounting method, and presents the expenses in the year they accrued.

Figure 2 presents a revised Gross Revenue and Gross Expenditures made by the province from 1997 to 2013, with a forecast to 2020.  The actual data comes from the “Consolidated Statement of Operations” within the annual public account documents.  The forecast is contained in the 2015 budget highlights document.  This data is expressed in real 2015 dollars.  Again, the historical data has been adjusted for inflation as determined by the Bank of Canada inflation calculator.  The data applicable to future years has been discounted by 2% annually for inflation. 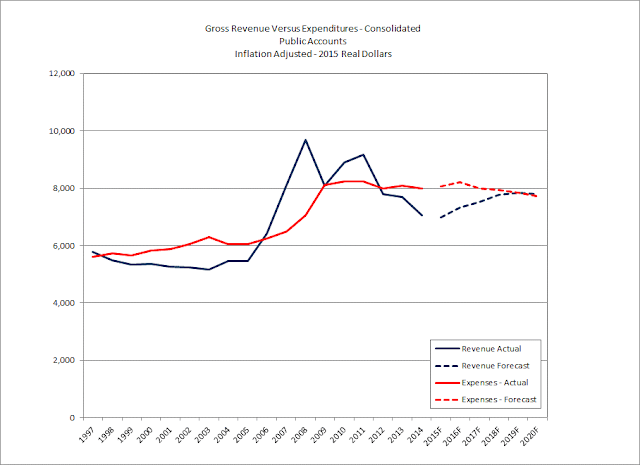 On a real dollar basis, expenses were relatively consistent in the $6 billion dollar range from the period from 1997 to 2006.  From 2006 to 2010 the annual expenses increased to $8 billion, where it has remained relatively constant, in real terms.  Despite a small uptick in 2016, spending will slightly decrease by 2020.

The Province's spending profile dramatically changed in the period of 2006 to 2010.  Where did this money go?

Figure 3 provides a summary of expenses by object, as documented in Schedule 12 of the public accounts.  Again, this data has been adjusted for inflation.  The reader is reminded the data is taken from the consolidated expenses, and not from the “estimates”.   As such, the total “capital works” spending is not recognized in the year the money is spent.  Rather, the amount of depreciation for a single year is recognized in the “amortization” line item within the annual expenses. 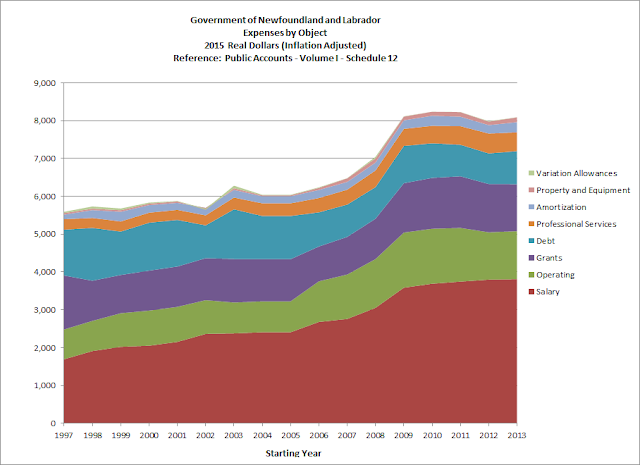 
It is no surprise to anyone who lives in St. John’s that there has been a rapid expansion of the public service in this province.  There is now literally a government office in almost every strip mall in the city.  Having reviewed the “estimates” it is no surprise that salaries have increased at rate far outpacing inflation.  Figure 4 provides a summary of salary only data, from the period 1997 to 2013, again adjusted for inflation.  Also included in this graph is the percentage (%) of salary compared to the total expenses of the government. 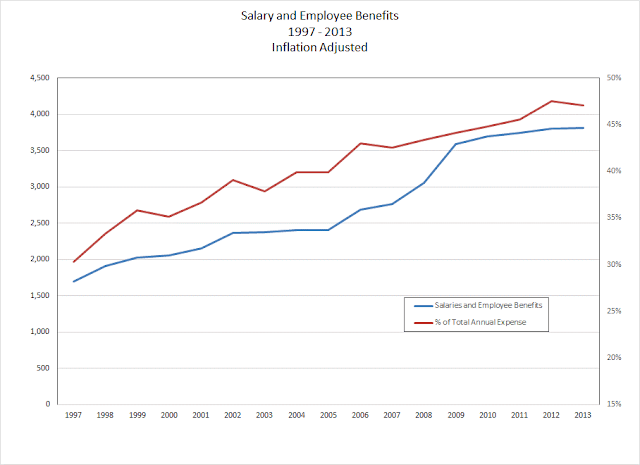 This growth should make even the leaders of the provinces unions blush with shame.

This is a startling statistic. 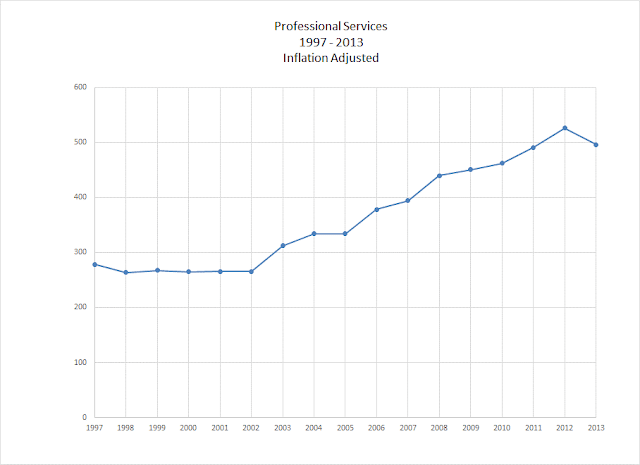 This is truly a startling number for the provincial government to spend on outside consulting services.

The taxpayers of this province must ask why, despite the historical increase in the size of the public service, and given the salaries which we pay public servants, why we have had to effectively double the budget for external consulting?

I believe that the Opposition should be asking many questions concerning the nearly half billion dollars in public expenditures in this category.  How much of this is tendered competitively? What is the process for awarding consulting services contracts? How many contracts does this represent?  What services are these consulting doing? How much of this $500 million is essential?

Most importantly, we need to ask how much of the work completed by consultants should actually be performed by the Public Service?  Why is the government doing less, with more?

To give this issue further perspective,  4% of the 15% HST collected from every NL taxpayer. This means that almost 1/3rd of all the HST revenues collected is used exclusively to pay for consultants to the government.  Figure 5 should be met with outrage from the taxpayers of the province.


As explained above, the annual public accounts summarized in Figure 3 contains only the annualized depreciation on new capital assets. Figure 6 provides a summary of the capital spending for the past 20 years (based on figures contained in the “estimates”).  This is the amount of cash the government has actually spent each year on capital works projects.  Again these numbers are adjusted for inflation and the spending on the resource projects (ie: Nalcor) has been removed to provide a true comparison. 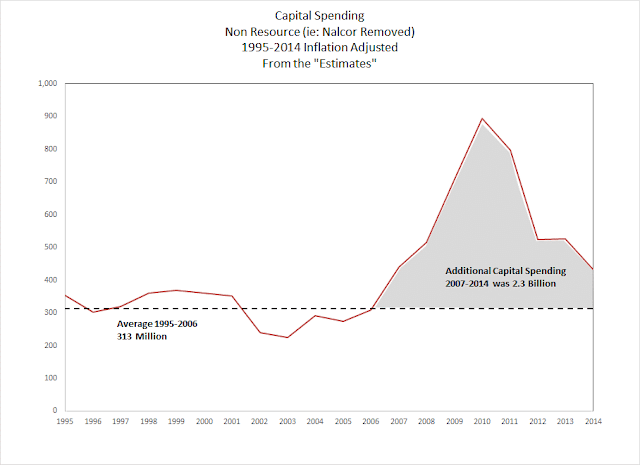 In the period from 1995 to 2006, the province spent about $313 million annually on capital works projects.  Since 2007 that number has increased, but it has now returned to a more historical reference point.

In the period of 2007 to 2014, the government spent a cumulative $2.4 billion on capital works projects in excess of the historical reference, or $300 million more a year on average..

Due to the method of recognizing the depreciated value as an expense line in the net debt calculations, the spike in spending from 2007 to 2013 will eventually lead to an increase in the provinces “net debt” unless our annual operational spending can be funded by revenues and not new borrowing.   When it comes to the consolidated accrual accounting, and net debt calculations, the province has only robbed Peter to pay for Paul.

Where Have We Spent the Oil Money?


The provincial government will promote the idea that the oil wealth has been invested in such things as capital spending.  Adopting the methodology of Figure 6 to compare the spending of salaries to capital spending, it is clear that the majority of the oil wealth has been spent enlarging the public service and increasing employee benefits.  This is shown in Figure 7. 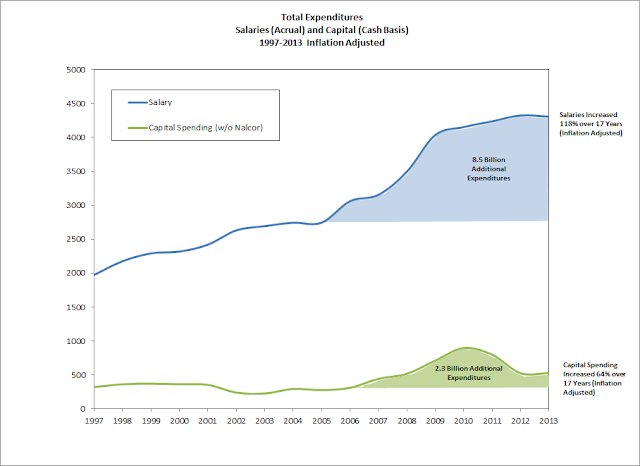 Figure 7:  Growth In Salaries Versus Growth in Capital Spending

Since 2005, government has spent $8.5 billion of the new oil wealth in salaries for public servants.  It has spent $2.3 billion on items such as new schools, roads, and infrastructure. The math suggests for every one new dollar spent on infrastructure, three dollars has been spent on salaries. Capital works projects can be reduced with the stroke of a pen. Public service salaries are not so easy to cut.

It is important to note that these huge public sector cost increases were enabled by a strong economy, large and short-term oil royalties, and low interest rates.  But the huge increases were truly enabled by successive governments who were content to spend like sailors on short leave.

But now at least two of those three enabling conditions are no longer present.  Furthermore, as recently documented within the Globe and Mail article entitled "Canada's Governments Brace for Looming Debt Crunch", how long will these low interest rates remain?

It raises the question: where will Newfoundland and Labrador be in 15 years, when the cost of borrowing money is back to historical levels?

By any definition, this is a province that needs to start planning and preparing, now, for 15 years into the future. The problem is, successive recent budgets, all of which have been characterized by an unsustainable level of spending, only demonstrate that we are incapable of planning for even 15 months.

Can we start over?

Perhaps. But, first, the political leadership has to change.  Newfoundland politicians lead by unbridled optimism.  Decisions are made on the greatness of things yet to happen.  Whether it would be the recovery of the price of oil, revenues from Muskrat Falls, or the potential of deepwater oil fields, our recent class of politicians are happy to form public policy based on wishful thinking.

With the 2015 budget the PC’s have decided to essentially hold the course on spending. They are banking on a rebounding economy to fuel new revenues to balance the budget into the future.  If they are wrong, then get ready for even bigger deficits ahead.