THE BUDGET COLLOQUY (PART 3) WHISTLING PAST THE GRAVEYARD NO MORE

Authors Note:
Initially, I had planned this series in three parts.  Of the two already posted, the first dealt with provincial government spending and the second with revenues.  The proposed third part was originally intended to contain a long term sustainability plan for the province.

This last piece of work has proven much more difficult to write in comparison with the first two posts, which were heavily annotated with statistics and graphs.  In the course of writing, I found it difficult to be thorough without raising the plethora of issues the province currently faces.  As a result, the script has grown to over 20 pages, and it is still not finished!

Uncle Gnarley has kindly provided space throughout this summer, to continue this colloquy.  I expect it will comprise an additional six to eight posts.  The new plan will conclude with a single post in which the various parts will be reflected in a single reference.

As Uncle Gnarley cherishes debate, I would be grateful if readers submitted their ideas in the comments section.I have examined the numbers in detail. I am convinced it will be a challenging road to return to balanced budgets.

We need debate in this province if the solution to our fiscal problems are to truly reflect the views and interests of all sectors of our society.  The government needs ideas and, likely, the Opposition parties, too.

Thank you for your continued interest. JM

The Budget Colloquy
Part 3: Whistling Past the Graveyard No More

“Cheaper oil is here to stay, and energy companies need to adjust to that reality.  I do think the industry needs to prepare for lower for longer"   Bob Dudley, CEO, British Petroleum, April 21, 2015

“Investors should brace themselves for more volatility in the oil market, with prices staying around current levels for a while” Rex Tillerson, CEO, Exxon Mobil, March 2015

“Oil prices should reach a long-term equilibrium of $90 per barrel, but it is impossible to predict when prices would return to those levels… Oil prices were poised to remain volatile in the mid-term” Ben van Beurden, CEO,  Shell

“This is my fifth rodeo.  We’re going into a world that’s going to be characterized by lower, gradually rising prices and a lot of volatility.”  The shift for ConocoPhillips away from billion-dollar projects that take years or decades to complete is rooted in a belief that crude prices could gyrate wildly for years to come. Any price recovery in the near term will be modest, as slowing U.S. production helps push up prices to between $70 and $80 a barrel within three years”  Ryan Lance, CEO ConocoPhillips

"We're planning for $60 oil. I think there's still a lot of 'whistling in the graveyard' mentality.… One could hope for $75 oil but you've got to plan for lower." Stephen Chazen, CEO, Occidental Petroleum

“We currently expect oil prices (Brent) to average around $75 per barrel for this year, below the global marginal cost of production due to the current oversupply scenario, and increase gradually towards the $85 per barrel mark over the next two years, as the supply becomes tighter due to the recent cutbacks in capital spending by almost all major oil companies and the growth in demand picks up to more normalized levels”  R.A. Walker – CEO Anadarko

We've assumed prices for 2017 of around $80 per barrel and then a careful rise after that” Eldar Saete, CEO Statoil

Historians will view 2014 as the year in which the historical supply – demand relationship was reestablished for oil.  The shift was driven by a number of factors though the chief reason is technological advance.

On the supply side, proven technologies in horizontal drilling and fracking are unleashing vast reserves of shale oil and gas.  On the demand side, machines that require oil are becoming much more fuel efficient; curbing consumption in the developed economies.  In the new economies of Asia, demand for oil is slowing in those regions, too..

In so many ways the collapse in oil price is a technology story. The result is that price growth from 2007 to 2014, a period in which oil averaged over 100 USD/barrel, can be viewed as an anomaly.  We are now in for a prolonged period of volatility in which the lower prices echo the 20 year period following the oil crisis of the 1970’s.  Figure 1 clearly communicates that the oil price spike from 2006 to 2013 may well be considered just a spike. 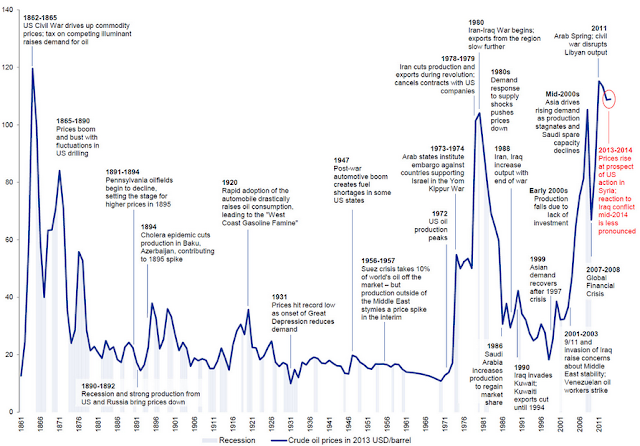 A geopolitical crisis can always change the price equilibrium.  But, as is evident from the quotes that prefaced this post, oil companies are adjusting for a fundamental shift in the present oil economy.  They are cutting staff, and reducing costs to an extent which documents their belief the slowdown is not a short term phenomenon.

Due to our exposure to the oil and gas sector, Newfoundland and Labrador will be particularly hard hit by the downturn.  The province has been caught flat-footed.  The collapse in current oil revenues (i.e. royalties) have had a dramatic impact which is being mitigated by massive government borrowing.  However, as the price remains depressed for longer periods, the reductions in other revenue sources (Income tax, sales tax) will only exacerbate the revenue shortfalls.  Alas, the long term solution is not sustained borrowing.

The oil price collapse has necessitated the requirement to have a serious conversation and an action plan for our future.  A dose of fiscal reality, perhaps, is just what this province needs.

A Record of Stimulated Unsustainability

The Progressive Conservative Government started out with good intentions to manage the new energy fueled wealth.  They began their tenure, in 2004, with a reduction in government spending.  In 2007, they generated a long term plan to shape an energy strategy. Contained within the Energy Plan was a projection for long term oil prices, as shown in Figure 2.

By 2008, the government had forgotten about those long term projections.  They began to make long term decisions based on short term oil prices.  Taxes were cut, government spending was increased by 35%, and infrastructure projects were initiated.  The fiscal policy changes were enabled by peak production and record oil prices, which occurred simultaneously.

In consequence of all this stimulus, the provincial government took a fundamentally strong economy and made it “white hot”.   Salaries were raised at a pace far outpacing inflation. It fueled a real estate boom, and caused an increase in the cost of doing business in Newfoundland and Labrador.  It impacted our long term competitiveness on the global market.

The government’s economic advisor, Wade Locke, said the stimulus was a good thing.

In 2013, it was difficult to argue otherwise.  People were making small fortunes from real estate valuations; new graduates in skill trades and professions could look forward to six figure salaries after a couple years of getting their ‘ticket’.

But, the boom was unsustainable.


The Budget Colloquy (Part 1): Put Him In The Round Boat Til He's Sober

Now, in 2015, it is clear that the government did exactly what it should not have done.

Fundamentally, they initiated stimulus during the boom.  They made long term policy changes, such as increasing the size of the public service, based on a short term spike in oil prices. They implemented major public works projects at the exact time that we were executing mega projects.   The measures contributed to cost overruns on Hebron, and on other offshore developments.  The inflationary impacts will be the cause of lower royalties when those facilities come on line.

Oil and government policy, from 2006 to 2010, initiated an unprecedented boom.  However, it was the stimulated expansion that fundamentally destabilized the long term economic stability of the province.  Now, as we commence a predicted contraction of the economy (i.e. a recession) following the completion of several mega projects, the collapse in the oil price will only serve to magnify all those negative impacts.

Continued Stimulus or Expenditure Cuts?
The prevailing economic thought is to take advantage of low interest rates, and fuel stimulus to “ride out” the economic downturn.

Despite the claim of an “austerity budget” the government is actually increasing spending in 2015.  They are borrowing heavily to fund both infrastructure and for current account (program expenditures).  The 2015 Budget is, in fact, a stimulus budget; it just happens that the stimulus is less than in the previous five budgets!

Or, should the government of Newfoundland and Labrador make long term adjustments to reflect the new oil reality, and to correct the fiscal imbalance?

Based upon the analysis provided in Part II of this series, it is clear to the Author that the government should be basing their mid-term policy on annual revenues in the $6.8 billion range. The Finance Minister is projecting long term spending in the $7.5 billion range. As shown in Figure 3, in the absence of any real reduction in government spending, or a major increase in oil prices, we will be running $700 million deficits for the next five years.

This is the fiscal imbalance to which CRA pollster, Don Mills, recently referred!

To correct it, we must first recognize that we have one.

The government refuses any such acknowledgement.

They are happily whistling past the graveyard. 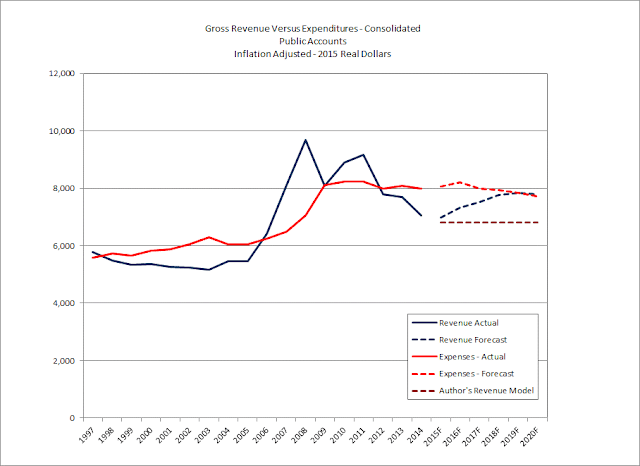 Editor's Notes:
Part IV of this series, entitled “The Refined Charlatan”, will be posted next Thursday.

JM" is a researcher and writer.   he is a frequent contributor to Uncle Gnarley Blog offering analysis of the Muskrat Falls project and other issues, including the fiscal position of the Province. JM's essays include: IN NALCOR WE TRUST, Delusion and Deception (Part III), and The Snow Job (Part I).  The very latest Posts, on the 2015-16 provincial Budget, include IT'S THE SPENDING STUPID and The Budget Colloquy (Part 1): Put Him In The Round Boat Til He's Sober and The Budget Colloquy (Part 2) Revenue Projections: Close Your Eyes, Make a Wish, Hope for the Best.  Having chosen to retain his anonymity, JM is prepared let his articles be judged on the research and argument each contains.
Posted by Des Sullivan at Monday, June 22, 2015