When it comes to recognizing the fiscal imbalance, the political leadership of the province are whistling pass the graveyard.  But government inaction is not limited purely to the deficit.  They are failing to make concrete actions on many of the larger issues facing the province today.

In a nutshell, they default to the “politics of optimism”.


Whether it is the revenues from Muskrat Fall’s or the vast untapped wealth of the Newfoundland offshore, government policy and communications are entrenched in positive hyperbole.  This excerpt from the 2015 Speech From The Throne is an example:
Our government is buoyed with optimism as our people begin to come into their own, enjoying the highest levels of income ever in our history, employment levels that are higher than a decade ago, and a vast array of initiatives that enhance the lives of the oldest to the youngest among us. Our government is managing the affairs of the province responsibly, progressively and sustainably to ensure the incredible gains we have already achieved are eclipsed only by the phenomenal gains that we are about to bring to fruition. Newfoundland and Labrador is stronger today than it has ever been, and we are on course to achieve goals that will benefit our people for generations to come. Our government is filled with confidence and optimism that the prospects for Newfoundland and Labrador, both in the short term and over the long term, are incredibly bright. Ours is a future that knows no bounds, and we shall ever remain resolute in defence of this province we so dearly love – Newfoundland and Labrador, proud and strong.

This is a speech, and a theme, we have heard many times over the past 5 years.

Of course, the politics of optimism is an easy road for any politician.  Difficult issues require tough and politically unpalatable decisions.  It is much easier to talk about future greatness; validating by default present day largesse.

Although we now experience a fiscal imbalance, nurtured since 2006, it can be corrected with common sense, discipline and the ordinary application of restraint.

However, this government have had their heads in the sand with even the bigger issues.

They have not, for example, used the fiscal liberty afforded by offshore wealth to address the single largest issue they inherited; the province’s aging demographic. It is an issue even more daunting than the fiscal imbalance.

Like the provincial plan to return to balance budgets, the recently released "Population Strategy" does a tremendous disservice to the issue. As Figure 1 so effectively demonstrates, the rural Newfoundland and Labrador we picture in our memories is no more.  Instead of young children playing on the shore, or young families building a livelihood on the sea, rural areas will be by 2040 almost 50% populated by seniors.  When you study the projection of youth (0-19) and see how, in 2035, it is nearly the same as in 2016, you can’t help but think that even this projection is optimistic. 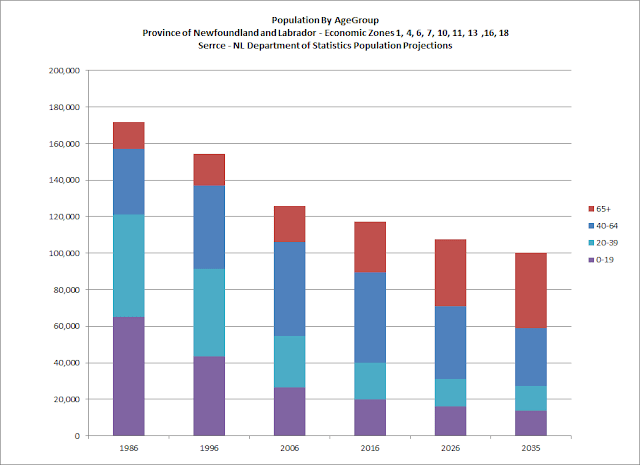 The servicing of rural Newfoundland, and the fiscal imbalance we currently have are undeniably linked. Both are unsustainable in the long term.  But the issue of our aging outports will inevitably be a crisis within the next 20 years.  No extent of government spending will avert this outcome in the majority of rural communities.

Instead of facing the clear reality of the future of rural Newfoundland and Labrador, our politicians and many leaders default to the rhetoric of blind optimism as demonstrated in the throne speech.  They do have their heads firmly in the sand!

The crown prince of the charlatans is none other than Nalcor’s CEO Ed Martin.

The Nalcor head does the province no favour’s when he refers to Newfoundland and Labrador as the next North Sea.  Whether it is his claim to the “new North Sea” or to the amount of revenue that Nalcor will one day provide to the government of Newfoundland and Labrador, Ed Martin has a level of optimism which is not shared by his peers in the industry.
The problem is that the politicians seem to believe him though his proclamations are made without challenge.

Although I fully support Nalcor’s work in deepwater exploration, we should not be making long term policy on 2D seismic, and on exploration wells yet to be drilled.

We need a more cautious approach.

One ought to look to Greenland to understand how a world class oil play can be put on ice after a couple of unsuccessful wells.

When it comes to fiscal planning in the current global oil environment, we need to err on the side of caution.

I suggest we should plan only for the new Bay du Nord discovery and the Hebron oilfield, currently under construction.  Those two new offshore assets might result in oil royalties of the magnitude earned during the period 2008 to 2012.

If oil returns above 100$/barrel, we could have an additional $2 billion in annual revenue in the period from 2025 to 2035.  Beyond this expectation, we should not be counting on any new oil developments.  If they happen: great!

But they should not be the basis of our long term economic policy.

The issue is central to the question I raised in Part III of this Series: should we continue to borrow, and inject economic stimulus from 2016 to 2023, the likely start date of significant royalties from Hebron?

The answer to the “stimulus” question is clearly, NO!

We need to correct the fiscal imbalance now so that if and when the second “oil boom” occurs in this province we will have the ability to build a true “generational’ fund for when the oil runs out.

We must correct the current fiscal imbalance within the next 5 years. That is the only way we can ensure that the royalties from a second oil boom are not used to simply maintain wage growth in the inflated public service, and to service our ever increasing debt.  If we get this second chance, we should use it for the "generational fund" that the current group of politicians love to dream about.

That said, when you examine the aging demographic profile of the province, it is clear any “generation fund” sourced from the second oil royalty boom (2025-2035) will not be a fund in the conventional sense of the Norwegian endowment. Rather, it will have to be used to implement a major resettlement program for the hundreds of rural towns in this province.  Any future generational fund will be simply applied to correcting the impending demographic crisis in rural Newfoundland.

By 2030, the issue can’t be ignored any longer.  We will need the massive oil royalties from Bay du Nord and Hebron to deal with the humanitarian “crisis” which outport Newfoundland will become.  ‘Crisis’ is not too strong a word: I suggest the government and the public are naive if they think otherwise.

We need to plan for that crisis now.  We need to start trading in reality.

The issues at stake are far bigger than partisan politics.