ARE YOU READY TO PAY TO POWER NOVA SCOTIA?

A Tale of Two Regulators

The government of Clyde Wells introduced the Electrical Power Control Act in 1994. It was implemented to define electrical power policy in the province and to provide a means for the utilities to earn a return on their investment in the generation and delivery of the power.  Under the EPCA the Public Utilities Board (PUB) has broad powers to regulate and legislative responsibility for the planning of future power supply in the Province.

It is worth reading the Act to truly understand the breath of powers which the PUB possesses in these areas. This did not occur by accident. On the contrary, the legislation received the very deliberate focus of the premier of the day.  When he introduced the Bill in the House of Assembly, Clyde Wells stated:

Since June 2010, when the decision was made by Nalcor to develop the Muskrat Falls Project, the PUB should have had an integral role to ensure the project met the clear “Declaration of Power Policy” as outlined within Section 3 of the Electrical Power Control Act.

The process of review ran counter to the intent of the 1994 legislative initiative.  Muskrat Falls was conceived in secrecy, and born under both delusion and deception.


The process was neither open nor transparent.  Sadly, it continues to be executed in the same manner.

The people of the province will bear the result of this poor public policy with the predicted doubling of our electricity rates by 2021.

In Nova Scotia another tale can be told.

In 2014 the UARB (Nova Scotia’s version of the PUB) was given unfettered authority to examine and decide whether to approve the Maritime Link Project.  The UARB initially thought the price for the Maritime Link was too expensive and too risky to be borne by the Nova Scotia rate base.  As a result of conditions imposed by the UARB, the Nova Scotia ratepayer now has first priority access to the surplus power from Muskrat Falls, at market rates for the power (shredding one of Nalcor’s rationales for the project - industrial development in Labrador).

Nova Scotia obtained additional assurance with respect to over-runs by imposing the condition that Emera must present and receive approval for any over-runs above the DG3 estimates.

In Nova Scotia the rate payers have benefited tremendously from the UARB.  In fact, the Agency insisted upon delivery of a deal that for Nova Scotia is superior to the one originally negotiated by Emera. It successfully exploited Nalcor’s weaknesses to the benefit of the Nova Scotia ratepayer.

Nova Scotians have truly benefited from the openness and transparency which underpins electricity policy in their province.

Emera subsidiary, Nova Scotia Power, has applied to the UARB for authority to have the NS ratepayer pay approximately $160 million per year in connection with costs associated with the Maritime Link’s completion in advance of the flow of power from the Muskrat Falls Plant.

A recent CBC article incorrectly stated that the UARB’s approval of those costs within the Nova Scotia rate base had already been approved. The CBC was also wrong in asserting that the NL ratepayers “are eating the cost over-runs”.

The fact of the matter is that the UARB must yet decide what portion of the ~$450 million requested by the Emera subsidiary shall be recovered from the NS rate base.  Any amount not approved shall constitute an overrun – which will be shared by both Nalcor and Emera according to the terms of the agreements between the companies.

This is a high stakes application for Emera. The company’s shareholders are exposed to considerable risk if the UARB does not provide full approval of the application. Nalcor, too, could be on the hook for over $100 million dollars  associated with the delay to the Maritime Link.

It is an issue which deserves more careful consideration from the CBC and from other news media.

In their application, Emera has outlined and attempted to quantify the potential benefits to the Nova Scotia ratepayer with the early commissioning of the Maritime Link.  These are outlined under four broad categories:

In support of its application, NS Power has forecast that over 2 TWh of energy will flow over the Maritime Link from NL between January 1, 2018 and December 31, 2019.  They have estimated that the energy will have a value in excess of $120 million (i.e. 6 cents per Kwh).

In this province, we need to ask: prior to Muskrat Falls generation, where will this 2 TWh of energy come from?  Undoubtedly, this energy must be that associated with the remaining RECALL from the Upper Churchill project.

This likely source raises many interesting questions. They include:

1)      Can the Maritime Link be put into service without the Labrador Island Link (LIL) and the transmission interconnection between the Muskrat Falls and Churchill Falls plants (LTA)?
2)      If the LIL and LTA are put into service, will Nalcor make a similar application to the NL PUB to have the cost of an early commissioning of the island transmission assets included in our rate base prior to the commissioning of the Muskrat Falls Plant?  Will our rates start increasing in 2018?

4)      What charges is the Newfoundland ratepayer expected to pay on the LIL in 2018 and 2019, associated with the Labrador Island Link?

5)      If this 2 TWh of energy is delivered to Nova Scotia, will Nalcor effectively give it to them, or will Emera pay market value for this energy?

6)      Who will get priority access to this RECALL energy, the NS or the NL ratepayer?

7)      Is it possible to purchase additional Upper Churchill energy to effectively displace oil generation at Holyrood and lower our rates in NL?

8)      If the Labrador Island Link is commissioned early for the primary benefit of Nova Scotia ratepayers, why would NL ratepayers be expected to pay for it? 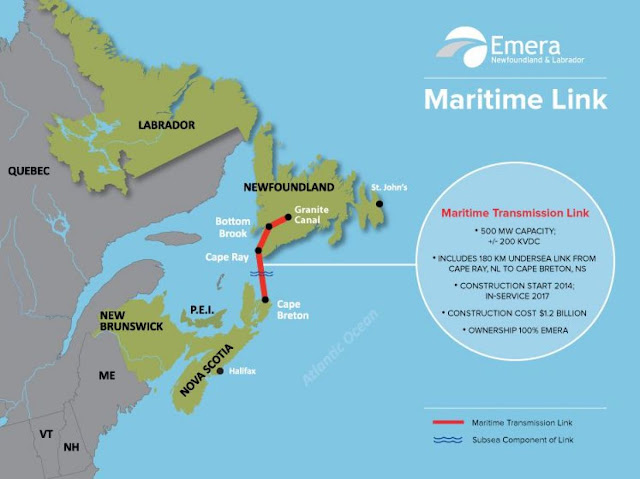 The UARB decision will have a significant impact on Nalcor and, indirectly, on the NL ratepayer.  Nalcor would likely prefer to commission the Labrador Island Link early and provide RECALL to Nova Scotia, in order to reduce the portion of “unapproved over-run” from the UARB.

But what is best for Nalcor, may not be best for the ratepayers of the province.

In the current PUB process, Nalcor has not provided any guidance regarding the use of RECALL to meet our increasing demand, or even to displace oil generation at Holyrood. Nalcor has provided little guidance about where 300 MW of power can be imported from Nova Scotia, or if any RECALL power can be used for the province before or after Muskrat Falls commissioning.

Experts presenting to the PUB have recommended, in the absence of Nalcor’s guidance, that plans should be implemented immediately to secure an additional combustion turbine to ensure adequate system reliability prior to Muskrat Falls.  Request for Information “PUB-NP-314.pdf” contains this citation:

Nalcor has not yet shared their plans for RECALL power with our PUB. However, in preparation for Hearings presently scheduled by the UARB, Nalcor and Emera have filed confidential exhibits concerning where and how the 2 TWh will be made available to Nova Scotia at the end of 2017.

Unbelievably, the UARB is privy to information pertaining to positions taken by our Crown Corporation, related to RECALL power, which our PUB has yet to see!

Nalcor are trying to reduce their own corporate exposure to Emera. We need to know if what suits Nalcor is in the best interest of Newfoundland rate payers.

As Muskrat Falls enters the mid game, it is becoming obvious that Nova Scotia is the primary beneficiary of the Muskrat Falls project.  The projects represents a terrible deal, one in which NL takes the majority of the risk and Nova Scotia reaps the upside.

It will be a sad day in 2020 when the LTA, LIL and ML are commissioned, and the RECALL power passes by the blasting smoke stacks of Holyrood, to supply green energy to Nova Scotia.  All the while, within our rate base, we will be paying Emera their return on equity on the LIL - so that the line can be primarily used to deliver energy to Nova Scotia.

The time is now to open the doors of NL Hydro. We need the PUB to examine those issues, just as the UARB is doing for Nova Scotia.  Nalcor has obfuscated the truth on this project since its inception.  In the backdrop of delays to Emera, $800 million dollar over-runs to Astaldi, and a 2-year delay in the project schedule, the PUB needs to determine what else lurks behind the closed doors of our Crown owned utility.

Nalcor are in a very difficult position.  I am sure they believe they are acting in the best interest of the province; as an early inclusion of the LIL into our rate base may mitigate some of the rate shock associated with the project, and reduce some reliability related investments.   However, what is certain is that the NL ratepayer deserves to have the same openness and transparency as they do in Nova Scotia.  There must be some recognition that we are the ones who are paying for this great Albatross of the north.

It is both ironic - and depressing - that the Labrador Island Link will be built, and likely used to import Upper Churchill power to both NL and NS, long before the plant at Muskrat ever produces electricity.  It is unfortunate that Nalcor denounced that as a practical option for our power supply back in 2012, even though there were many who considered it the least risk and least cost option at the time.
Posted by Des Sullivan at Monday, February 27, 2017