Introduction
Just when you thought the incompetence couldn't get any worse at Nalcor, along comes another scheme to up the ante on deceit and dumb.

This blogger has just learned that Nalcor lost $66.9 million following management's decision to place a bet of $1.82 billion - public money - in the “futures” market.

Nalcor even tries to put the blame on U.S. President Donald Trump.

To add insult to injury, Nalcor and the Ball Government did their best to cover up the failed scheme.

The losses occurred in May of this year. An eagle-eyed Nalcor watcher, able to parse Nalcor’s most opaque assertions, brought the contents of the corporation’s last quarterly financial statement to my attention.

How the money was lost, and the risky financial tool employed, is not an easy subject to explain. The “futures” market is an arcane world in which a great deal of expertise is needed to play. Still, most people understand what it means to speculate. And many of them understand the sting of loss. Of course, most people play with their own - not public money. 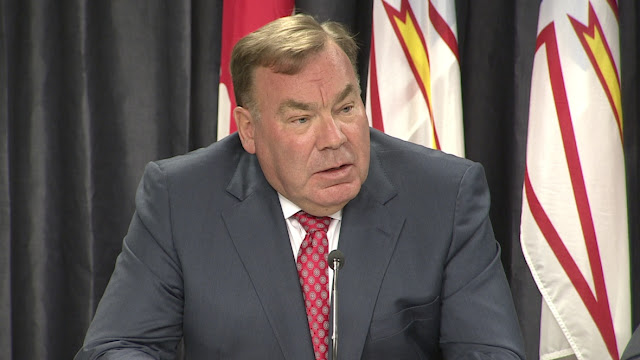 But the financial loss Nalcor experienced is so large, and the behaviour of those involved too circumspect, to allow it to be buried simply because it is complicated.

Let me attempt to explain how the $66.9 million disappeared.

Introduction to the “futures” market


Following approval of the “additional” Federal Loan Guarantee of $2.9 billion for the estimated $12.7 billion Muskrat Falls project, Nalcor completed the debt financing in May 2017. Then, by its own admission, the corporation “entered into bond forwards totalling $1.82 billion on May 12, 2017 to hedge the Government of Canada (“GOC”) benchmark bond interest rate exposure...” The hedge period ended May 18, 2017. Why Nalcor felt it needed to engage in such a high-risk strategy is far from clear.
Nevertheless, like most things touched by Nalcor, the scheme failed.
A “bond forward” is a “futures” contract. Futures are commonly traded by hedgers and speculators to take advantage of price movements in a commodity or a financial instrument, like a bond. Traders in futures attempt to lock-in the price of a commodity — today — at a price offered at a specified future date: hence the term “futures”.  Bond traders use the futures market to employ hedging strategies to protect the value of their bonds against market volatility — as well as for speculative returns.


A miscalculation can be very costly if speculators find themselves on the wrong side of a trade — as Nalcor learned.  For example, a miniscule drop in the interest rate — yield — on a bond can negatively affect the value of that bond when the parties settle up. Gains/losses on bond futures — or any futures trade — can occur within hours or even seconds, subject to the vagaries of the market. Nalcor’s loss of $66.9 million in just six days defines the risk of a hedging strategy better than any example I might offer.
If you remain unclear about what has occurred, imagine that you have just sold your house and someone tells you that you might make a better return on the proceeds if you put it on a bet. That's what Nalcor did.

Who is minding the shop at Nalcor?
Futures contracts are so risk-laden, that any decision involving $1.82 billion — or even a fraction of that sum — would require the express approval of the company’s CEO.


Of course, Nalcor possesses no bond market expertise, and certainly none in the business of trading futures. Trading on this scale may be done by international oil giants like Exxon Mobil — which might also want to hedge against currency risk — but that is the business of private companies, who employ the expertise. It is not a business for governments.
No responsible CEO of a government owned corporation — if he understands risk — would gamble with such a huge amount of public money anyway.

Financial Community Aghast
Aspects of this failed hedge have raised the eyebrows of some in the financial community who were consulted by this blogger.


One expressed surprise that the financial officers at Nalcor were persuaded that they needed to hedge those bonds for just six days when ‘normal business risk’ might have been employed given the short period of the hedge, the huge amount of capital at stake, and the risk of major loss.
Another wondered why such a high-ratio hedge was necessary: $1.82 billion on $2.9 billion. Indeed, the high ratio raises a red flag on the whole transaction. He suggested, too, that Nalcor should be asked to disclose the fees recorded on the transaction, and other questions, too, apart the unwarranted risk to public money.
For example...

Did incompetent Nalcor executives take it upon themselves to engage in such a speculation?
Did their inexperience allow them to be mislead by an unwise and avaricious broker or banker?
Was the $1.1 million which Nalcor said in the quarterly statement could be “recognized immediately” the amount of the fees received by the broker in the transaction?

When did Stan Marshall find out about the speculation and the loss?
Did he authorize the transaction?

Nalcor attempts to explain loss in private email to one person

Nalcor offers one reason for entering into the hedging strategy, and another for why it failed.


First, Nalcor stated in answer to questions from the private citizen who had parsed the financial statement that in the same week, “as the MF bonds were to be priced, there was also a GOC (Government of Canada) long bond issuance planned. Historical analysis had shown the rates on the GOC benchmark bonds often tended to rise over the weekend prior to long bond issuances, and putting bond forwards in place would help mitigate this risk.”
The phraseology is its own proof that Nalcor willingly engaged in the speculation.
Then the Crown Corporation tried to put the blame on Donald Trump.
The Nalcor email reads (with bold added):
“As a result of Trump/Comey headlines over that weekend and the related financial market uncertainty it created, the underlying GOC rates actually decreased between May 12 and May 18, resulting in a lower coupon (yield) rate on the bonds and a hedge payout of $66.9 million.” (Here, “hedge payout” is Nalcor’s code for the $66.9 million loss it took on the transaction.)
In other words, market volatility over that six-day period drove down the coupon rate — blowing through even the low interest rate which, just a few days earlier, was commanded by the federal government’s loan guarantee.
Of course, experienced investors know that ascribing reasons to losses in the bond market, as in the stock market is, at best, a mug's game. Given all the issues which influence trading over the course of a minute, an hour or a day, no one ever really knows why a move occurs.
It is irrelevant anyway.
Nalcor fails to inform public
Most of us know President Trump is a fool. High risk speculation with public money begs the question: is Stan Marshall a bigger one?
The issue goes beyond the financial — though it is hard to countenance the loss of so much money, especially when billions have already been squandered by Nalcor on the Muskrat Falls project. As always, when public money goes missing there is the issue of accountability.
When $67 million is lost — when 3.68% of the $1.8 billion hedge evaporates in just six days — one might expect that Nalcor has an obligation to inform the public.
If not the public directly, the Corporation certainly has a responsibility to inform the Minister of Finance (then Cathy Bennett). Given the sum lost, the Premier should have gone in front of the microphones.
Evidently the sum wasn't large enough to warrant his attention. But Cathy Bennett or Siobhan Coady should have been expected to inform the public if he wasn't up to it.
We don't know if the decision was taken by a rogue official at Nalcor, or if management (i.e. CEO Stan Marshall) approved the speculation.
We don't even know if Nalcor informed the Finance Minister or the Minister of Natural Resources.
We only know that neither the Premier nor a Minister told the public. And Stan Marshall stayed silent, seemingly happy to have the whole affair buried.
Nalcor's response: Obfuscation
Nalcor did its best to obfuscate the loss even when it was obliged, by accounting rules, to make the disclosure in its quarterly financial statement. The statement was released on August 14, 2017 - making that date the first time the public was given notice that the new monies had been raised under the additional Federal Loan Guarantee.


Indeed, most of the accounting and investment community in the province would be hard pressed to figure out what Nalcor was reporting given the advisory was sanitized. See the excerpt from page 12 of the Quarterly Report below:

In addition, the Nalcor PR machine completely omitted reference to the failed hedge and the $66.9 million loss in its Press Release announcing the “highlights” of Nalcor's second quarter results — though it found ink for far less important matters!

When the press statement got to the $2.9 billion additional federal loan guarantee, Nalcor mentioned not a word about the egregious loss of public money. The release was simply limited to this innocuous comment:

Reference to the $66.9 million loss is nowhere to be found!

The first response of the Ball Government ought to have been to send some people, very senior, packing. If he authorized the scheme, the list of persons fired ought to have included CEO Stan Marshall himself.

If the decision was made by a rogue executive, by now we should have heard to whom indictments were issued!

Being forthright with the public has long been absent from Nalcor’s — and the Government’s — agenda. With the Premier’s acquiescence, Stan Marshall has done nothing to change what former CEO Ed Martin entrenched long ago.

Wasn't the Nalcor Board given a new Chair? Do the new Board's Members understand their obligations?

Nalcor's arrogance and incompetence has been exposed again.