James L Gordon, like many hydro engineers all across Canada, is fascinated by the ins and outs of the Muskrat Falls project.

His latest observations to me focus on the four reports issued to date by the Oversight Committee on Nalcor’s performance as compared to their Project Schedule.

It shows, as expected, slower progress in the 5 winter months than in the 7 summer months.

This indicates a winter progress at 44% of the summer rate, about what can be expected under the winter conditions in Labrador near Goose Bay.

Hopefully, this is the worst case scenario.

As the yellow line on the graph shows, it would take a 20% increase in the project production rate to achieve a December 2018 completion date. 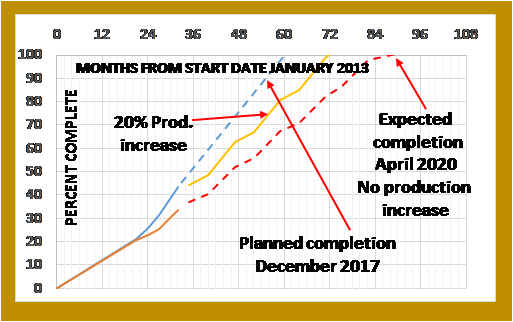 The foregoing is from Jim Gordon himself – allow me to add a few more points.

Mr. Gordon’s analysis is consistent with the fact that the critical “River Diversion” operation due to be completed by May 2015 has been pushed out to October 2016 – a delay of 18 months.
The river diversion operation involves the closing of the present channel of the Lower Churchill River at the Lower Muskrat Falls and the diversion of the river through a completed and fully operational Spillway complex.

Until the river is diverted through the completed spillway in this manner, work cannot be started at all on the North concrete dam that is supposed to stretch between the powerhouse/spillway and Spirit Mountain – and that’s the project’s “main” dam.

In fact to maintain the project schedule, construction of the North Dam was supposed to have been started by May 2015 – now delayed of necessity to October 2016 (after river diversion).
Now moving from lack of information to “misinformation” or as Minister Kent would say “misspeaking”, we should note that  last week Ed Martin stated swaggeringly in front of a group of media on the Muskrat Falls site that – “The Spillway – it’s done .”

If so, why is Nalcor not starting the diversion of the river now; why the delay till October 2016?
Because, in spite of Ed’s reassurances, the Spillway is decidedly not finished – far from it.

The concrete part of the gate system maybe finished but there are still no steel gates or other water flow control features installed ; this alone will take a minimum of 6 more months and even if that “piece of work” was started right away, Nalcor would still miss the  optimum late winter 2016 low river level construction window.

And apparently there’s a few more (as in very many) buckets of concrete still left to be placed to line the spillway chute from the control gates down to sea level below the falls .

But in any event, missing a key milestone by 18 months?

Most of us have had enough experience with some sort of construction to immediately conclude - Holy Smoke this means we will need some serious extra cash over and above the cost over runs announced to date (which only cover what’s accumulated to August 31,2015).

Unfortunately, given the very incomplete information released by Nalcor, moving from that chill in the spine feeling to clarity as to the true damage is not that easy.

Because sometimes missing one particular project schedule milestone can have expensive “knock on “ effects on other parts of the project.

Engineers try to pinpoint these critical “choke points” by something they call a ”critical path” analysis.

In the good old days, a large printout of The Critical Path would be spread along one wall of the project office , an ever present reminder of the need to keep everything on schedule – any failure to do so meant extra costs.
Got to be a Muskrat Falls critical path diagram out there somewhere – although must admit, I have talked to one very senior Muskrat Falls Project Manager who swears in the years he worked on the project he never did see one and questions whether one really exists – unlike any other project he has ever worked on.

I kind of find it all hard to believe  – it’s probably buried somewhere deep down in Nalcor’s Blue Bunker on the Crosstown Arterial  in St John’s -- accessible only by Ed M and  Gill B and a small group of trusties – something like the Enigma Machine – eyes only - by now it’s been revised more times than Nalcor’s executive bonus formula.

So - What we really need is both Nalcor’s “as sanctioned” critical path diagram from December 2012 and their latest version.

Maybe then we would be able to start zoning in on how big a problem we face.
Posted by Des Sullivan at Monday, October 05, 2015