Last week’s meeting of the Public Accounts Committee (PAC), which did little more than allow a few questions to be raised about the Humber Valley Paving affair (HVP), featured former Transportation and Works Minister, Nick McGrath, the Clerk of the Executive Council, Julia Mullaley, and the former Deputy Minister of Transportation and Works, Brent Meade.

Following their testimony, the public might have been left with the impression the claim, by Premier Tom Marshall, that he was not informed of the Minister’s intention to cancel the HVP contract, was all one big misunderstanding.

We are left to consider that the unwarranted assumption by Meade was just an error; that we should not consider if he was providing a fig leaf to Premier Marshall, or whether senior public servants have rules for protecting themselves against arrant Ministers.

I suggest you not make any such assumptions.


Personal experience includes eleven years of interacting with Cabinet Clerks and with Deputy Ministers. Admittedly, that was a long time ago. But, I suggest the “rules of the game” have not changed, even if Clerks and DM’s have.

Senior bureaucrats know what they must do when Ministers conspire to misbehave.  Such behaviour includes making decisions which are legally suspect, and those which diminish the Government’s integrity (or, as in this case, what is left of it).  Suggestions the equivalent of 'I thought the Premier had been informed’, asserted by Meade, don’t make the cut.

Not playing by the rules of the game does not suggest the game has no rules.

Of course, when rules are broken the expectation is that the Premier will mete out consequences. If none are forthcoming, the presumption is the Premier either runs a loose ship or those same public servants might have helped the Premier out of a nasty political problem.

Public servants ascend to the rank of Clerk of the Cabinet not because they lack astuteness, are timid, or dumb, but for reasons quite opposite.

Similarly, Deputy Ministers, by and large, are careful managers. They are appointed by the Premier. They answer to him, not to the Minister. 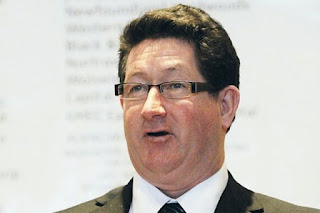 Most Deputies are capable of navigating Ministers, especially the dull hyper-partisans. Nick McGrath was easily one of those.

Government is not normally a circus, either.  Ministers don’t get to make $19 million decisions completely on their own, a fact to which Julia Mullaley, the Cabinet Clerk, attested, even if her evidence seemed incomplete and contrary; she having described the Premier's reaction to McGrath's decision as manifesting “upset”.

Minister Nick McGrath told the PAC he did not inform cabinet. He said, "I just didn't do it. I had accepted the responsibility as a minister and I felt I was within the realm of my responsibilities and duties as a minister. It didn't seem important to me at the time."
Nick McGrath is not believable; he never was.

But his testimony serves to connect the evidence given by the Clerk and the Deputy Minister.

Brent Meade said, he assumed that the former Premier and the Cabinet were in the loop.
He stated, “the Clerk was not informed…and the reason is the context….I had a call from one Minister and an interaction with my own Minister, the fact that I was having the conversations outside the Cabinet Room and because I asked those questions: should we move this up the line and are you aware of the political sensitivity and the responses I received I was of the belief this issue had been discussed in Cabinet.”

Brent Meade relied on what he calls “context” and conversations with the Minister. Evidently, he did not actually ask the Minister the pivotal question: did you inform the Premier?

If on no other point, one would think that Meade would have been alarmed when McGrath told him to "move on it today," and "not to worry" about any political fallout. Any dolt would have foreseen the political consequences, knowing on whose behalf the decision was taken.

When the PAC asked him if he informed the Clerk, the Deputy said: “you see the Clerk because you need to seek…authority… (and) “in this case the Minister had clear authority”.  The second reason (to see the Clerk) was to inform the Premier…because of the circumstances of that day…it was my belief the Premier was aware of this decision…so, no, I did not notify the Clerk on the 13th of March.”

Meade said he reminded Nick McGrath of the "political sensitivity" of Coleman's involvement.

So, Meade clearly understood the gravitas of the issue.

HVP BOND ISSUE: THE MAKINGS OF A SCANDAL

The relationship between Deputy Ministers and the Clerk is well understood. Deputies know their very careers are on the line, if they embarrass the Premier or bring the Administration into dispute. If a Minister is being dumb, he will warn the Premier via the Clerk, or directly. In this case, he “makes a judgement call” not to warn the Clerk.

Meade wants the PAC to believe he would discard his career in favour of an assumption arrived at, not by virtue of the questions he asked the Minister, but as a consequence of the geographic location where the two spoke, i.e. outside the Cabinet room.

Not just common sense, but ‘the rules of the game’, dictates that the ‘astute’ Deputy would rise from his chair, having arranged to see the Clerk of the Cabinet, on an urgent basis, and head for the elevators.

He would feel relieved that the “problem” would soon be placed on the shoulders of a more senior bureaucrat; one enjoying a higher pay scale and the Premier’s frequent ear.  After all, no Deputy gets fired for having discharged their duty.

What about the Clerk’s testimony?

When asked how Tom Marshall reacted, Julia Mullaley said:
“From my perspective he was quite upset," because the decision was a “significant issue”, one that was in the category of “requirement” to go before cabinet.

The Clerk mentioned all the words that give the matter gravitas: “upset”, “significant issue”, the “requirement” for a Cabinet decision. 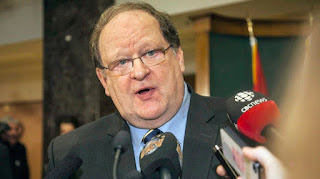 Did any consequences follow from Premier Tom Marshall’s insistence he was not informed?

The Clerk was not fired…even though the Deputy’s failure may easily have been seen as her failure, too.

The Deputy Minister was not fired or even demoted.

He is still a Deputy Minister.

The Minister wasn’t fired. (He didn’t quit until Premier Davis told him to quit or be fired, following the A-G’s report.)

So, there were no consequences following one of the most serious, crony connected, conflicts-of-interest ever recorded in any Government of this Province. In fact, a stronger Auditor General might have acquainted the RCMP with the file.

Strangely, Terry Paddon wrote in his Report that the transportation minister "knowingly withheld information" from Tom Marshall, regarding the contract’s cancellation. He offered not a shred of evidence to support the claim. On the contrary, the former Premier went so far as to state he supported Nick McGrath’s decision.

This is not the reaction of a Premier "upset'.

Perhaps, Julia Mullaley's observations, like those of Brent Meade, were not so astute after all.

I suggest the senior public service took a big hit during this meeting of the PAC.