P3s: GOVERNMENT NOT READY AND THEY ARE NOT RISK-FREE

If the Provincial Government proceeds with Public Private Partnerships (P3s) and Alternative Service Delivery (ASD) models to provide infrastructure and services, the public will need to understand this approach is not risk-free.

What might that risk be? It is that the returns from P3s will reflect the worst of what the public service and the private sector, combined, have to offer.

To begin with, the suitability of the P3 service model should not be defined either by NAPE or by the NL Employers Council, who are on opposite sides of the issue.


NAPE is concerned that government will diminish its size, which is already under threat. It doesn’t fret about bloat or that the bureaucracy has been diminished by a bevy of overpaid consultants who rob them of opportunity and advancement. NAPE should be the biggest booster of a stronger Public Service Commission, but it isn't.

The NLEC is preoccupied with growing new private sector opportunities for its membership; a group that, by now, should be wondering if they have anything to offer, having mindlessly chosen to boost, some by their silence, the worst state-owned enterprise idea imaginable, the Muskrat legacy project.

A more immediate concern, however, is whether the government knows it is not ready for P3s.

A Study conducted for the NLEC, entitled WHY WAIT IN LINE? by Professor Tom Clift and Dr. Tom Cooper, indicates the authors have thought about government readiness. That is a hopeful sign, because it means government might get more reminding.

Public-Private Partnerships were once thought merely a way to procure public infrastructure; buildings, roads, and bridges, without increasing balance sheet debt. They employ a “design build” model; one relatively simple, when the rules are clear, and access to open competition is assured.

In more recent years, P3s have been used to finance and manage a plethora of services from senior citizens homes to hospitals and even prisons; both the infrastructure and its operational purpose. This is a far more complicated model; one that is given caution by Messers. Clift and Cooper, who propose a “step by step” approach because, as they state, what has worked in other jurisdictions may not work here; though I think they are chiefly, and sensibly, advising both business and government to ‘walk before they can run’.

In addition, the pair suggest services suitable to P3s are ones in which risks and rewards are most easily quantified, such as: motor vehicle registration, low risk transactional health services, construction & facility maintenance, diagnostic imaging, alcohol sales, IT, long term care facilities, among others.

Even in those areas, government will have to address its internal management capability, if the public interest is remains paramount.

But nothing is for free; the essential underpinning of private capital is reward.

The underlying assumption of P3s is that private management, inspired by profit, can achieve this objective, perform the service effectively, and give the "client" savings, too.

The debate over the presumption of savings is an important issue; even if it seems irreconcilable. This is, in part, because of the absence of a reliable methodology for determining if P3s are worth the bother. Even in the case of the simple “design-build model”, there are wide discrepancies as to the appropriate premium for the "risk shouldered by the private partner…", as a Globe and Mail article noted.

The newspaper also suggested it was a "concern highlighted by Ontario’s auditor-general". That province has embraced P3s to the tune of billions of dollars since the late 1990s. They include hospitals and Toronto's Highway 407.

Of course, no metric or “test” will convince those who are ideologically opposed to profit.

Local blogger, Hans Rollman writing for the Independent, took the gloves off last week in an effort to discredit P3s.  He cited, as proof of their failure, a 31% increase in the cost of the Adult Basic Education program, a decision by an Ontario Hospital Group to cancel outsourcing medical equipment sterilization, and even a Report by the left leaning Canadian Centre for Policy Alternatives.

There have been failures. Indeed, like P3s and exclusively government programs, there are losers among private companies, too. But the push towards P3s, especially in Ontario and B.C,. who have more than two decades of experience with P3 and ASD models, suggest they have a value worth mining.

Ideologues, and Hans seems to be one, don’t see that the system, as it currently operates, is not working. They don’t accept either, that the public service we now know will be unrecognizable in just a few years. It it is not sustainable.

That is one reason the private sector might have a a partnership role, if the balance of risk is not placed entirely on the Government.

But there is good reason for the qualification.

The Department of Transportation and Works, for example, should be a poster child for the professional public service. The department has operated for decades on the periphery of the P3 concept, as government’s infrastructure builder, and as administrator of the Public Tender Act. It relates to a bevy of professionals in many disciplines, writes tender specifications, performs contract administration, engineering, and most importantly, inspection functions.

With its professional and technical staff, it should be a beacon giving guidance to government, boasting rigid systems for management, quality control, project schedules, and financial management. It should be a font of skill and advice on how best to manage P3s.

But there is no capacity here. There is only embarrassment, and not just due to the Humber Valley Paving fiasco.

Recent examples offer proof: the Waterford Valley High and Roncalli cover-ups in which students were placed at risk, and oversight proven faulty. The steel skeleton of the new Virginia Park School has already cost $12 million, due to botched management in the department; a finished school, or something close, should be gotten for that amount.

The ruts in the Outer Ring Road are what some engineers call the “gift that keeps on giving” – to private contractors. Even a new asphalt surface, properly installed, will never last because the road bed was incorrectly built, in the first place.

When the department needs to save money, inspectors are not replaced and inspections are curtailed. Neither does the system promote a culture of independent oversight when “writing up” the contractor brings fear of reprisal, and when there are no restrictions on key people, including inspectors, working for the department one day, and for the contractor the next.

If the same competence and culture is what will oversee P3s, their failure will be swift and their cost to the public purse significant.

How many other departments operate as does Transportation and Works?

It is easy to see why the status quo is unacceptable. Government will never be more than a place of mediocrity unless rigorous steps are taken to make the public service a fortress of transparency, thrift, diligence, and professionalism.

The big budget game of service provider, in which the private sector is let in, will give new urgency to the public service to do better at what it is supposed to do best.

P3s are serious and long-term relationships. Their success is predicated on the private partner operating within clearly defined agreements that set out quantifiable performance standards; a process that also requires proper monitoring. 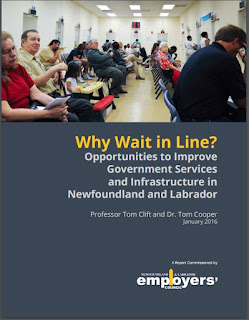 In short, it is government’s job to extract from P3s everything to which the private party contractually promised.

Open competition, and not just to locals, is mandatory. P3s, either in their original design and award, or operation, must not be part of a political patronage system, as public works often are. In other words, if the Government wants an unprepared and under resourced bureaucracy to handle the public part of P3s, don’t even think about it. It won’t work.

Possibly, that is why Tom Clift and Dr. Tom Cooper propose a governance structure and the “need to have an independent entity within the government, akin to a function such as the Auditor General, responsible for developing and implementing ASD and PPP models.

Hopefully, they were thinking of an agency far stronger than our “pussy cat” A-G. But, I get their point.

The question is, does the Government get it, too?
Posted by Des Sullivan at Monday, April 04, 2016