When Astaldi demolished the half-built dome, I just could not understand the reason for their decision. Now I know!

All hydro projects built in Northern Canada are constructed with heated and illuminated, insulated fabric enclosures covering all concrete work, sometimes with a small high-speed crane at the top to transport concrete buckets and skips of re-bar. The enclosures provide an excellent 24-hour, 7 days per week work environment, greatly increasing productivity.

With the release of the EY interim report, they mentioned that remuneration for the work undertaken is based on man-hours. Page 9, part 5.8, states –“However, the payment mechanism is based on person-hours expended rather than m3 of concrete poured.” This is a recipe for disaster, since the contractor, Astaldi, can increase remuneration and hence profit, by increasing staff.

This payment method contradicts the statement by Ed Martin at the 2015 annual general meeting wherein he stated “We gave Astaldi the quantities …. They get a unit amount for every bit of concrete that they install. So it’s called a unit rate contract”. Both interpretations of the contract are likely to be partially correct.

However, all labor, according to EY, is paid per hour worked. This covers all labour blasting and crushing rock for the concrete sub-contractor, all labor involved with building forms, installing the re-bar, pouring the concrete, and building a heated enclosure over the wet concrete. After the concrete is set, labor will dismantle to enclosure and formwork, and start again on new formwork. Hence, Astaldi has no incentive to optimise the use of labor, quite the opposite.

Astaldi then demolished the dome with the consequence that more labour had to be hired to shovel snow, remove ice with propane torches from re-bar and build small heated enclosures over each wet concrete pour. They are smart – not stupid.

Another statement by EY includes a chart on page 11 (shown below) showing the percent completion of each contract as of end December 2015. There are ten contracts listed, with progress ranging from 92% for the Labrador transmission line to 5% for the Island transmission line. Six contracts have a progress between 31% and 40%. For an overall progress, these ratios need to be weighted based on estimated contract cost, which is not available, but should be divulged so that an accurate assessment of progress can be made. 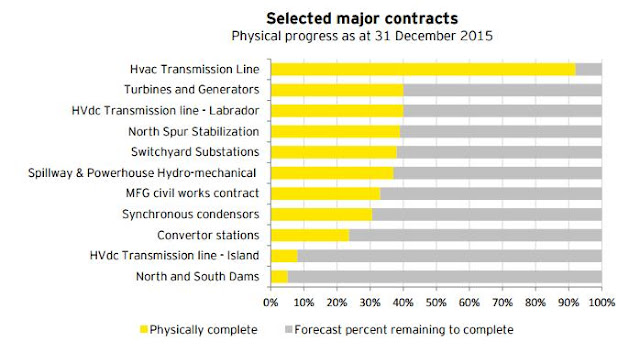 The average progress for the 10 contracts is 34.7%, for 36 months of work from January 2013 to December 2015. With weighting, the overall progress is likely to be in the region of 36% or less, due to the low progress on the large Island transmission contract. This works out at a progress of 1% per month since work started. Hence time to completion is 100-36 = 64 months (5 years and 4 months) for a completion date sometime in April 2021! 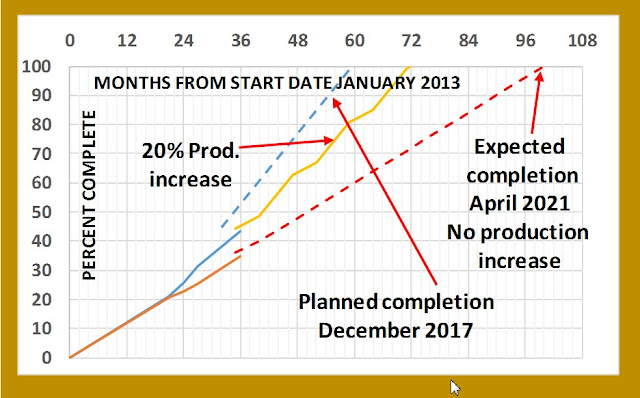 Turning now to project costs; the Newfoundland and Labrador budget has just been released, to include a “Muskrat Subsidy” on all taxpayers. This may have to be paid for many years if the cost continues to escalate. Studies have been undertaken by the World Bank on hydro cost escalation during construction, (Paper #61, Geological complications and cost overruns: A survey of Bank-financed hydroelectric projects) and it was found that a cost increase in the order of 40% was not unusual, and occasionally a larger escalation can occur.

If the initial cost of Muskrat was in the region of $7B, then a 40% increase would result in a final cost of around $10B, including interest during construction. With the hybrid general contract, the large cost increases provided to date, with the project less than 36% complete, and the serious delays in the schedule, I suspect that this cost will be easily exceeded

Hope I am wrong.

Editor's Note:
During a career spanning more than six decades, James L. Gordon has worked on 113 hydro projects, six of which received awards “for excellence in design” by the Association of Consulting Engineers of Canada.

Engineering projects have taken him to 15 countries; he has served for 9 years as Vice-President Hydro, Montreal Engineering, practiced as a private consultant, served on a number of Review Boards, including for Newfoundland and Labrador Hydro, authored or co-authored 86 papers, and wrote multiple columns published by Hydro Review Worldwide.

His professionalism is unassailable; his contribution to the discipline of civil engineering, especially in the hydro field, is simply vast. The Uncle Gnarley Blog is indebted to him for his contribution to our understand of many complex issues relating to the Muskrat Falls project.
Posted by Des Sullivan at Monday, April 18, 2016