When the "expert witness" for Newfoundland Power gave testimony to the PUB on April 4, 2016, in support of Newfoundland Power's (NP) General Rate Application, one part of the evidence was disturbing in its clarity. NP is seeking a rate increase with effect from July 1, 2016 of 3.1%. If granted, the increase will up NP's return on equity to 9.5%.

This piece will not deal with whether NP's Application is reasonable in its entirety. Of interest, here, is the Utility's claim to a risk premium and its rationale justifying the higher return. Roughly a third (0.9%) of the proposed 3.1% relates to this demand.

Readers may recall that prior to Muskrat Falls sanction some people, including this Blogger, suggested the Province's electrical distributor should weigh in on the debate over Muskrat. Newfoundland Power stayed mum. But since DARKNL, NP has expressed a flood of concern, and with an urgency larger even than a Spring freshet on the Lower Churchill.

The Company has belatedly discovered that its financial interests are threatened by Muskrat Falls. Newfoundland Power decided to join members of the 2041 Group and others, to support a request for an expanded Terms of Reference of the PUB's Inquiry into the cause of DARKNL.

At issue, among other things, is reliability and security of the electrical supply from Muskrat Falls, recognizing that Nalcor proposes to shut down the Holyrood generation capability, and that the Labrador power will be delivered over an 1100 KM. transmission line.

Said NP in its Submission: "the eastern part of the system (the North East Avalon) is also the location of the largest and fastest growing loads. Following the commissioning of the Labrador in-feed....it is not clear how long-term reliability and security of power supply will be maintained at that time".

There is the matter of "technical uncertainty" and NP has invoked the problem of rural population decline, too. But Newfoundland Power has another concern; something called "demand compression".

The Utility expects that the high cost of Muskrat power will reduce electricity sales and thereby increase the Company's capital risk. Low electricity consumption will reduce NP's revenues and profitability. The Company wants to be compensated for that higher risk and it wants that compensation to start July 1st.

NP acknowledges there is only one source of revenue. Compared with populous Ontario, which refurbished the Darlington Nuclear Plant at an enormous cost, this Province has only 300,000 ratepayers to shoulder the $9.05 billion financial burden of Muskrat Falls.

While the assertions are self-serving for NP, the Company is a credible entity and offers, at least, the value of perspective; whether one agrees with it or not.

The following is from pp. 18-20 of the PUB transcript wherein Mr. Ian Kelly, representing the PUB, is examining Mr. James Coyne V-P Concentric Energy Advisors; a Consultancy. He is an "expert witness" representing NP.

You might note that the cost and risk which the "expert witness" describes is actually your cost and your risk, too, as ratepayers. Don't race past the top of page 20. You won't want to miss a word: 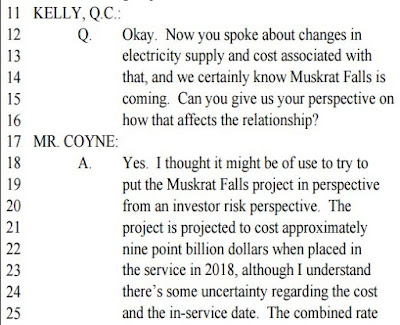 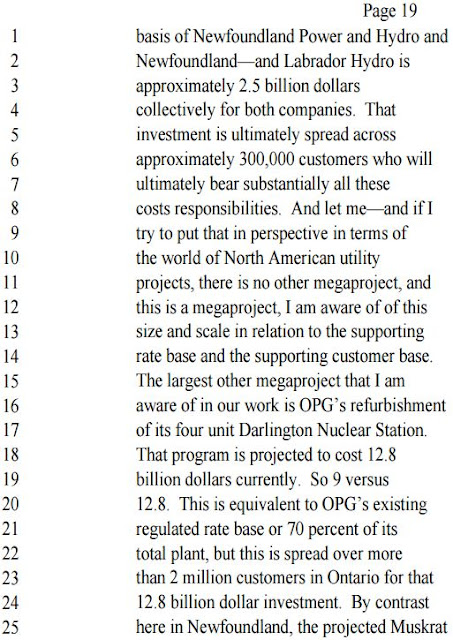 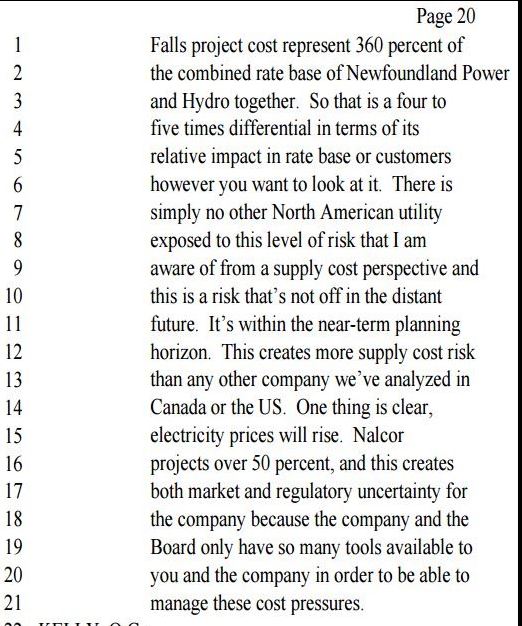 Rather startling declarations, aren't they?

Muskrat Falls represents "360 percent of the rate base of Newfoundland Power and NL Hydro combined (currently $2.5 billion)......"  (the "rate base" is the value of the assets on which the utility is permitted a rate of return, prescribed by the PUB, as the regulator).
Then there are the comments of Mr. Coyne: "...four to five times differential in its relative impact on customers....no other North American utility exposed to this level of risk....Nalcor projects over 50 percent price increase..."

If only the NP's parent, Fortis Inc. and its former CEO, Stan Marshall, had had the balls to speak up when his customers needed him to do that, prior to sanction.

I suggest, in consequence of not having the balls, the PUB should deny NP the part of the increase attributable to its claim to enhanced risk.

Companies need to understand, while their first responsibility is to shareholders, the interests of customers should not be ignored in that pursuit. Besides, in this case, NP badly miscalculated in not recognizing that the "shareholder" and "ratepayer" interests are perfectly aligned.

Such a lack of good judgment does not warrant reward.

While we thank NP for belatedly confirming what others tried hard to get them to acknowledge about the Muskrat Falls project, long ago, the PUB needs to remind the Utility that screwing up has its costs.

Newfoundland ratepayers will pay dearly for Muskrat Falls. That is a certainty.


But they should not have to pay for the same error twice!
Posted by Des Sullivan at Thursday, April 07, 2016