The only surprise contained in Moody’s decision to downgrade the Province’s credit rating from Aa3 to Aa2 was that it wasn’t lower. Whether the Ball Administration realizes it or not, Moody’s incomplete analysis of the province’s fiscal position constitutes a small break for a crowd that has so far handled the crisis with hamfisted dexterity.

Possibly it is no break at all. The “market” may well be ahead of companies engaged in the bond credit rating business.  After the U.S. mortgage meltdown in 2007/8, precipitating the U.S. financial crisis (when bondholders discovered they held useless “paper” based upon unwarranted high ratings), no one would be surprised if investors were a tad more savvy these days.

Certainly, if the recent record of borrowing by the Province — which is still dominated by short-term treasury bills (T-Bills) — is any indication, this is a place under careful scrutiny.

Still, for an outfit of Moody’s reputation, it is surprising how poorly it accounted for the so-called “equity” flowing into the Muskrat Falls project.

The CBC recently reported on an interview with Michael Yake, a vice-president and senior analyst with Moody’s, which included these comments:

….the driving factor in the downgrade has been the slump in oil prices, but that the troubled Muskrat Falls megaproject played a small role.  "It is a component," he said. The debt associated with Muskrat Falls' ballooning construction costs was not figured into the downgrade, as Moody's sees Nalcor as financially self-sufficient from the province.(emphasis added)

It seems matters fictitious are every bit as real on Wall Street as they are on Water Street.

Only the slump in oil prices bothers Moody’s? Not godawful fiscal management? Not overruns on the Muskrat Falls project?

And how does Moody's arrive at "Nalcor self-sufficient from the Province..."?

The CBC story added this notation:
"We have to recognize that there is a large debt burden building up in Nalcor as well, that ultimately the province may be responsible for," Yake said. "If we do see that the province needs to step in and start supplying ongoing, regular support payments to Nalcor for whatever reason, than [sic] that may change our definition of self-supporting."

Hasn’t most of the $5.9 billion for Muskrat Falls — the amount in excess of the $5 billion Federal Loan Guarantee and Emera's equity investment in the LIL — been raised by the Department of Finance, not by Nalcor, and the sum added to the direct debt of the province?

Yake must have been deaf when Nalcor’s Ed Martin was forced to admit that the project is off the rails and when CEO, Stan Marshall, announced a new price tag of $11.4 billion while offering no guarantee that the figure would not increase.

In addition, Nalcor lost money in the last fiscal year. And the province is sending the crown corporation funds to meet its obligations as an oil barony.

These are matters of public record. Surely Moody’s is aware of those facts.

And that is just one side of the laughable analysis that Nalcor is “self-sufficient”.

Does Moody’s subscribe to an accounting practice used by government which assumes that none of the debt raised for Muskrat should be written down, regardless of how high the final cost or the implausibility that ratepayers will be able to support the project through their power bills, even if the debt must be repaid?

On what basis is Nalcor related debt separated from the net debt of the Province, except by the accountants sleight of hand?

If the "self-sufficiency" claim has validity Moody’s must also believe that the Power Purchase Agreement (PPA), the “take or pay” arrangement designed by Nalcor to impose the full cost of the Muskrat Falls project on Island ratepayers, has the currency of enforceability.

Does the Firm not know that Stan Marshall has already invoked the necessity to find ways to reduce the 21.4-cent per KWh power connected with the new price tag, in order to avert the clear-cutting of the entire region from Clarenville to St. Anthony — as every wood stove ever abandoned to modern convenience is again pressed into service?

Isn’t Moody’s aware that Fortis Inc.’s subsidiary, Newfoundland Power, has filed an application with the PUB for a higher return on its transmission assets, fearing that “demand compression” will weaken the company’s profitability?

Does the Application not have a connection with the doubtfulness of Nalcor’s very survival as it struggles with a reality that glibness can’t obscure — the elasticity of demand?

Of course, that’s for later. It is sufficient to wonder how Moody’s got beyond the simple fact that Nalcor is a ward of the state today!

Perhaps it’s an impolite question, but I’ll ask it anyway: even after the 2007/8 economic meltdown, does bullshit still sell in New York?

You see, Moody’s rating of the Province’s credit is important, even if some think that the risk of an incomplete credit review belongs entirely to the creditors.  The public relies upon such ostensibly independent analyses as an early warning system, too. They constitute a check on the state of the province's fiscal management.

There are a plethora of reasons why the public might want to assess the state of public finances. They might even be investors.

It would not be helpful if Moody’s was insufficiently diligent with the NL file.

A compelling question is how the public should square an Aa2 credit rating with the Finance Department’s seemingly intractable problem of obtaining long-term debt financing.

Recently, this blogger obtained a response to an application under ATIPPA to the Department of Finance. It sought records of both short- and long-term financing raised since the Liberals came to power.

A review of the Exhibits (below) confirms a major reliance upon 30-60-90 day T-Bills to finance government operations. In addition, the list of bonds floated suggests that “long-term” is now interpreted to mean as short as 3, 4 and 5 years.

The Exhibits depict the daily struggle being waged within the Finance Department to meet government’s huge spending commitments. Indeed, they expose a system under threat of collapse as the result of a single hiccup in the debt markets — something totally beyond our control (except by controlling spending).

Perhaps the whole issue is moot. Perhaps Moody’s ratings, like those of its two counterparts — DBRS and Standard and Poor's — merely fill a statutory requirement having more form than function.

Whatever the case, the subtleties of the world of high finance seem to constitute the perfect counterpart to the flatfooted movements for which the Ball Government is emblematic.

Even if Moody’s has a sleepy vice-president, its brief does contain some warnings that suggest we have work to do if we want to hold onto our Aa2 credit rating.

The agency notes that “the outlook on the ratings remains negative”. It forecasts “that the province's net direct and indirect debt, relative to revenues, will approach 240% by 2020/21, the highest forecasted level of Canadian provinces.”

It states that, even if the 2016 provincial budget plan is successful, the Province will still “see deficits through 2022/23…”, that “the province's target of fiscal balance by 2021/22 will require even greater measures”, and adds that its “negative outlook also reflects the forecast that Newfoundland and Labrador will have fully exploited…” its fiscal flexibility. In other words, any tax room has been exhausted.

Hence, a reduction in revenues or the failure to meet its spending targets could result in a further ratings downgrade, within "eighteen months or less" according to Yake.

Moody's may not have figured out all the details of this province's sorry fiscal picture. But based upon the Premier's most recent comments that the fall budget  "is not about cutting" even New York will soon wonder if our bonds deserve the same ratings as our politicians.

An analysis of the borrowings listed below should make us worry the market has already drawn that conclusion. 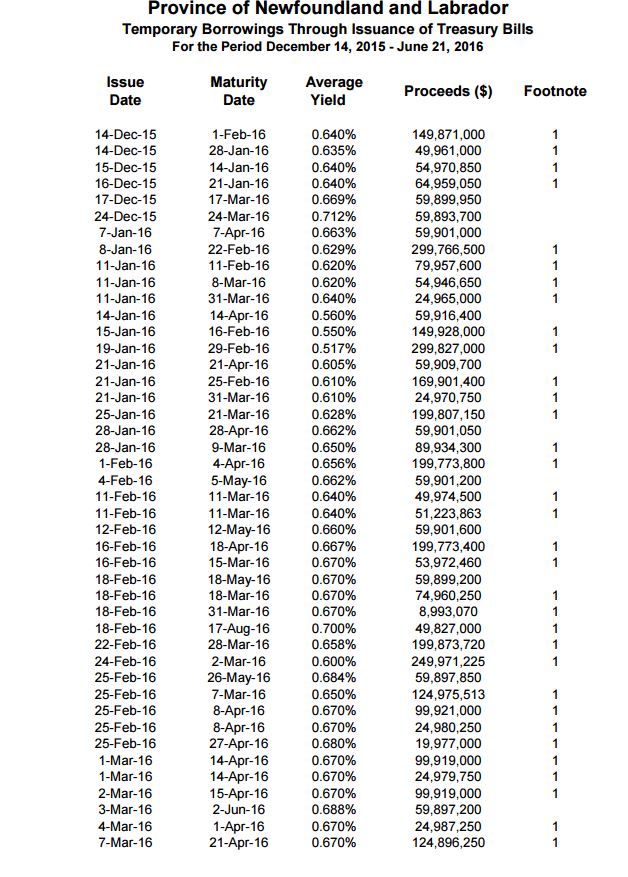 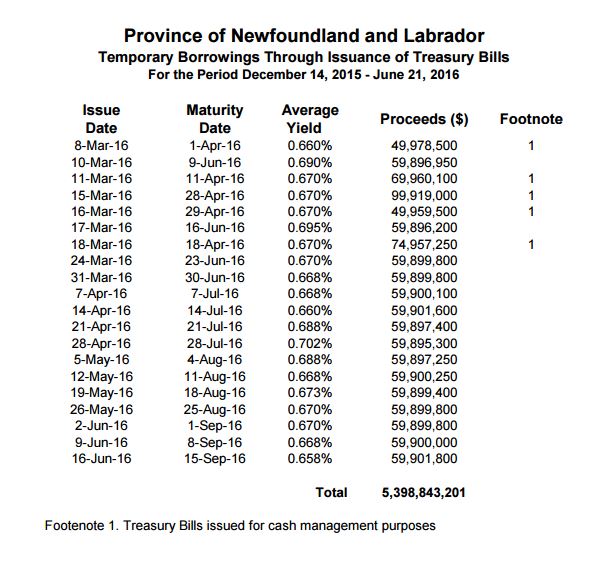