DEBBIE FORWARD SHOULD BE KINDER TO JOHN ABBOTT

Even the most politically disinterested observer had to know from the minute the Deputy Minister of Health, John Abbott, uttered the word “change” in relation to the health care system that he would be forced to eat his words — by both government and union.


What were they? “We have put in a lot of services and facilities that we no longer need and no longer can afford… We have 45 per cent more nurses than the rest of the country.”


Having gotten Nurses’ Union head Debbie Forward’s knickers in a knot, the premier’s office sent Abbott out to backtrack.


Many of us have long wondered if even one senior public servant had the spine to speak truth to power, successive governments — mostly Tory — having run the province over a fiscal cliff (note the past tense). It seems there is one such person.


It is obvious that John Abbott has been given some latitude to assess modifications to an excessively expensive healthcare system. His were not random thoughts but a series of considered reforms. The CBC story read:


“Whether you're a doctor, a nurse, a paramedic or even the operator of a private personal-care home or ambulance service, Abbott said prepare for a methodical and systematic retooling of the system over the next three to five years.”


He says “change is coming in three areas: primary care, mental health and addictions, and caring for seniors.”


The CBC added: “He talks about reducing the health workforce through attrition, reassigning health providers to where they're most needed, changing the way the four regional health authorities operate, and improving services to rural areas by increasing the number of nurse practitioners.


“The most notable change? More services delivered in the community through new primary health-care teams comprising a broad spectrum of health professionals.”


Who would argue, notwithstanding our dreadful economic situation, that such change is necessary?


Still, plans are fine. Government is full of them. Unfortunately, the Premier’s message to Abbott — and to us — is that we should not be over-confident that the government has the courage to actually do anything.


The Premier’s Office was clearly concerned only about messaging. Minister John Haggie was nowhere to be seen. He ought to have been ready to give Debbie Forward some much-needed perspective and to remind her that this Province is about to change forever.


Whether we want to accept the fact or not, some of that change will not be pretty.


In uttering admonitions like, “we don't have as productive… a nursing workforce as we should,” or that the cost of “sick leave is significantly higher” than in other provinces, Abbott might as well have been suggesting the cancellation of the ferry services. The air is instantly sucked out of the room, debate supplanted by vitriol.


To be fair, no one expects Debbie Forward to be supportive of assertions that reflect poorly on her membership. But was it really “outright betrayal of the more than 5,500 RNs in the province,” as she stated? Was it “bargaining in bad faith,” or tantamount to being “slapped in the face by this government”? What I heard was comment, not a campaign.
And aren’t those issues integral to the cost of health care delivery? Do they not have primacy against larger questions — for instance, how many nurses might be asked to take less work?


Is the status quo the only condition that is acceptable?


The following four exhibits offer a glimpse into our sorry state: overspending, government’s mismanagement of its human resource needs, and expenditures on health care relative to both the whole Country and to Nova Scotia (which also has a highly dispersed rural population). 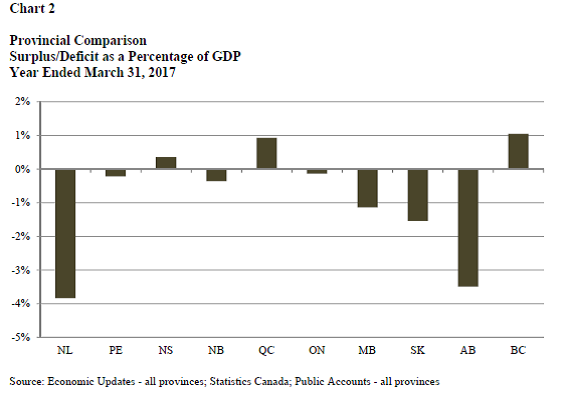 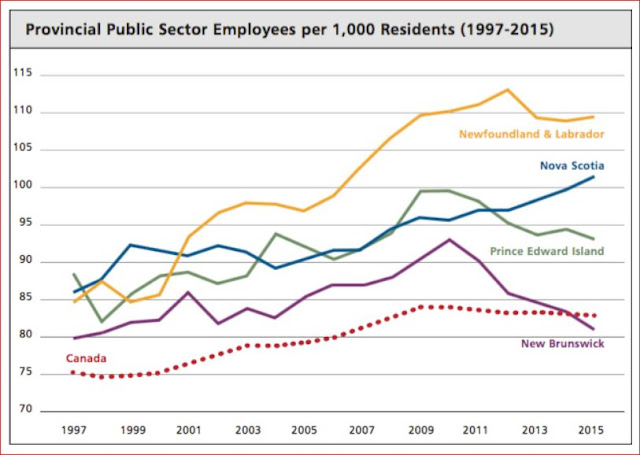 Health and Community Services represents $2.95 billion, or 40.8% of all current account expenditures in 2016-17. Health care alone represents 36% of the current account — 115% of the Canadian average — in 2016, according to Dr. Wade Locke in the above Exhibit; “… 25 per cent more for health care than the national average,” according to Abbott.
It is fine to be sensitive about some issues. As some opine, it’s not a recession until we are the ones out of a job. Fair enough. But it seems to me, given the size of the problem, that the issues Abbott raises are not the ones that should attract an excess of umbrage.
I am more inclined to think that Ms. Forward — like the government — is missing an opportunity. She is skewering discussion even before the real issues get their first breath.
Forward is right to speak up for her RNs, but she is not doing right by them if she promotes the belief that the status quo is sustainable.
If she has objections to one approach, she might propose another. Collective bargaining won’t be an option if bondholders are asked to take a haircut too.
And I have to ask: where was Debbie Forward — and likewise the heads of NAPE and CUPE — when a small cadre of politicians allowed sustainable public policy to fall into an abyss?
The Federal Budget Office likely wasn’t kidding when it reported to Parliament in October that the Province of NL needed to find $2 billion in expenditure cuts or new revenues in order to achieve sustainability. And the reader should note that that Report failed to mention the one-half billion dollars required to mitigate electricity rates in 2020.
Change is inevitable in part because we have not been good stewards of our wealth.
We are not surprised when the Finance Minister or the Premier feeds into the Liberal Party’s strategic plan — or when the Deputy Minister of Health is told to make bland utterances but, otherwise, to stay quiet. It’s just that Ms. Forward, like the rest of us, should be laughing at them, not joining them.
Finally, the debate about our fiscal future hasn’t even begun. Refusing to make the easy decisions now means that the hard ones continue to languish. The first cuts that government makes will test our passions and our patience.  They will affect health care and education; rural NL, too. The hard ones will cause riots over roads and ferries, and wars over jobs. More delay will only mean more riots, more wars.
I am not content to have life in NL subjected to the wishes of some federal bureaucrat on the Rideau. I am still hopeful that we are smarter than that.
If Debbie Forward is sensible, she will cut John Abbott some slack.
Posted by Des Sullivan at Monday, December 18, 2017