Response from Minister Disappointing
The Labrador Land Protectors presented a petition to government on May 9, 2017 calling for the appointment of an independent expert panel on the North Spur.  It was signed by more than 1000 people. There has been no response. Since that time the urgency of the panel has been raised. It has been raised by new research conducted in Sweden as well as by revelations flowing from the SNC risk assessment report released by the Premier.

The recently disclosed and disturbing SNC Lavalin risk assessment report of April 2013, released by the Premier on June 23, 2017, refers to the need for further geo-scientific information to guide remedial measures and assess overall safety and stability. SNC Lavalin rated the risk as “very high.” Whether Nalcor has successfully remediated these risks over the period from April 2013 to the present is as yet unknown. It will take the work of an independent expert panel to measure whether risks have been reduced or indeed whether they can be mitigated or eliminated.

Ron Penney and I wrote the Honourable Eddie Joyce, the Minister of Municipal Affairs and Environment,  on July 17, 2017 asking that he exercise his powers under section 44 of the Water Resources Act to cause a safety inspection of the North Spur component of the Muskrat Falls dam. In our letter we advised that Mr. Robin Dury has now finished his MSc thesis on Muskrat Falls. Dury’s conclusion is that it “does not form a safe and reliable part of the impoundment wall.” He recommends that further testing be done. We said that:
We have long felt that the only prudent approach is for government to cause an independent expert panel to be convened to review the safety of the North Spur.
Given the certain loss of life and property in Mud Lake and the lower part of Happy Valley together with the loss of the project should the dam fail, we cannot understand the reluctance of government to take this step. Given the track record of Nalcor any confidence in their work and that of their consultants is surely misplaced.
You have a unique role in this issue and the statutory responsibility to ensure the safety of the dam. If the North Spur fails the responsibility will be yours.
We were deeply disappointed with the Minister’s response. In his reply dated October 6, 2017 the Minister made reference to Section 48 of the Water Resources Act and the requirement for a dam safety report to be filed “within two years of the start of reservoir filling and a maximum of five years after that.” He said that the Department will decide on when the first report will be filed “once the Muskrat Falls reservoir has attained the fully (sic) supply level of 39m above sea level.” We find this reply disturbing and quite unrealistic. Such timing for a dam safety report is far too late and poses a threat to lives and property, recognizing that water pressure rises in proportion to the square of the increased supply level. Surely a dam safety report should be conducted before the reservoir is flooded as well as after it has been impounded.
A copy of our letter to the Minister is attached as Annex A". The Minister’s reply is in Annex "B".
In his letter the Minister states “independent third parties including MWH International and Hatch have also reviewed the North Spur stabilization design”. This is not the role of MWH, the Independent Engineer.  Nalcor, in their July 17, 2017 reply to our 20 questions responded to question 19 as follows, confirming Nalcor’s agreement that this is outside of their mandate. “It is not the mandate for the Independent Engineer to approve any aspect of the design.”
Hatch, on the other hand, has been involved in work on  the North Spur going back at least to 2008, so they do not bring the “cold eyes” perspective which is required. Their work included dam break studies, assessment of the existing wells and pumps as well as a three dimensional hydrogeological study.
We are also concerned that the Minister is relying so heavily on the Dam Safety Guidelines, which are intended for man-made structures and not remediated natural dams.
So if we cannot rely on Hatch or on MWH International who else reviewed the work. We had understood that Drs. Serge Leroueil and I. M. Idriss had reviewed the geo-technical design work.  On July 17, 2017 we were by informed by Nalcor that no such reviews have been conducted:
Geotechnical design was not reviewed by Leroueil and Idriss. These two external experts were part of the study to ensure the design is in accordance with the expected seismic loading. Leroueil is a worldwide expert in sensitive clay behaviour and Idriss is the same in impact of dynamic on the soil behaviour. Both experts gave advice while the study was underway. Idriss gave a presentation and report during and after the study was completed.
Neither Dr. Leroueil nor Professor Idriss has reviewed the geotechnical design. The question then becomes – who has?


Conclusion
This confirms the need for such independent reviews which we believe should be conducted by an eminent panel of geo-technical experts and not by an engineering company.
We were disappointed that the Minister’s reply gave no deference to the work of Dr. Stig Bernander or to that of Dr. Lennart Elfgren and his graduate student Robin Dury.
Muskrat Falls is the only hydroelectric project in the world which relies on a large natural dam, underlain by sensitive glacial clays, and raising major concerns for local communities. Experts from the Geological Survey of Canada documented the extensive presence of glacial marine clays in the Lower Churchill in their testimony to the joint federal-provincial environmental panel.
Risk assessment using the “limit equilibrium” model upon which Nalcor and its consultants rely concludes that the glacial clays at the North Spur do not impose a high risk of failure to people living and working in the region. However, Dr. Stig Bernander advised that the methodology used to evaluate the safety and stability of the North Spur is not valid because the soil conditions at Muskrat Falls do not fit within the assumptions necessary for applying limit equilibrium analysis.
Robin Dury, in his recent Master’s Thesis at the Lulea University of Technology, has applied the more modern dynamic modelling that Dr. Bernander considers necessary to evaluate the North Spur. He concludes that the rise in the water level from 17 m to 39 m may trigger a landslide and that the “North Spur does not form a safe and reliable part of the impoundment wall.” This confirms Dr. Bernander’s conclusion that further study, including field investigations, are needed to ensure that the Muskrat Falls project can rely upon the safety and stability of the North Spur. The critical load bearing capacity of the natural dam will not be able to stand up to the pressure, which could exceed twice the capacity, which means the North Spur could fail when the reservoir is filled, based on Dury’s research. Dr. Bernander has reaffirmed these conclusions in his recent report summarized by PlanetNL with a link provided by Uncle Gnarley.
_______________________________________________________
Related to this post:
Must the People of HV-GB and Mud Lake Learn to Live in Harm's Way
Terrifying Conclusion Follows Release of New Bernander Report on North Spur
_______________________________________________________
The risk of failure cannot be dismissed on the basis of the research undertaken to date, which must be updated, using the most modern models, applying tools which take full account of soil porosity and allow for realistic assumptions on “soil deformation behaviour”. Unless this more modern and advanced approach is applied to model the dynamic properties of sensitive soils under stress we cannot claim that the North Spur is safe.
We have to entertain the possibility that the natural dam is not safe and cannot be remediated. This would be the worst case and most unthinkable scenario, requiring that the province write off its full investment at the generation site. In this context it is important that the research be updated as soon as possible. If remediation is not possible then the project should be terminated.
It is alarming that the response from the Department of Municipal Affairs and Environment is so seriously flawed and so clearly dependent upon the counsel of Nalcor Energy, whose expertise in these matters is highly suspect. As we said in our July letter to the Minister, given the track record of Nalcor, any confidence in their work and that of their consultants is surely misplaced.
An independent review of the geo-technical research and remediation for the North Spur should be embraced openly as a prudent course of action. This review should be initiated by government, given Nalcor’s defensive posture and its failure to take action on its own.


The government of Newfoundland and Labrador should appoint an independent panel of geo-technical experts to conduct the review necessary to ensure that the North Spur is safe.

We are writing to ask you to exercise your powers under section 44 of the Water Resources Act to cause a safety inspection of the North Spur component of the Muskrat Falls dam.

Mr. Robin Dury has now finished his MSc thesis on Muskrat Falls and it is now available at: http://ltu.diva-portal.org/smash/get/diva2:1117330/FULLTEXT02.pdf  . His conclusion is that it “does not form a safe and reliable part of the impoundment wall.” He recommends that further testing be done.

We have long felt that the only prudent approach is for government to cause an independent expert panel to be convened to review the safety of the North Spur.

Given the certain loss of life and property in Mud Lake and the lower part of Happy Valley together with the loss of the project should the dam fail, we cannot understand the reluctance of government to take this step. Given the track record of Nalcor any confidence in their work and that of their consultants is surely misplaced.

You have a unique role in this issue and the statutory responsibility to ensure the safety of the dam. If the North Spur fails the responsibility will be yours.

It is time for you to act.

Annex "B" - Response From Minister 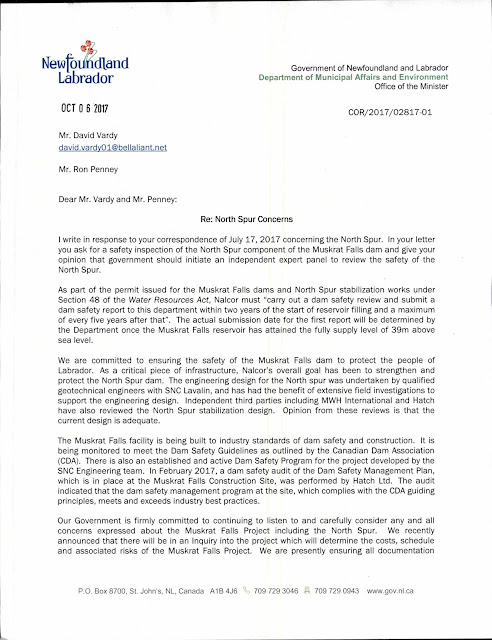 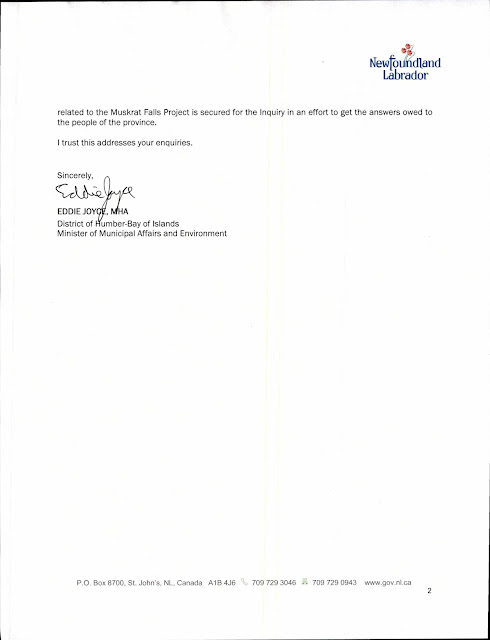